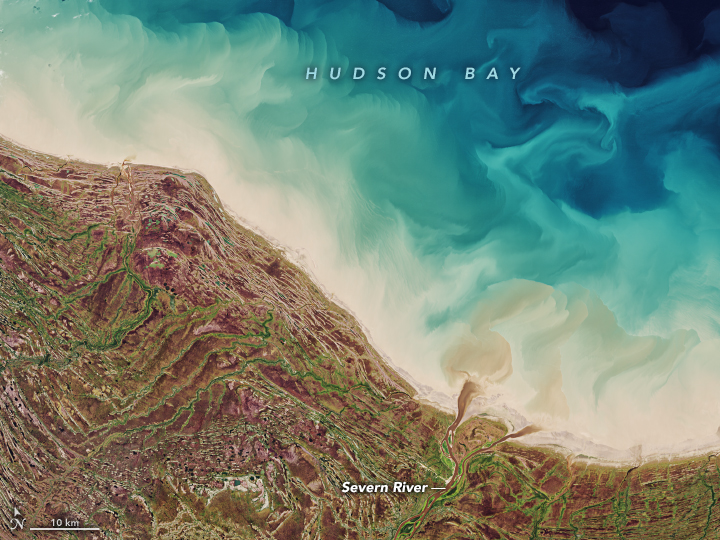 Ice lingered on Hudson Bay as recently as July 2020 and will start to freeze up again in autumn when snowfall and chilly breezes return. In the meantime, this image captures the unique beauty of the region in late summer.

Located in northeastern Canada, just south of the Arctic Circle, Hudson Bay is the world’s second-largest bay and spans 1,230,000 square kilometers (470,000 square miles). This image, acquired on September 19, 2020, with the Operational Land Imager (OLI) on Landsat 8, shows the bay’s southern side where it is bordered by Ontario Province.

The saltwater bay receives fresh water from more than 40 major rivers that flow through various ecosystems and zones of permafrost. The rivers carry sediment and dissolved organic matter, which colors the water brown. In this image, a small dark brown plume is visible at the mouth of the Niskibi River, while a more prominent plume from the Severn River flows around Partridge Island. There is also ample sediment from the seafloor that has become suspended in the water.

According to Robie Macdonald, a scientist at the University of Manitoba, the colorful swirls occur as fresh water from land enters the bay and drives a cyclonic circulation. This circulation moves material around the shallow coastal zone from the northwest to the southeast corner of the bay, and out into Hudson Strait. Part of that transport process is visible in this image.

The coastal lands are equally interesting, telling a story about how landscape responded after the last ice age. At the height of the last ice age, ice sheets spanned much of Canada and parts of the northern United States. The weight of the Laurentide ice sheet, centered over Hudson Bay, depressed the surface of the land. Then, as the ice sheets melted at the end of the ice age, the land started to rebound—a process that continues today.

The rebound led to a series of abandoned beaches, visible in this image as a sequence of near-linear ridges and spits separated by flatter areas. Lynda Dredge, an emeritus scientist with the Geological Survey of Canada, noted that the oldest and highest beaches farthest inland developed about 7,500 years ago when the bay’s relative sea level was about 130 meters (430 feet) above its present level. As the land rebounded and relative sea level dropped, old beaches were left behind. The process continued, forming successively lower beaches all the way down to the present sea level.

The landscape is still evolving as the land continues to rebound. According to Dredge: “Future beaches will form in the area now covered in tidal flats.”