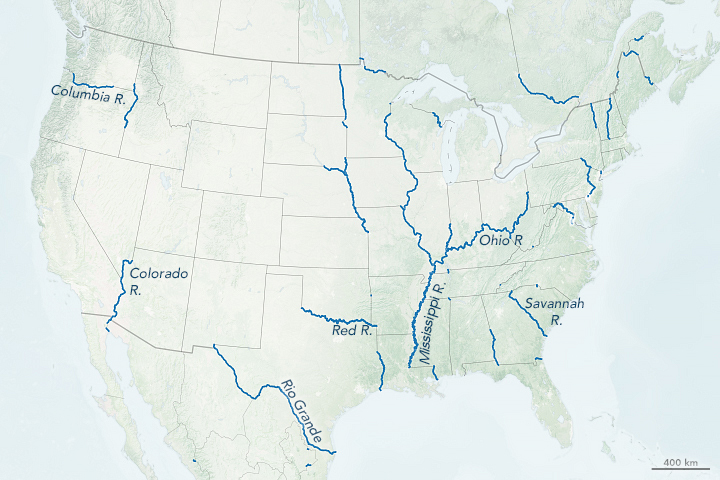 For thousands of years, rivers have shaped the world’s political boundaries. A new study and research database by geographers Laurence Smith and Sarah Popelka details the many ways that rivers shape modern borders.

The researchers merged a global database of large rivers (30 meters or wider)—derived from 7,300 Landsat scenes—with maps of international, state, and local boundaries. In the process, they created a new database of river borders that has interesting historical elements, but also relevance for modern management of water, land, and pollution.

According to the analysis by Smith and Popelka, rivers make up 23 percent of international borders, 17 percent of the world’s state and provincial borders, and 12 percent of all county-level local borders. The map at the top of this page, based on their database, shows all of the U.S. states with borders defined by rivers (in blue). Generally eastern, more densely populated states have more river borders. While no state is entirely bounded by rivers, a few come close, notably Vermont, Iowa, Texas, Minnesota, and Illinois. The very short borders that look more like dots than lines, such as the one along the Oklahoma-Arkansas border, are places where large rivers cross a state border but only follow the border for a short distance.

In the United States, rivers and their watersheds have a long history of defining both national and state borders. The Royal Proclamation of 1763 used the topographic divide between the Mississippi River basin and east-flowing Appalachian headwaters to help define the original U.S. colonies, an approach that left its legacy on the shape of several eastern seaboard states, including Virginia, North Carolina, and South Carolina.

The Moderate Resolution Imaging Spectroradiometer (MODIS) on NASA’s Terra satellite acquired an image (below) of the confluence of the Mississippi and Ohio rivers, a place where Kentucky, Illinois, and Missouri come together in a tripoint. A few hundred kilometers upstream there is another tripoint where the Wabash River joins the Ohio River and Kentucky, Illinois, and Indiana come together. 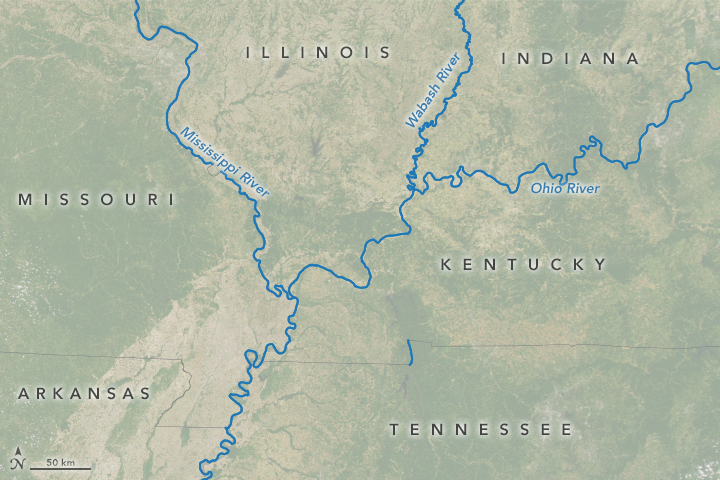 There are echoes of European colonialism in the world’s state and local borders. Former colonial territories like the eastern United States, Canada, and Australia have large numbers of state and local borders defined by rivers. “European explorers, cartographers, politicians, and diplomats found rivers to be a convenient way of dividing up territorial claims,” explained Smith, who is now a professor at Brown University but was at the University of California, Los Angeles, when he started the project. “Straight line borders of longitude and latitude were more commonly used in uncharted areas, like the western part of the United States and Australia.”

While using rivers to divide states may seem conceptually simple, the natural tendency of river courses to change over time has caused complications. If you look carefully at maps and legal history, there are numerous territorial oddities and disputes that have arisen over the years.

For instance, a series of earthquakes in 1811-12 shifted the course of the Mississippi River in a way that stranded two Tennessee towns—Corona and Reverie—west of the river in what seems like it should be Arkansas. Upstream, the same earthquake, and a lack of precision by early surveyors, left a bit of land known as the Kentucky Bend completely surrounded by parts of Missouri and Tennessee. Meanwhile, Kentucky and Indiana have engaged in a protracted debate about which state owned a piece of land near Evansville that connects to Indiana if the river is low but becomes an island if water is high.

While the new river border data sheds light on some interesting aspects of history, Smith and Popelka hope it will help address some modern concerns. Since rivers often sit between states, cities, and counties, they are often at the center of complex political controversies involving dams, irrigation, hydropower, flood management, and water pollution. “Given the multitude of stakeholders in river basin management, there is a clear and pressing need to identify them at multiple geographic scales, so that all stakeholders may be considered in riparian water policy decisions,” they wrote.

While many other researchers and organizations have studied the role rivers play when they serve as international borders, there has been much less attention on rivers as state and local borders. “To my knowledge, this is the first time anybody has quantified the influence of rivers on state and local borders on a global scale,” said Smith in reference to recently released Global Subnational River-Borders (GSRB) data.