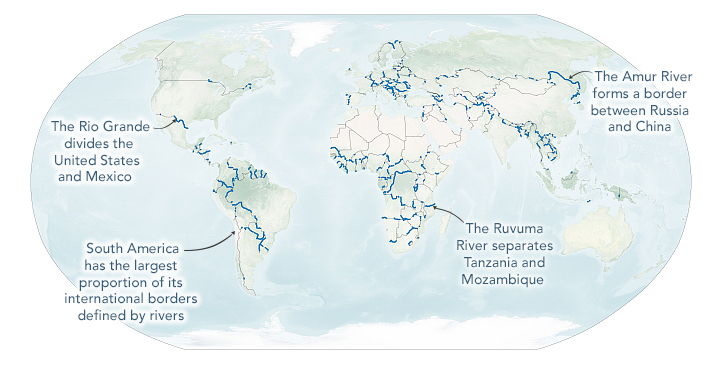 When Rivers are Borders

Rivers have long united people, so much so that a world without rivers would be unrecognizable. By providing fresh water, fertile land, and food—along with a convenient way to transport goods—rivers have long determined the locations of towns, cities, and ultimately entire civilizations.

Fertile river valleys were cradles to four of the earliest civilizations: the Tigris and Euphrates in Mesopotamia, the Nile in Egypt, the Indus in South Asia, and the Yangtze and Yellow in China, explained Brown University geographer Laurence Smith.

At the same time, rivers have long been used to divide lands. After visiting multiple rivers around the world, Smith became fascinated by the concept of the waterways as political borders. However, he also was surprised to find that little quantitative research on river borders is available—and even less that makes use of modern geospatial mapping techniques. With the help of Sarah Popelka, a student at UCLA, he set out to change that.

After several years of work, the researchers have released a new geospatial database of the world’s river borders—Global Subnational River-Borders (GRSP). As detailed in the journal Water Policy, Popelka and Smith merged political border and population density data with a map of large rivers (30 meters or wider) derived from Landsat data, making it possible to identify and map political borders at both national and subnational scales.

Since rivers often sit between states, cities, and counties, they are routinely at the center of complex political controversies involving dams, hydropower, irrigation, flood management, and water pollution. “If a watershed were entirely within one jurisdiction, it would make many problems easier to address, but that is simply not the reality,” Smith said. “One of the reasons we developed this dataset is that identifying subnational as well as national stakeholders with explicit geospatial mapping is an important first step toward the development of holistic river management.”

The map above highlights in blue all of the international borders defined by large rivers. The map below highlights several key rivers that define borders between Paraguay, Brazil, Argentina, and Uruguay. 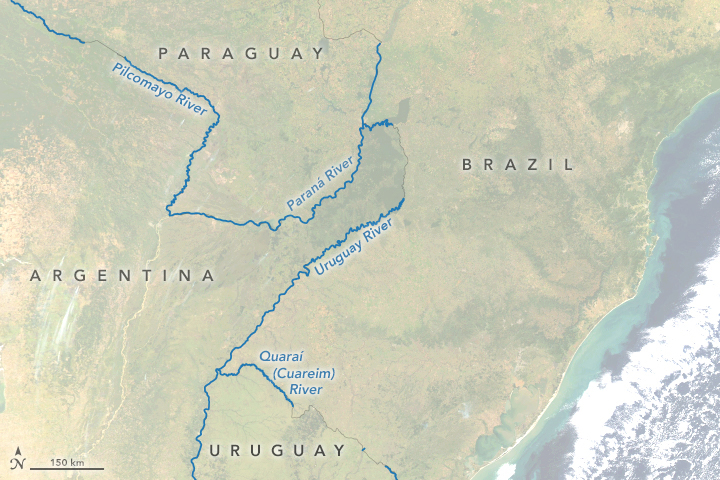 North America (28 percent), Africa (26 percent), and Europe (21 percent) also have sizable percentages of borders defined by rivers. For North America, the Rio Grande, which separates Mexico and Texas, accounts for much of that. But the Pigeon River serves as the boundary between parts of Ontario and Minnesota; the Saint Lawrence divides Ontario and New York; and the Saint John River forms part of the boundary between New Brunswick and Maine.

Rivers also serve as borders in several African countries: Benin, Nigeria, Senegal, Mauritania, and Niger in West Africa; the Central African Republic, the Democratic Republic of the Congo, Tanzania, and Mozambique in Central Africa; and Botswana, Zambia, Zimbabwe, and Namibia in Southern Africa. In Europe, Spain, Portugal, France, Germany, Poland, Norway, Bosnia, Romania, and Ukraine are just some of the many countries with international border rivers.

The patterns are not random. Smith explained that the continents where European powers established colonies and exerted great influence tend to have more borders defined by rivers because European explorers, cartographers, politicians, and diplomats found rivers to be a convenient way to divide territories. Asia, in contrast, has fewer river borders than other continents (16 percent) because European influence and colonialism was more limited. The exception is South Asia, where Great Britain and France remained colonial powers into the 20th century.