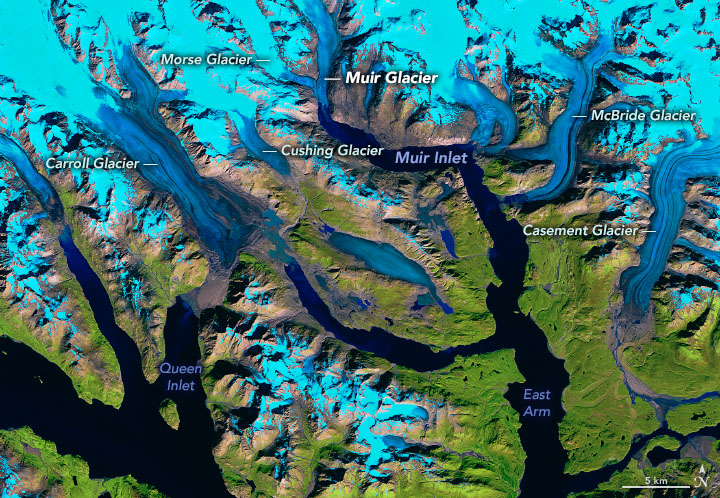 In 1750, around the time the Little Ice Age reached its maximum, Glacier Bay in southeast Alaska was entirely filled with ice. When Captain George Vancouver sailed there in 1795, the glacial ice had pulled back to expose five miles of the bay—all part of a tidewater glacier’s natural life cycle of advance and retreat. By the time naturalist John Muir explored and documented the region in 1879, the ice front had retreated 45 miles.

Today, the ice has retreated more than 60 miles (100 kilometers), and most vestiges of the original glacier now terminate on land. Just a handful of glaciers still flow into Glacier Bay and dispense icebergs—a type of glacier known as “tidewater glaciers.” Only one—McBride Glacier—still flows into the bay’s East Arm.

The past few decades of glacial retreat are visible in the images above, acquired on September 6, 1986, with Landsat 5, and September 17, 2019, with Landsat 8. Snow and ice are blue in these false-color images, which use different wavelengths to better differentiate areas of ice, rock, and vegetation. The images are centered on Glacier Bay’s East Arm, which extends north past McBride Glacier and northwest into Muir Inlet. (Part of the bay’s West Arm is visible at the bottom-left.)

Muir Inlet, Glacier Bay, and the surrounding land are part of Glacier Bay National Park. Around the time the park was established in 1980, most visitors viewed its glaciers from the vantage point of the water, where tidewater glaciers dropped huge slabs of ice into the bay. But the retreating glaciers, many of which now terminate on land, have changed how visitors experience the park.

“Recent retreat has been influenced by rapidly warming air and water temperatures,” said Andrew Bliss, a glaciologist with the National Park Service. “In the East Arm, all of the glaciers are retreating; in the West Arm, a few glaciers are stable or advancing slightly.” 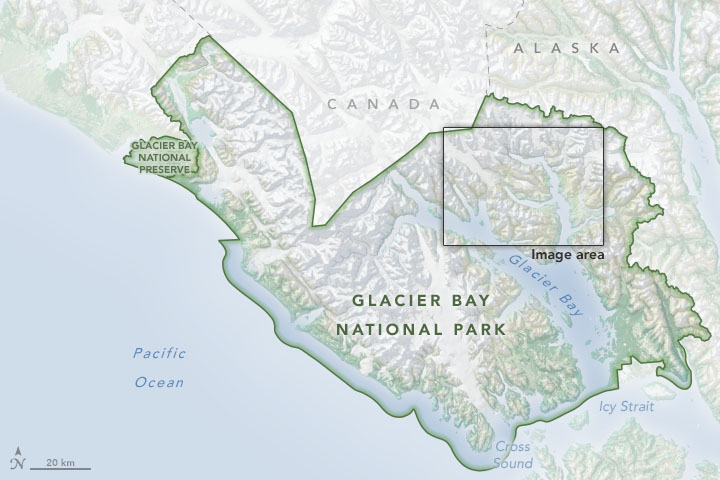 One of the most notable retreats has occurred at Muir Glacier, which lost its tidewater terminus. That is, the glacier now ends on land instead of the water, where it once calved some of the park’s most impressive icebergs.

“This retreat caused a major change in visitation patterns,” said Tania Lewis, a wildlife biologist and research coordinator at the park. Prior to the late 1980s, Muir Glacier was the main destination for visitors who wanted to view calving glaciers, icebergs, and the bay’s wildlife. The park’s daily tour boat visited Muir Inlet exclusively until 1987, when the retreat of Muir Glacier onto land caused tours to reroute into the West Arm of Glacier Bay instead. “Basically, the grounding of Muir Glacier marked the end of the heyday of tourism in Muir Inlet,” Lewis said.

Southeast of Muir Glacier, McBride is the last tidewater glacier in the bay’s East Arm and the only remaining source of icebergs in this part of the bay. But that glacier is continuing to retreat. In 1998, Lewis spent six weeks near the terminus of McBride Glacier, where she studied harbor seals. “At that time, the inlet was only about a mile long and usually full of ice on which harbor seals hauled out, gave birth, and nursed their pups,” Lewis said. 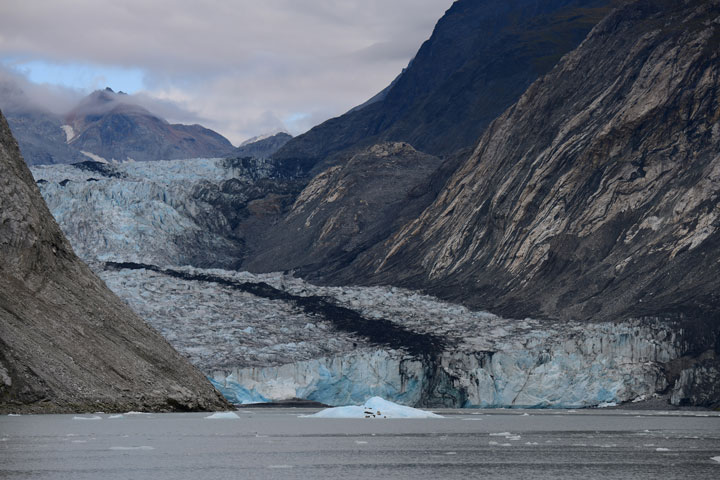 The inlet leading to McBride Glacier now measures more than three miles long. “I went into McBride Inlet again last summer for the first time in over 10 years and was blown away by how far back it was, and how long the newly exposed inlet is,” Lewis said. During that visit she saw one large iceberg with some harbor seals on it, visible in the photograph above. “Once McBride Glacier is grounded and is no longer tidewater, there will be no ice habitat left for seals in Muir Inlet.”

The changes to the park’s tidewater glaciers are dramatic, providing visitors and scientists with a stark view of how ecosystems respond to ice retreat and a changing climate.