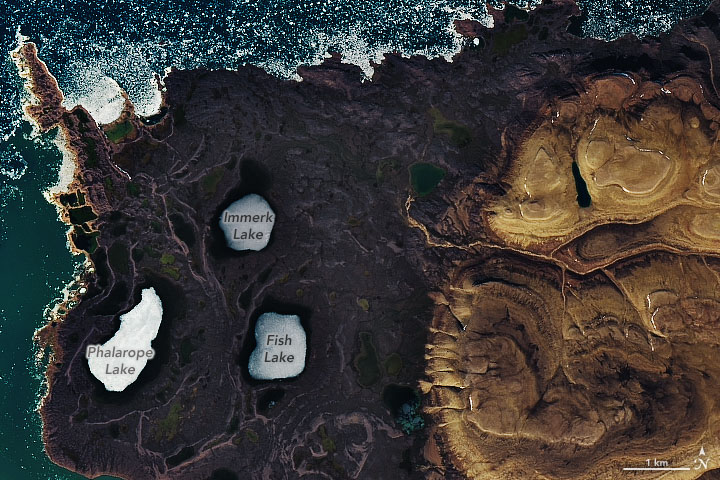 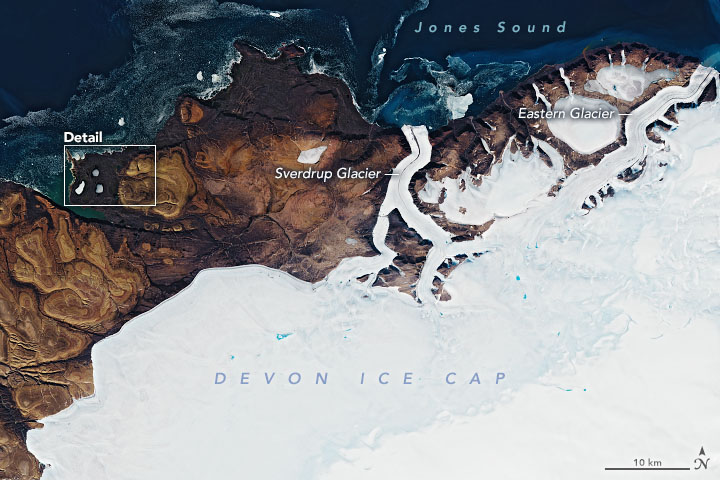 Today’s story is the answer to the Earth Observatory July puzzler.

Because the atmosphere is about 100 times thinner and less dense than on Earth, weather on Mars is defined by its extremes.

Near the equator, daytime highs regularly exceed the freezing point, occasionally rising above 15 degrees Celsius on summer days (into the 60s in Fahrenheit). But even during the hottest part of summer, nighttime temperatures regularly plummet below -75 °C (-100°F) because of how little heat the atmosphere can retain. Near the poles, the cold is even more punishing, with wintertime lows that drop below -120°C (-184°F).

Nonetheless, Eric Vaz thinks that someday certain hardy plants from Earth could be grown on Mars. “In fact, I think we will need to bring plants and think about terraforming if we are serious about having people live on Mars,” said Vaz, a professor of geographical analysis at Ryerson University. Plants could play a role in life-support systems because they recycle water and oxygen while filtering out carbon dioxide. Vaz recently co-authored a study, published in Life Sciences in Space Research, that lays out a new framework for small-scale terraforming on Mars.

The Martian atmosphere is 95 percent carbon dioxide, with just trace amounts of oxygen and water vapor. Since terraforming Mars on a global scale would be extremely difficult with current technology, Vaz instead envisions a future in which terraforming would happen in small enclosed areas.

Vaz and one of his graduate students used 30 years of global weather data from WorldClim 2 and elevation data from the U.S. Geological Survey to identify and analyze the places on Earth with conditions most similar to those found on Mars. Using geographic information system (GIS) tools to analyze global temperature, precipitation, elevation, and solar radiation data, they identified certain areas in the Canadian Arctic and Antarctica that have conditions more similar to Mars than any other places on Earth. Parts of Canada’s Devon Island, for instance, have temperatures that often exceed 10°C (50 °F) in the summer, yet drop as low as -50 °C (-58 °F) in the winter.

After sorting through an extensive database of plant species from the Global Biodiversity Information Facility, Vaz honed in on certain plants that he thinks people might want to eventually bring to Mars. Among the most promising were in the Bryophyte phyla—small plants like mosses, liverworts, and hornworts—and the Tracheophyta phyla—vascular plants such as ferns and horsetail. The most promising candidate proved to be the genus Poa, a group of perennial grasses with hundreds of different species. In addition to being able to handle frigid temperatures and intense solar radiation, Poa would take up minimal space, require little maintenance, and could produce large quantities of seeds, explained Vaz.

The natural-color satellite image above shows the Truelove Lowlands—one of the areas on Devon Island that has conditions similar to those on Mars. It is also an especially lush part of the island and home to Poa arctica (arctic bluegrass) and Poa abbreviata (short bluegrass) . Unlike the Devon Ice Cap to the east, these lowlands are known for a having a milder and more hospitable microclimate than other parts of the island because nearby cliffs help regulate the temperature. In addition to the plants that carpet the surface in the summer, Truelove Lowlands attracts populations of muskoxen, foxes, and polar bears. The image was acquired by the Operational Land Imager (OLI) on Landsat 8 in July 2020.

Vaz cautions that he does not expect to see arctic bluegrass growing on Mars anytime soon, but he is optimistic about the future, given NASA’s long-term plans to send astronauts to Mars and a series of satellites and rovers to the Red Planet.

“Looking outside of Earth opens up the idea that we must be a species going to different places to survive. We are travelers. We need to think outside of our confinement,” Vaz said. “There are enormous technological challenges that will have to be addressed before bluegrass or any other plants will be grown on Mars, but the good news is that we already have incredible geospatial tools and databases of environmental data that we can start using today to start working on the problem.”