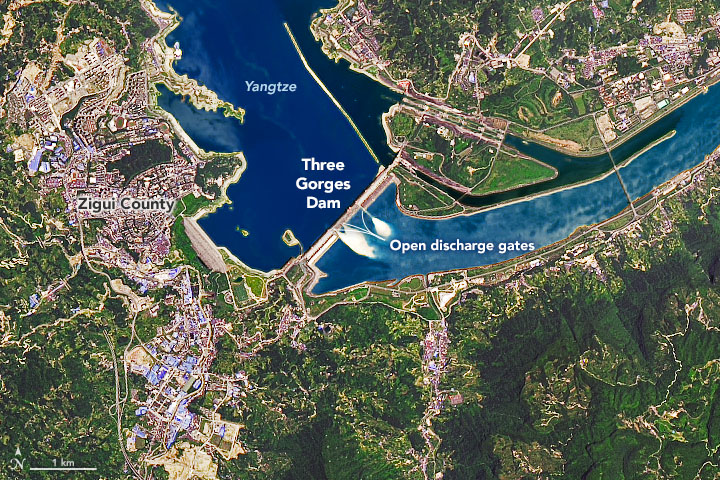 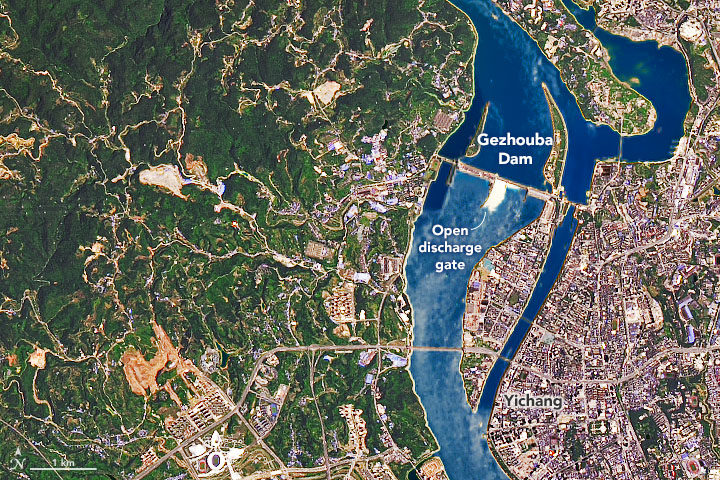 Since the start of Asia’s summer monsoon season on June 1, 2020, excessive rainfall has pushed lakes and rivers to record high levels in China. Flooding within the Yangtze River Basin, in particular, has displaced millions of people.

The Yangtze River is Asia’s longest, winding 6300 kilometers (3,900 miles) through China. Together with its network of tributaries and lakes, the river system has undergone significant development as a means to generate power, store water for drinking and irrigation, and control flooding. Today the watershed is dotted with tens of thousands of reservoirs, and its rivers are spanned by numerous dams.

During the 2020 summer monsoon, floodwater was being held, or “absorbed,” by 2,297 reservoirs in the region, including the one behind Three Gorges Dam. In an attempt to regulate the flow of floodwater, dam operators can discharge water through spillway gates.

Those gates were open when these images were acquired on June 30, 2020, with the Operational Land Imager (OLI) on Landsat 8. The images are composites of natural color and shortwave infrared to better distinguish the water. Note how the torrent flowing through the spillways changes how the water downstream reflects light, making it appear whiter.

The image at the top of this page shows water moving through the gates of Three Gorges Dam. Spanning a segment of the Yangtze River in central China’s Hubei Province, the dam is 2300 meters long and stands 185 meters high. The second image shows the smaller Gezhouba Dam, located about 26 kilometers (16 miles) southeast from Three Gorges. This dam also appeared to have its spillway gates open.

When these images were acquired in June, the waterways were trying to handle the first major flooding of the monsoon season. A second wave of severe flooding, referred to by local media as the “No. 2 flood,” hit the region in July. Between and during these flood events, continuous adjustments are made to the amount of reservoir outflow flowing through the gates.

According to the Three Gorges Corporation, the water level in the reservoir reached a record high flood season level of 164.18 meters on July 19. The previous high level reached during the flood season since the dam became fully operational in 2012 was 163.11 meters. The reservoir is designed to hold a maximum water level of 175 meters.