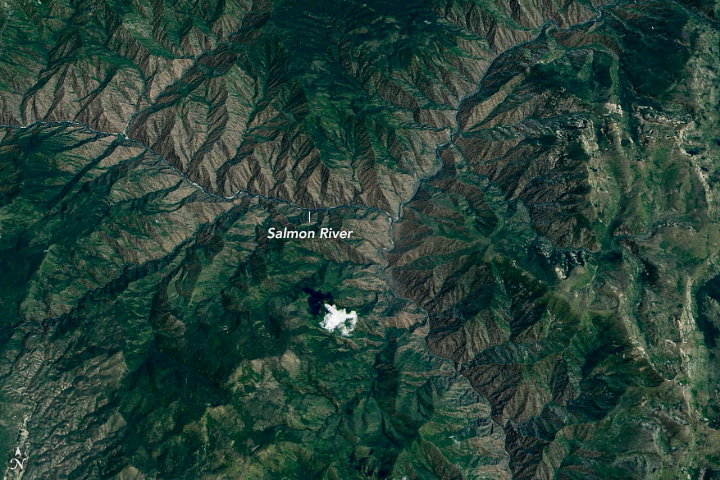 The River of No Return

The Salmon River is among the longest free-flowing rivers in the United States. On its 425 mile (684-kilometer) course from the Sawtooth Mountains through central Idaho, not one functioning dam impedes its flow.

The river begins on the north slope of Norton Peak as a trickle, but soon swells into a roaring torrent as it absorbs runoff from multiple ranges. Over hundreds of millions of years, the river has carved some of the deepest gorges in the United States, some of which have more vertical relief than the Grand Canyon. The only deeper gorge in North America is nearby Hells Canyon.

On July 24, 2019, the Operational Land Imager (OLI) on Landsat 8 acquired this natural-color image of a rugged section of a canyon near the confluence of the South Fork and the Salmon River. Notice how it lacks the straight, sheer walls of the Grand Canyon. Instead, the water slowly carved a geologic wonderland of wooded granite ridges, eroded bluffs, and scattered stone towers and crags. 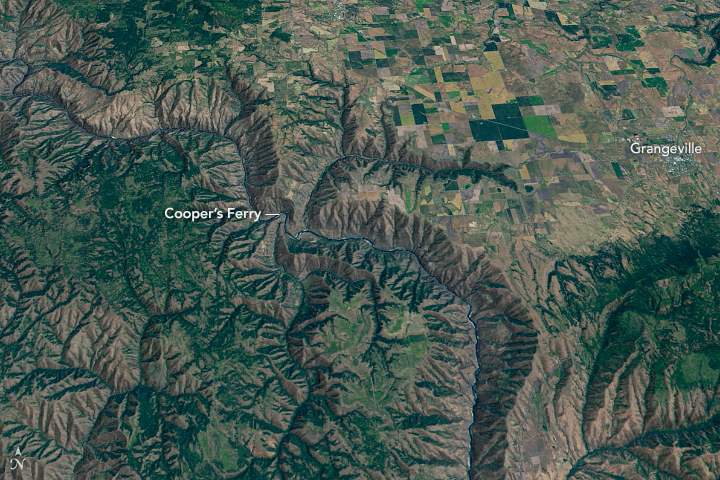 The river proved a daunting obstacle for early explorers and pioneers. On August 23, 1805, Lewis and Clark’s dream of finding a water route across North America ended in failure when a scouting party led by the Shoshone guide Swooping Eagle and William Clark turned back after observing a tumultuous scene with the river “roiling, foaming, and beating against the innumerable rocks which crowded its channel.”

When gold miners and lumberjacks flocked to the area in the 1860s, they had so much trouble getting boats up the river that it simply became known as “the river of no return”—a name that stuck. After Congress set aside land along the riverbanks for conservation in 1980, they called it the Frank Church - River of No Return Wilderness. Protecting 2,366,757 acres, it is the largest contiguous wilderness area in the Lower 48 United States.

Ancient artifacts found along the Salmon River at Cooper’s Ferry add yet another dimension to this remarkable river valley. In 2019, archaeologists from the University of Oregon announced they had discovered bones, charcoal, and spears that radiocarbon dating indicated to be more than 16,000 years old—one of the oldest archaeological sites in the U.S.

The discovery added to a growing body of evidence that the first people to reach North America may have arrived by boat rather than over a land bridge connecting to Siberia. At that time, the Salmon River valley would have been free of ice, making it what archaeologists have described as a logical “off-ramp” for groups from Asia traveling to North America by boat.