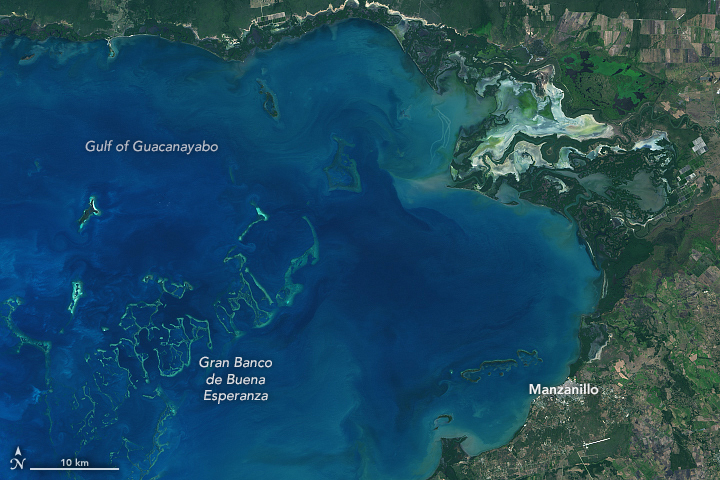 Editor’s note: This Image of the Day is the answer to our June 2020 puzzler.

About one-quarter of the planet’s marine species depend on the food and shelter provided by tropical coral reefs—habitat that spans just one percent of the ocean floor. You can find almost 8 percent those reefs growing in Caribbean Sea, including this one visible near the southern coast of Cuba.

The image was acquired on January 14, 2020, with the Operational Land Imager (OLI) on Landsat 8. The reef, known as the Gran Banco de Buena Esperanza, has grown into an elaborate structure, sustaining coral species that have adapted to the Gulf of Guacanayabo’s turbid, muddy environment.

Gran Banco de Buena Esperanza spans 25 by 40 kilometers of the central part of the bay. The reef’s pattern is “reticulate”—that is, the corals have grown into a maze-like network of ridges with interspersed with ponds and channels.

Notice how the coral reef appears light green in contrast with the gulf’s darker blue-green water. These are the tops of steep ridges where the reefs have grown as much as 25 meters above the seafloor. The reefs actually extend another 50 meters below modern-day seafloor. Over thousands of years, sediments have accumulated and left two-thirds of the structure buried in mud, sand, and clay. Many of those sediments are carried into the bay as outflow from the Río Cauto—Cuba’s longest river. 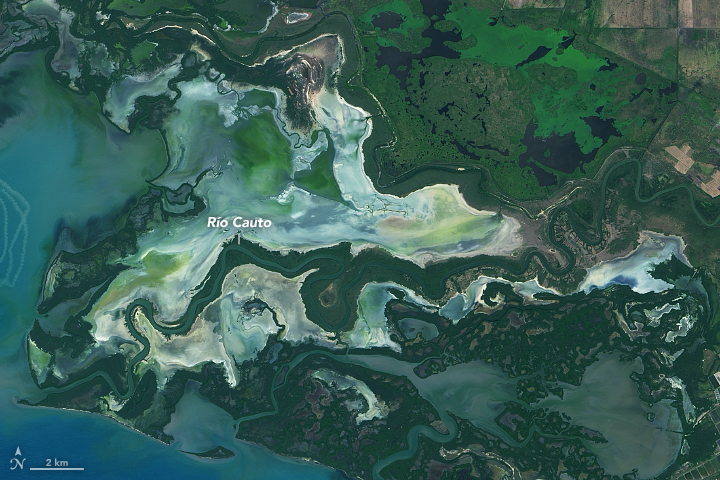 The second image, also acquired on January 14 by Landsat 8, shows a detailed view of the Río Cauto. Over time, sediments from the river have built up the delta (Cuba’s largest), which has evolved into a network of estuaries, lagoons, marshes, and swamps. Nutrients from the delta have helped make the Gulf of Guacanayabo productive for fisheries.

In 2002, the Río Cauto Delta was named a Ramsar site—an internationally recognized wetland of importance. The delta is home numerous species of mangroves, as well as the endangered Cuban parakeet and Cuban tree-duck.