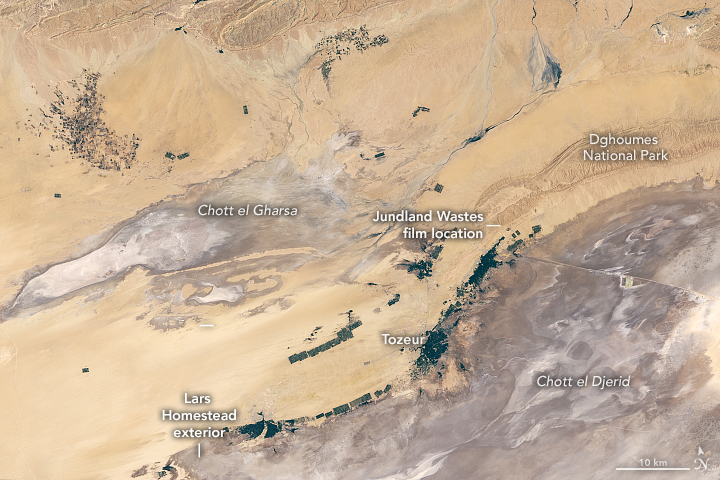 In a Desert Not So Far Away

Editor’s note: This Image of the Day is the answer to our May 2020 puzzler.

The vast salt pan and ephemeral lake of Chott el Djerid makes a stark contrast with the sandy terrain of southwestern Tunisia. The crust of dried sediment, salt, and other evaporite minerals coating the nearly flat lakebed are part of what gives the opening desert scenes of the 1977 Star Wars movie, Episode IV: A New Hope, such an ethereal, otherworldly feeling.

Key parts of the movie are set on Tatooine, a desert world that was named after a Tunisian town southeast of Chott el Djerid. The domed house where hero Luke Skywalker was raised on a moisture farm still stands on the remote northern edge of the lakebed today, thanks in part to being refurbished in 2012. The Lars Homestead set, the place where Luke looked out over a binary sunset and dreamed of adventures in space, is a bit too small to be visible in this natural-color satellite image, but the lakebed is hard to miss. 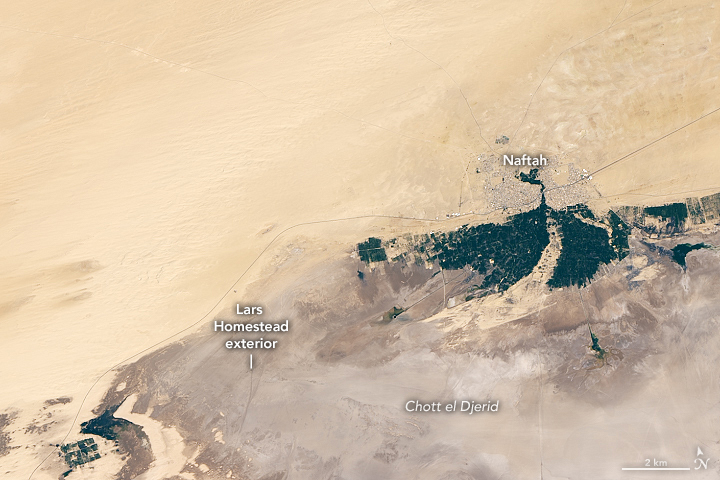 On May 2, 2020, the Operational Land Imager (OLI) on Landsat 8 acquired these images of Chott el Djerid. While the lake is often dry, OLI and several other satellite sensors have observed several instances in the past few decades when heavy rains caused water to pool up and cause a layer of minerals (white in the image) to form as the water evaporated.

Another iconic setting visible in Landsat imagery is the rugged terrain of Sidi Bouhlel in Dghoumès National Park. The canyon served as the backdrop for so many scenes that it is sometimes called “Star Wars Canyon,” though parts of Indiana Jones and The English Patient were also filmed there. The region known in the Star Wars universe as the Jundland Wastes is where R2-D2 was kidnapped by scavengers as he rolled through a ravine and where Tusken Raiders attacked Luke Skywalker. In the real world, the canyon offers striking views of colorful sandstone and shale, a waterfall, and even ancient crocodile fossils. 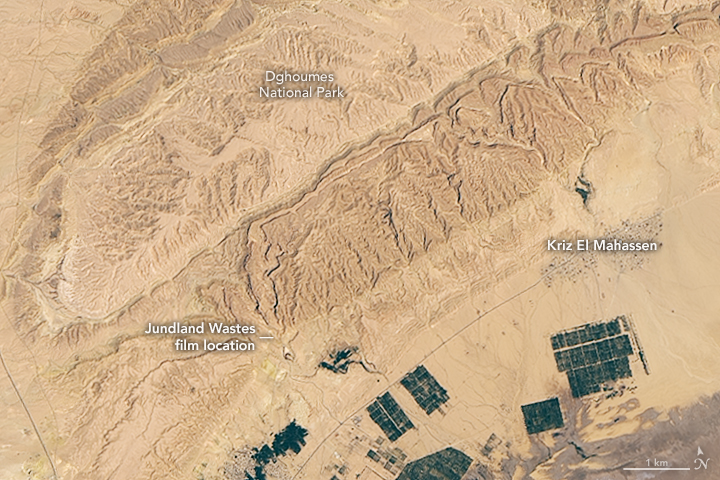