The island also attracted corporations interested in mining minerals from the sand. Although it contributed millions of dollars to the island’s economy, sand mining has been a controversial enterprise because of its impact on wildlife habitats and Aboriginal archeological sites. Nearly all of the vegetation gets destroyed at mining sites and the recovery is slow.

But after nearly seven decades on the island, sand mining activities have stopped in recent years due to expired mining leases. In 2011, the Australian government passed the North Stradbroke Island Protection and Sustainability Act, which placed deadlines to phase out activity at the island’s three mines. In December 2019, the Enterprise mine, the last one still operating on the island, was scheduled to stop operations. 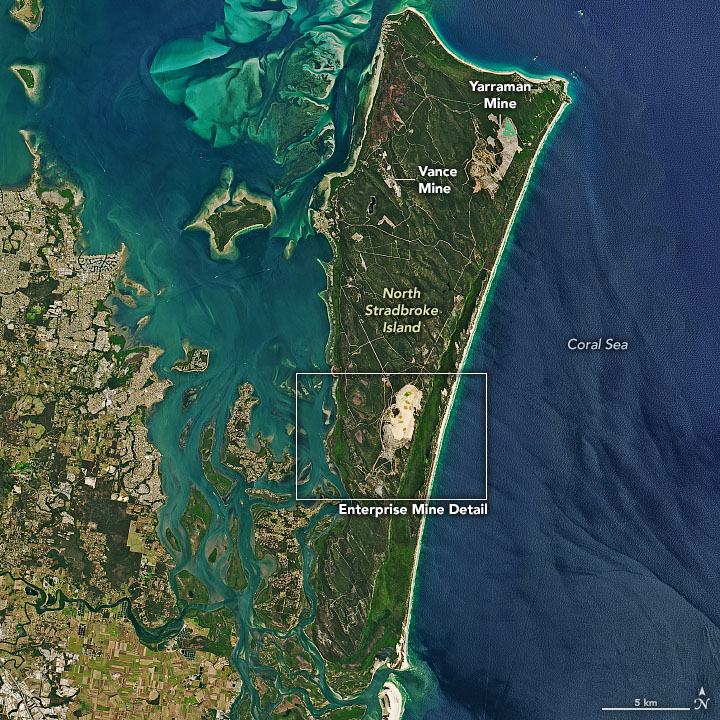 The image above shows a wider view of all three mines on November 3, 2019, as observed by Landsat 8. Miners at Enterprise and Yarraman mainly extracted mineral sands such as zircon, rutile, and ilmenite; the minerals are used in paints, plastics, metals, and cosmetics. Miners at Vance extracted silica from the sand for glass production. In 2010, mining leases covered around 45 percent of the island.

The Enterprise and Yarraman mines commonly used an extraction method called dredge mining. In these regions, workers dug large holes and then flooded the area. Dredges collected the sandy slurry from the bottoms of the pools. The mixtures were then sent to a plant to extract the heavy minerals. Dredge mining has a larger environmental footprint than dry mining, which is often used for glass-related sand extraction. The image below shows a closer view of dredge mining operations at Enterprise on November 3, 2019. 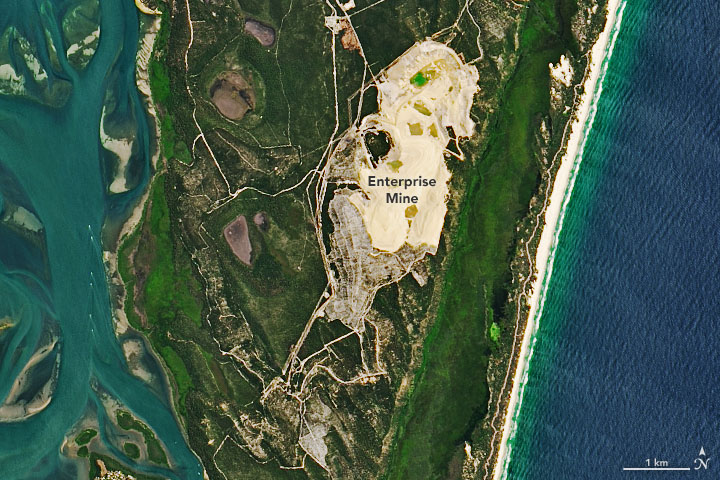 The Queensland government and native Quandamooka landholders are currently rehabilitating the former mining sites. They hope to transition the island’s economy to more sustainable, nature-based activities and to increase the already bustling tourism industry. Naree Budjong Djara National Park currently covers around 50 percent of North Stradbroke Island—known as “Minjerribah” (“place of many mosquitoes”) to the Quandamooka people. The government plans to convert 80 percent of the island into that protected parkland by 2026.