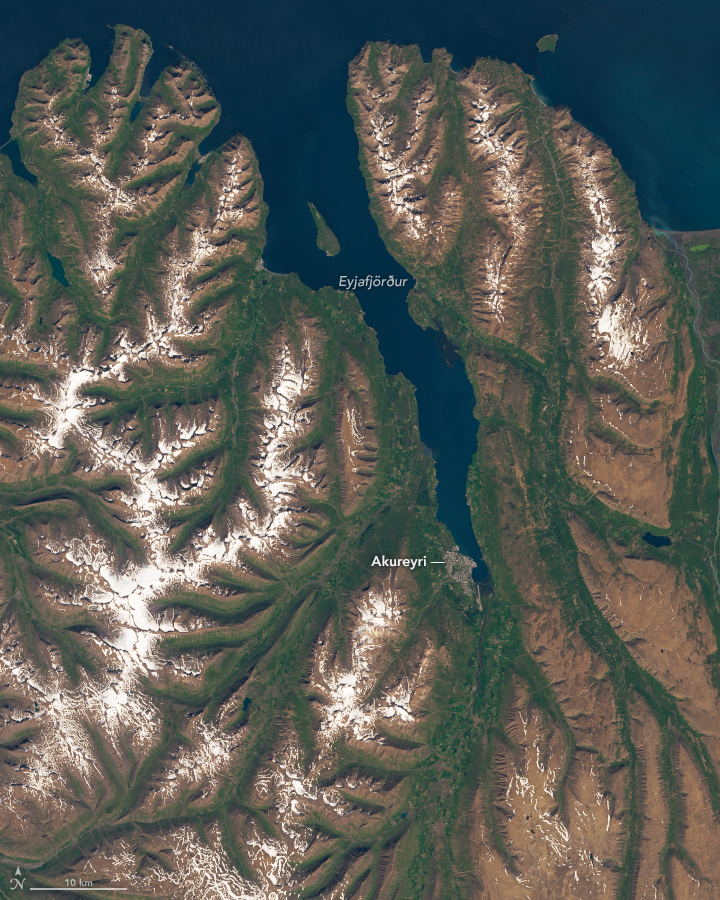 Most of the 109 fjords of Iceland are clustered in a small area in the east or around the large peninsula in the northwestern part of the island. There are just a handful of fjords along the northern coast. Among them is Eyjafjörður, Iceland’s longest fjord.

Eyjafjörður spans more than 60 kilometers (40 miles) from its mouth to Akureyri, a city known as Iceland’s “northern capital.” The Operational Land Imager (OLI) on Landsat 8 acquired this image of the fjord on July 26, 2017.

Eyjafjörður has become a prime destination for whales, scientists, and tourists. Humpback, bottlenose, blue, and minke whales frequent the sheltered, nutrient-rich waters to feed on plankton. Scientists are drawn to study the unusual hydrothermal vents found in its shallow waters. And with an ice-free port and a surprisingly mild climate, Akureyri is typically visited by more than 100 cruise ships per year.

The fjord was created by many thousands of years of glacial activity. When this part of Iceland was cooler and icier, glaciers carved the long, narrow valley by grinding against the land surface as they slid toward the sea. Over time, rising sea levels filled the valley to create the fjord.

South of the fjord, pastures and farms are concentrated in the valley. It is one of the few areas in the rugged, rocky terrain of Northern Iceland with a significant amount of farmland.