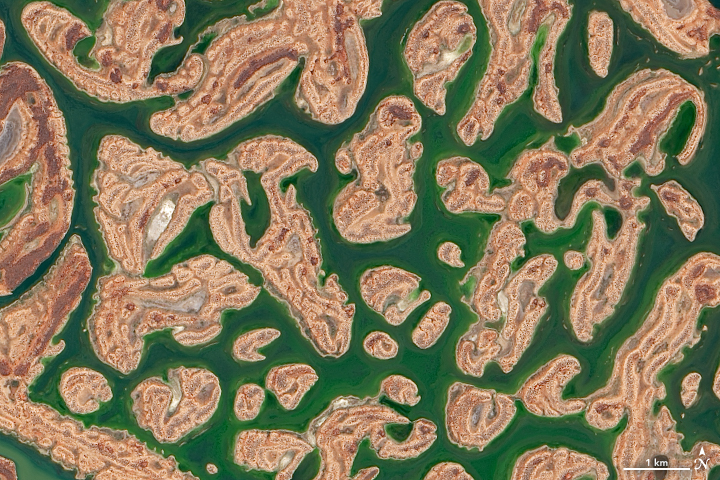 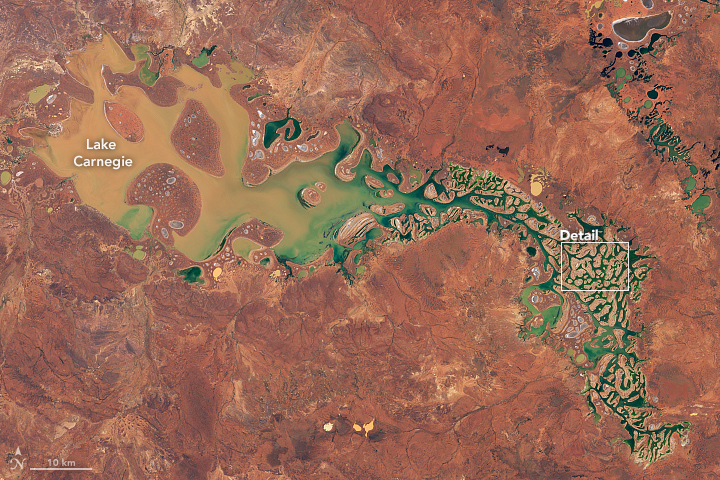 Editor’s note: This Image of the Day is the answer to our April 2020 puzzler.

Some of the largest natural lakes in Australia are waterless throughout much of the year. Scattered across the country, these ephemeral lakes usually only fill after heavy seasonal rains or passing tropical cyclones drench the landscape. After a tropical storm in early 2020, water levels rose in one such lake.

Located in the Shire of Wiluna in Western Australia, Lake Carnegie is one the country’s largest lakes. When full, it is covers about 5,700 square kilometers (2,200 square miles). In dry years, the lake is mostly a muddy marsh. The images on this page show the lake on March 26, 2020, when it was still partially filled. The images were acquired by the Operational Land Imager (OLI) on Landsat 8.

While the 2019-2020 austral summer brought record high temperatures to Western Australia, it was also an unusually wet season. In early 2020, numerous tropical storms dumped significant amounts of rain across the region. Overall, rainfall amounts in Western Australia were 9 percent above the average summer.

Tropical cyclone Blake, in particular, set a number of daily rainfall records in January. Ground stations in Carnegie recorded 27.5 centimeters (around 11 inches) of rain in 24 hours, which was the area’s wettest 24-hour period since records began in 1942. While only a dozen or so people are reported to live around Lake Carnegie, the water can provide important habitat and breeding areas for great flocks of birds.