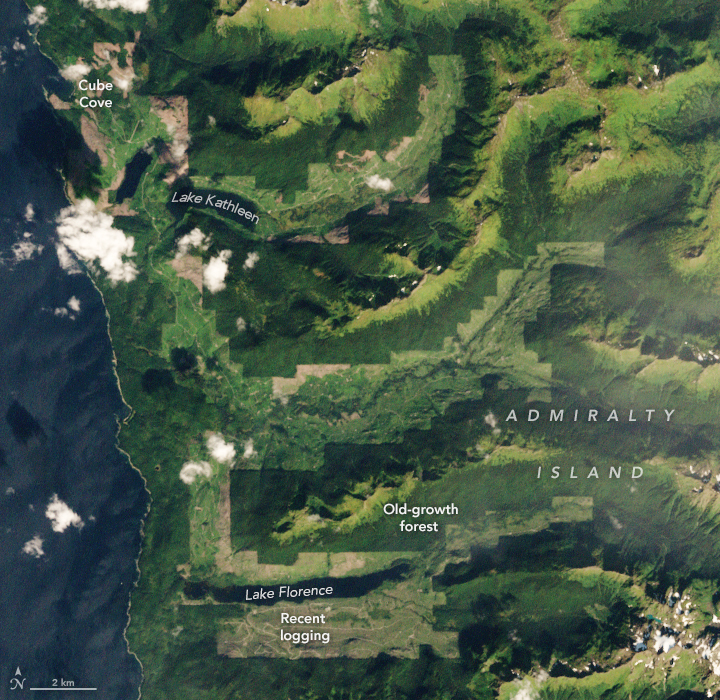 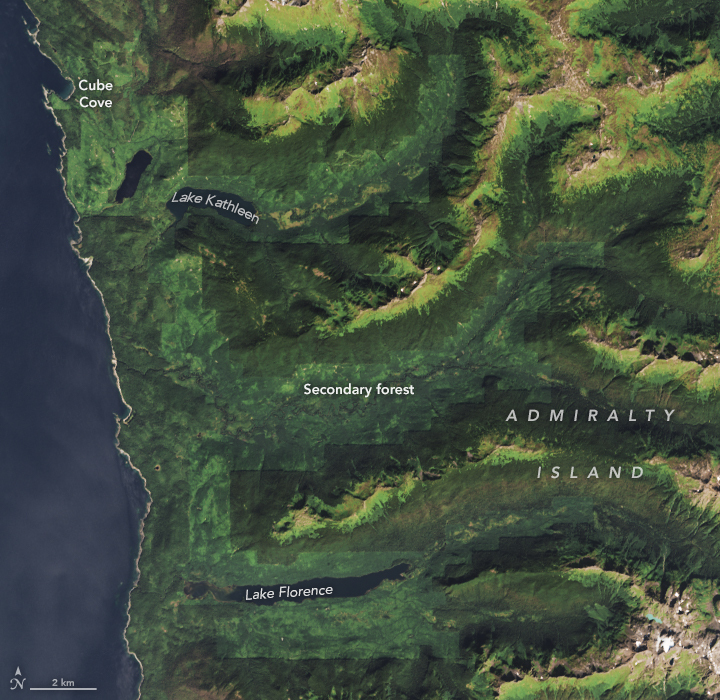 Admiralty Island: “Fortress of the Bears”

In the language of the Tlingit people, Admiralty Island’s original name—Kootznoowoo—means “Fortress of the Bears.” It is a fitting name for a place with one of the highest densities of brown bears in North America. The bears—roughly 1,500 in an area the size of Delaware—thrive in the island’s dense spruce and hemlock forests and alpine meadows.

However, years of logging and ecosystem change near a cove in the northwestern part of the otherwise pristine island have left their mark. During a period of logging in the 1980s and 1990s, old-growth forests in certain stream and lake valleys were stripped bare. The changes near Cube Cove altered the island’s coastal temperate rainforest ecosystem, requiring that bears—and several other types of wildlife—make adjustments. In addition to having some of the world’s most productive bald eagle habitat, the forests and waterways around Cube Cove support deer, otters, martens, minks, and many types of other birds and fish.

The Enhanced Thematic Mapper Plus (ETM+) on Landsat 7 captured the image above, which highlights the extent of the logging in 2002, three years after large-scale clearcutting had stopped. Two decades later, Landsat 8 imagery tells a story of regrowth. The tribal group that owned the logged land began selling parcels of land back to the U.S. Forest Service (USFS) in 2016. By the time the deal had been completed in January 2020, the forest service had acquired 23,000 acres (93 square kilometers) of land, all of which are reverting to natural forest again and being added to Admiralty Island National Monument and the Kotznoowoo Wilderness, which are units of Tongass National Forest.

Year by year, the clear-cut areas around Lake Kathleen, Lake Florence, and several stream drainages have grown thicker and greener. But even as these regrowing forests start to fill in where old-growth forests once stood, people who know Admiralty Island well say the newer forests are still of a very different character than those they are replacing. “This area will slowly return to supporting wildlife, but it will take at least 200 years—maybe 300—before these newer forests can provide the high-quality habitat conditions of old-growth forests,” said KJ Metcalf, a retired U.S. Forest Service ranger for the Tongass National Forest and president of Friends of Admiralty Island. “But at least the forests have taken their first steps toward recovery.”

One of the key differences between old-growth forests on Admiralty Island and the secondary forests is the size and age distribution of trees. After clear-cutting, secondary forests grow back with closely packed trees that are all roughly the same size and age. At certain stages of regrowth, the young trees become so tightly packed that they can block wildlife from passing, a problem for bears and deer that move between alpine and coastal ranges depending on the season.

At other stages, the leaf canopy becomes so dense that it blocks most light, preventing moss, lichens, shrubs, and other understory vegetation—forage for many types of wildlife — from growing on the forest floor. In future decades, gaps will open up in the forest canopy as winds, disease, and insects cause some trees to die and allow for a better distribution of tree sizes and ages and more understory.

“I can not emphasize how productive these drainages were and the key role they once played in connecting the high country to the coastline.” said Metcalf. “For this part of Admiralty, that value has unraveled and remains broken, despite the regrowth. In time, fortunately, that will heal.”