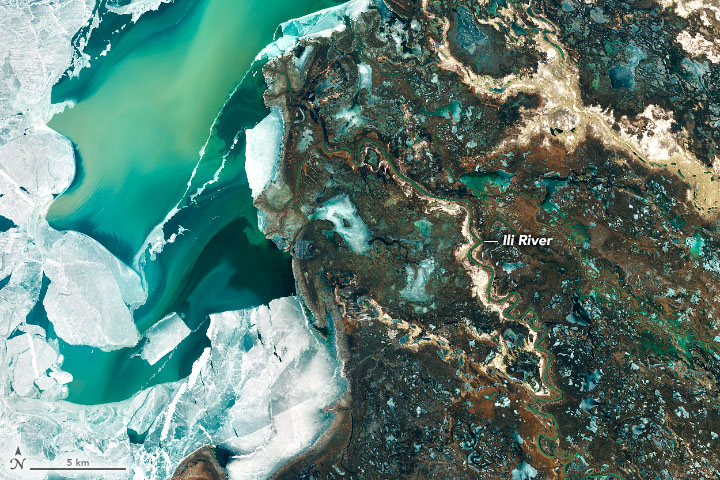 A Delta Oasis in Southeastern Kazakhstan

Seen from space, the Ili River Delta contrasts sharply with the beige deserts of southeastern Kazakhstan.

When the Operational Land Imager (OLI) on Landsat 8 acquired this natural-color image on March 7, 2020, the delta was just starting to shake off the chill of winter. While many of the delta’s lakes and ponds were still frozen, the ice on Lake Balkhash was breaking up, revealing swirls of sediment and the shallow, sandy bed of the western part of the lake. Over the deeper eastern part of the lake, ice persisted until the last week of March. 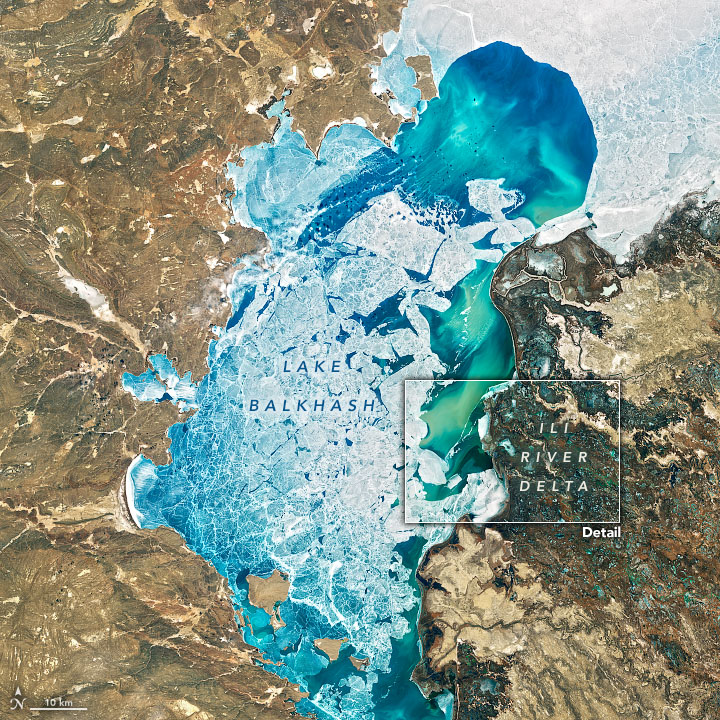 Most of the water in Lake Balkhash comes from the Ili River, which pours in through the southeastern shore. The expansive delta and estuary—still dark brown in this image thanks to Central Asia’s harsh winters—is nevertheless an oasis for life year round. Hundreds of plant and animal species make a home here, including dozens that are threatened or endangered.

Wild boars, gazelles, marbled polecats, and several other mammals roam the reed beds, meadows, and occasional forests. Dozens of fish species live or spawn in the lake and in the delta’s mosaic of streams and ponds, including ship sturgeon and wels catfish. Several species of jumping rodents—such as jerboas, voles, and gerbils—scurry amidst the underbrush. Millions of birds, including massive Dalmatian pelicans and endangered white-headed ducks, make use of these wetlands.

In 2012, Kazakhstan declared the delta a wetland of international importance under the Ramsar Convention, a treaty that encourages the conservation and sustainable use of wetlands throughout the world. But with significant amounts of the Ili River’s water being diverted for dams and irrigation, some observers say that the delta could become vulnerable to the same sort of environmental problems faced by wetlands near the Aral Sea, which has shrunk rapidly in recent decades.