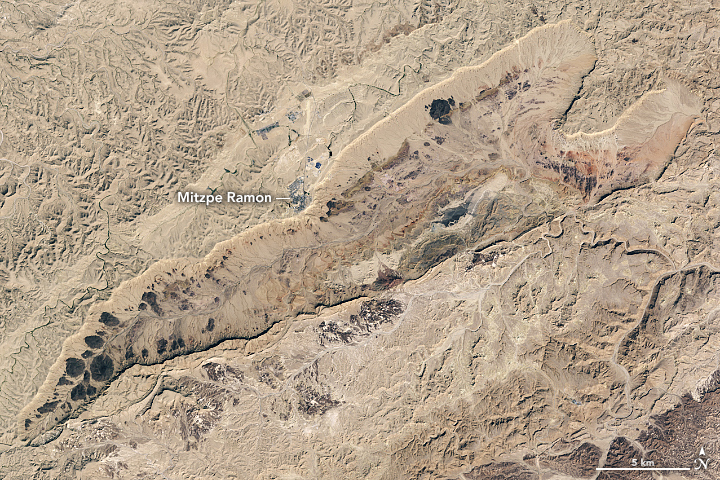 If you fly over Israel’s Negev Desert, you may notice a heart-shaped basin amidst the rocky terrain. The crater, or makhtesh, is about 500 meters (1,600 feet) deep and is one of the country’s most notable geological formations. Scientists initially thought this odd-shaped depression was the result of a meteor colliding with the desert floor. However, the origins of the chasm are earthly.

More than 200 million years ago, the Negev Desert was located under the primordial Tethys Sea. As the sea slowly receded north, it exposed a small hill that was previously submerged. As the hill became exposed to the atmosphere, water and wind flattened its top. Rivers carved out the inside of the hill—which was comprised of soft limestone—to create a crater. The interior of the crater eroded much faster than the surrounding walls—creating the valley we see today. Over the years, rivers have further eroded the rock to produce the elongated heart-shaped feature known as the Ramon Crater.

The Operational Land Imager (OLI) on Landsat 8 captured this image of Ramon Crater (Makhtesh Ramon) on February 14, 2020. The bowl, which measures about 40 kilometers (25 miles) long and 2 to 19 kilometers (1 to 12 miles) wide, is the world’s largest erosion crater. (If you are thinking that the crater actually looks more like a plateau than a canyon or basin, you might be experiencing relief inversion.)

Ramon Crater resembles a landscape from the fictional Star Wars planet of Tatooine. It includes sporadic red and yellow clay hills and is surrounded by mountains. The north section of the crater contains a black hill, which was once an active volcano that is now covered with basalt. The closest town is Mitzpe Ramon (population 5,000) on the edge of the northern cliffs overlooking the crater. Because of the crater’s vastness and remote location, the area was chosen as a site to reintroduce several animals on the brink of extinction, such as the onager and Arabian oryx.

Ramon Crater also contains a memorial dedicated to Ilan Ramon, the Israeli astronaut who died along with six other crew members in the Space Shuttle Columbia accident in Feburary 2003. Born Ilan Wolferman, he changed his surname to Ramon as the region was one of his favorite places. The memorial is located at Mount Ramon, the highest peak in the area.