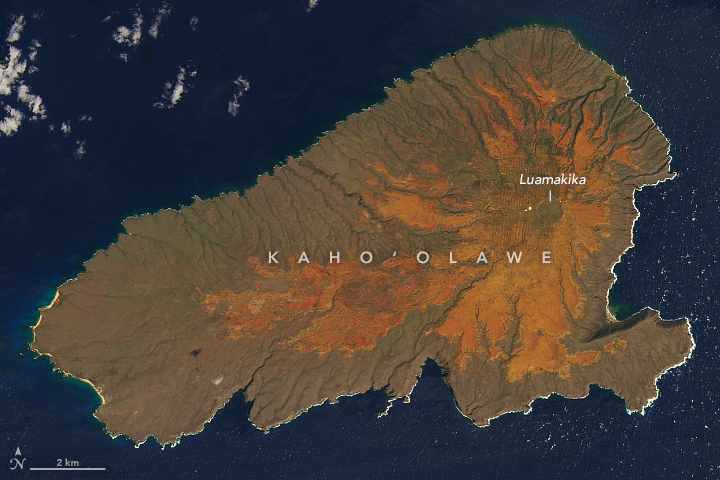 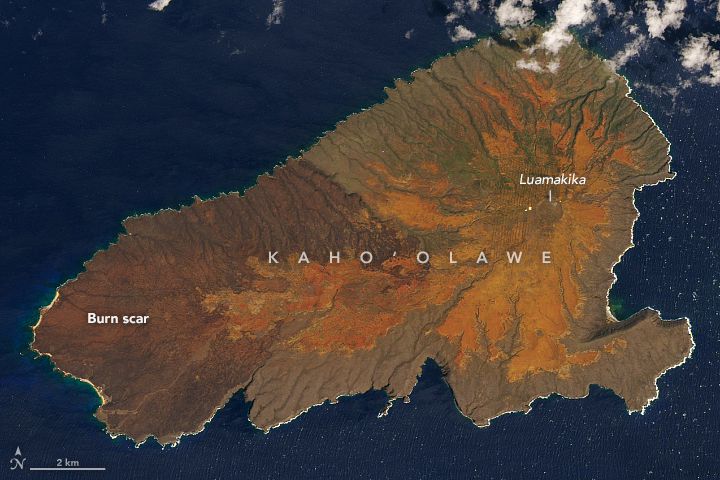 The island has been scarred by volcanic eruptions, livestock grazing, penal colonies, and bombs. In late February 2020, it was scarred by fire. Yet there is hope for healing on the small Hawaiian island of Kaho’olawe.

The smallest of Hawaii’s eight main islands, Kaho’olawe sits about 7 miles (11 kilometers) southwest of Maui. The island is relatively dry for the tropics (no more than 26 inches/65 centimeters of rainfall annually) because of its location in the rain shadow of Haleakala volcano. While there are some coastal cliffs on the southern and eastern ends of Kaho’olawe, the island cuts a relatively low profile, mostly below 500 feet (150 meters) in elevation. Luamakika crater on Pu’u Moaulanui is the highest point, rising 1,477 feet (450 meters) above sea level.

On February 22, 2020, wildfire broke out along the western edge of the island. Over the course of a week, more than 9,000 acres (about one-third of the island) of scrubby, grassy land were consumed by the blaze, which was eventually extinguished by rain and firefighters from Maui. The Operational Land Imager (OLI) on Landsat 8 acquired these natural-color images of Kaho’olawe before and after the fire, on February 20 and March 7, 2020. Note the dark brown burn scar along the western end. To the east, much of the island has an orange-red tone due to bare hardpan dirt—a result of erosion and dry weather.

The fire is just the latest trial for nature on the island. In the late 1700s, goats were introduced to Kaho’olawe, and they chewed up much of the landscape. In the mid-19th century, the Kingdom of Hawaii used it as a penal colony. Cattle and sheep ranchers came next. Then, after the attack on Pearl Harbor in 1941, the island was taken over by the U.S. Navy for military training and bombing practice that lasted nearly 50 years.

Since the early 1990s, when the island was returned to the state of Hawaii, the Protect Kaho’olawe Ohana and the Kaho’olawe Island Reserve Commission have worked to restore the landscape. More than 9 million pounds of unexploded ordnance and other military debris has been removed, though about a quarter of the island still remains uncleared. Some native Hawaiians told news media that the recent fires may prove to be a blessing because they are thought to be a “cleansing force.” Indeed, some unexploded ordnance may have been uncovered and a lot of invasive grasses and vegetation burned. The preservation groups hope to re-plant the area with native plant species and eventually establish a seabird colony.

Kaho’olawe has more than 500 archaeological sites dating back to the arrival of early Hawaiians around 400 AD. It is home to some of the state’s oldest and largest heiau (Hawaiian temples). In 1981, the entire island was listed on the U.S. National Register of Historic Places.