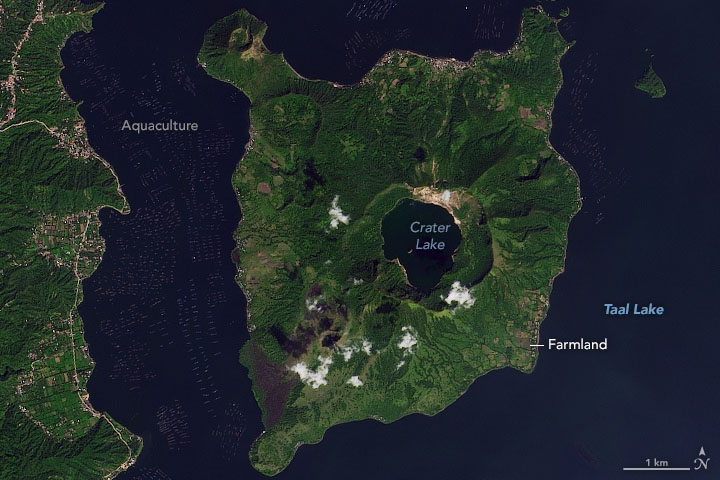 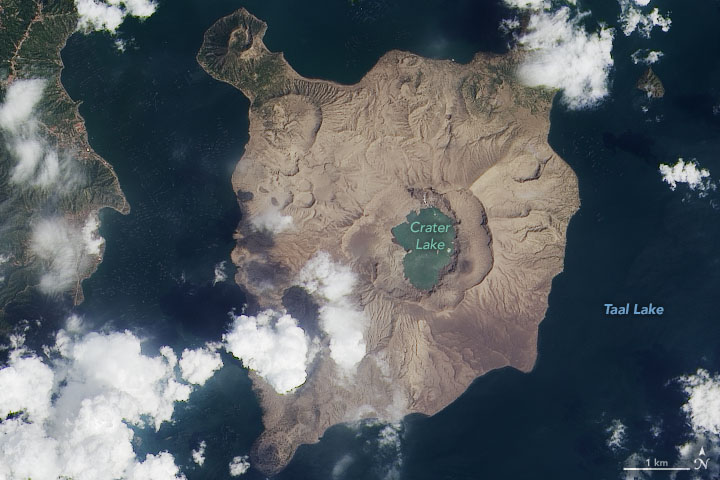 An Ash-Damaged Island in the Philippines

On January 12, 2020, the Taal Volcano in the Philippines awoke from 43 years of quiet and began to spew gases, ash, and lava into the air. In the days and weeks that followed, the eruption dropped a layer of unusually wet, heavy ash on the surrounding landscape, withering vegetation and turning the lush fields and forests of Volcano Island a ghostly gray.

Two months later, the ash-damaged landscape still looks more like the Moon than the tropics. On March 11, 2020, the Operational Land Imager (OLI) on Landsat 8 acquired an image of Taal that underscores the consequences of the ashfall. For comparison, the other image shows the same area on December 6, 2019.

Aside from a few green promontories on the north side of the island, ash has altered much of the landscape, including several villages along the coasts. “Most of the ash has likely washed away by now, but signs of it will persist for millennia in the rock record,” explained Erik Klemetti, a volcanologist at Denison University. “Most of the ash that fell within the caldera is in the process of getting concentrated into gullies and streams or deposited into the lake.”

Volcanic ash is nothing like the soft fluffy material that forms when wood, leaves, or paper burn. Rather, it is made up of small jagged pieces of rock and glass that are hard, abrasive, mildly corrosive, and do not dissolve in water. Thick blankets of volcanic ash can have big consequences for plants, animals, and people. As shown in the Landsat images, most of the vegetation was killed or stripped of leaves. In Taal’s case, the ash was particularly problematic because it grew wet enough to achieve the texture of mud, before drying and hardening into something like cement.

Coffee, rice, corn, cacao, and banana crops were damaged, according to news reports. In one estimate, damages to plants and animals totaled 577 million Philippine pesos, or $11 million. Despite the widespread effects, plants will eventually recover or re-colonize the island—and the layer of new ash will help keep the soil fertile.

The damage extended beyond plant life. Dozens of people perished during the eruption. Large numbers of livestock and pets were also left behind when tens of thousands of people evacuated. Ash even affected the fish—mainly tilapia and milkfish—being raised in thousands of aquaculture pens in Taal Lake. According to the Taal Lake Aquaculture Alliance, Inc., about 30 percent of the fish cages in the lake were destroyed during the eruption. To keep the remaining fish alive, farmers appealed to authorities to allow them to feed and harvest the fish despite lockdowns that prevent people from getting near the still-active volcano.

Water has returned to Taal’s main crater lake, which mostly evaporated or drained during the eruption.