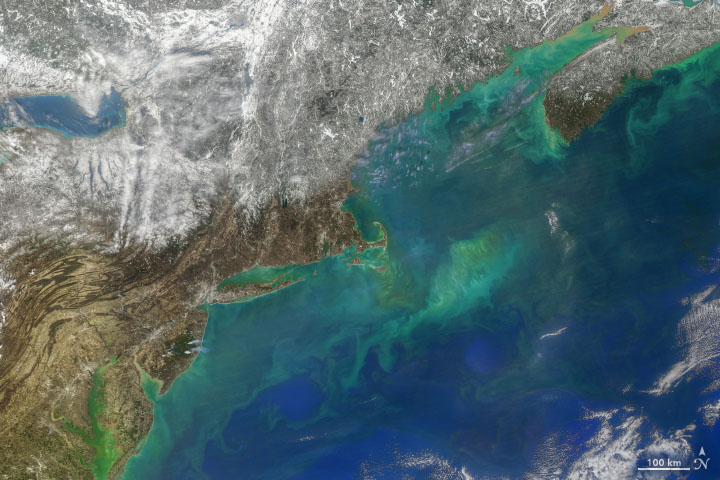 Hints of Spring in the Atlantic

Meteorological spring has sprung in the Northern Hemisphere, and that means the increasing hours of sunlight are slowly waking up primary producers in the sea. Like plants on the land, phytoplankton are floating, plant-like organisms that need sunlight and nutrients to thrive. Springtime brings both.

The image above was composed from data collected on February 23, 2020, by the Moderate Resolution Imaging Spectroradiometer (MODIS) on NASA’s Aqua satellite. It captures a portion of the North Atlantic Ocean from the Delmarva Peninsula to Nova Scotia.

Aqua MODIS observes Earth in 36 different spectral bands. Norman Kuring of NASA’s Ocean Biology group makes full use of that spectrum to make the blooms more visible. The detailed swirls in the chlorophyll-rich water are real; Kuring simply separates and enhances certain spectral bands to tease out the details. (You can see actual chlorophyll-a measurements from Aqua on February 23 and on March 8.)

In the image above, the lighter green and milky blue areas offshore reveal the locations of blooming phytoplankton, suspended sediments, and shallow shoals and banks—such as the underwater plateau to the east of Cape Cod known Georges Bank. Note also how the phytoplankton and sediments wrap into swirls and rings in some places, a signature of eddies and warm core rings that spin off from the Gulf Stream.

The image below—a closeup of Cape Cod, Martha’s Vineyard, Nantucket, and the shoals between them—was acquired by the Operational Land Imager (OLI) on the Landsat 8 satellite on February 24, 2020. 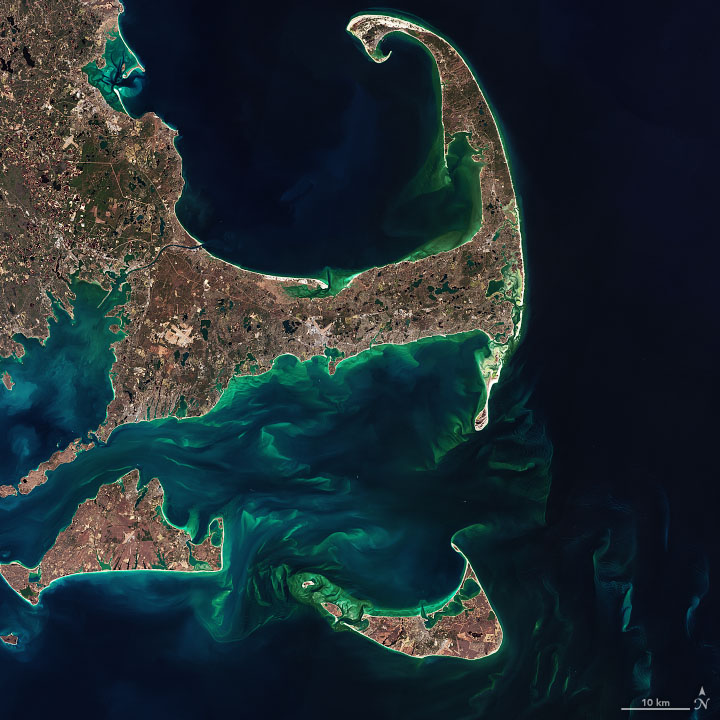 Spring is a time of great change, turbulence, and productivity in the North Atlantic Ocean. As snow and ice melt and spring rains fall, rivers surge with water and carry nutrients into the coastal ocean. Strong and variable seasonal winds also promote upwelling of nutrients from the deep. Combined with more sunlight and gradually warming waters, these nutrients make the Northwest Atlantic fertile—first with phytoplankton, and then with fish. The Gulf of Maine and Georges Bank have historically been among the most productive fishing grounds on the planet.

On a global scale, phytoplankton are responsible for nearly half of Earth’s primary production, turning carbon dioxide, sunlight, and nutrients into the food that fuels almost everything in the sea, from finfish to shellfish and from zooplankton to whales. Phytoplankton also influence the chemistry and climate of the planet. They produce about half of the oxygen in Earth’s atmosphere and they also take carbon out of it, locking it up for a time in their cells, in the animals that consume them, and in pellets of waste that drop to the seafloor.