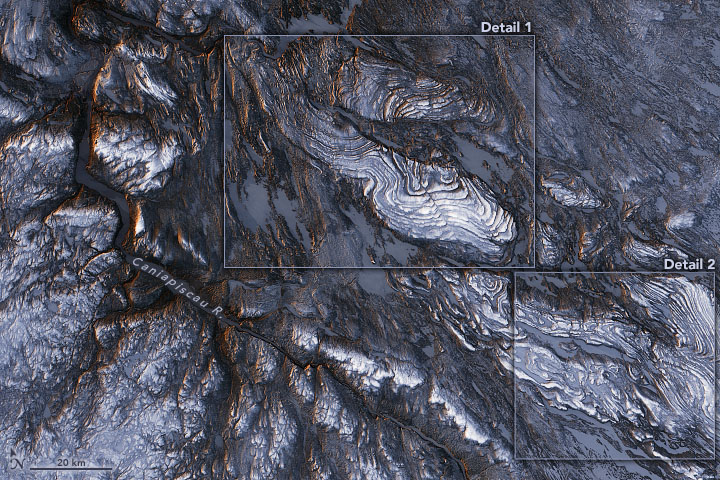 During the last Ice Age, advancing and retreating glaciers in northeastern Canada scraped the surface clean of debris to help make visible some stunning fold patterns in the basaltic rock. Those folds are still visible today and appear in these images, which show part of a geologic belt called the New Quebec Orogen (also known as the Labrador Trough).

The orogen stretches southeast from Ungava Bay through Quebec and Labrador, with striking geologic features throughout. These images highlight the deformation in Earth’s crust just east of the Caniapiscau River. The images were acquired on February 13, 2020, by the Operational Land Imager (OLI) on Landsat 8, and were overlaid on a digital elevation model from the Shuttle Radar Topography Mission (SRTM) to give a sense of the topography. Wintertime snow and ice blanket some of the landscape. 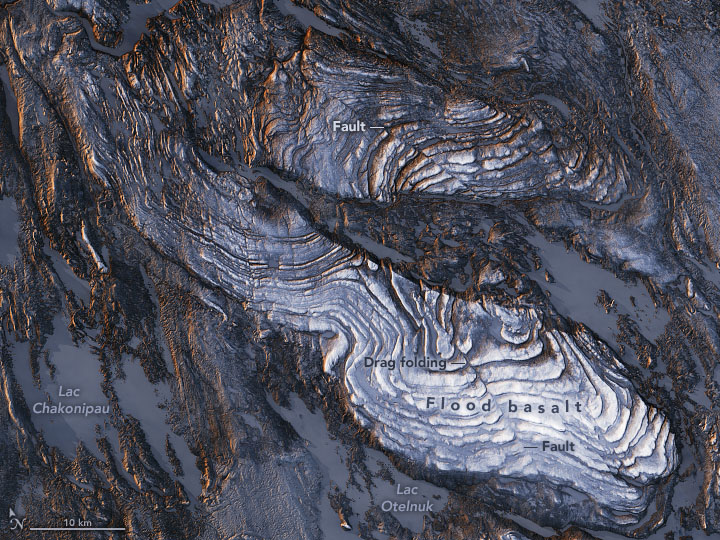 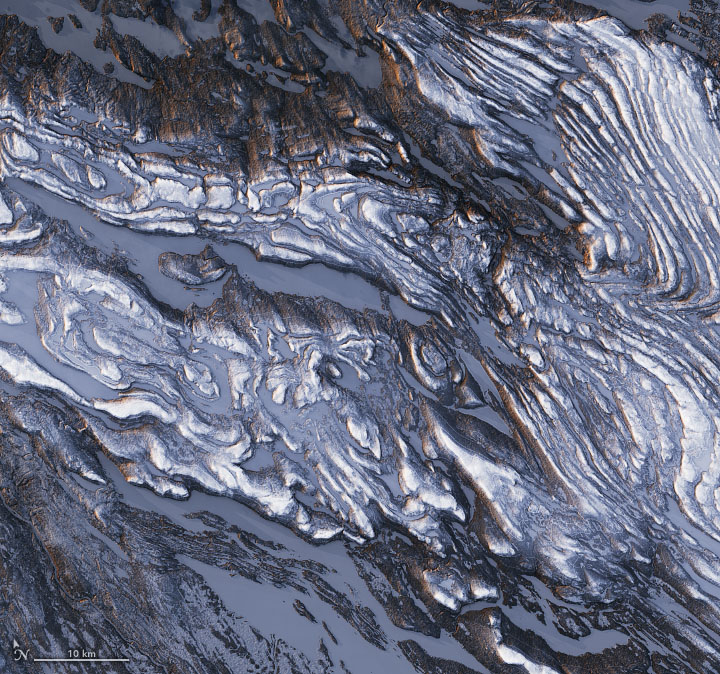 “The patterns shown in the images have quite a long history—from rifting to cooling to folding—during continental collision,” said Deanne van Rooyen, a geologist at Cape Breton University who has studied the region. About 2.17 billion years ago, she explained, molten rock erupted from rifts in Earth’s crust and flooded the landscape with basalt. Successive flows of this so-called “flood basalt” were laid down in nearly horizonal layers, producing the step-like pattern visible in these images. When viewed up close, most flows show spectacular columnar jointing structures.

David Corrigan of the Geological Survey of Canada notes that the cliff face of each flow (or series of flows) represents a step, each standing about 50 to 70 meters (160 to 230 feet) tall. Geologists often refer to geometry like this as “traps”—the Dutch word for “step”—which can be found around the planet in places like the Deccan Traps in India or the Siberian Traps in Russia. “I affectionally name our example the ‘Labrador Traps,’” said Corrigan, who previously led a geological mapping project in the general area.

The gentle folding of the traps came later with the collisions of cratons—ancient, stable parts of Earth’s crust—with a microcontinent known as the “Core Zone” sandwiched in between, Van Rooyen explained. The Core Zone collided first with the North Atlantic Craton around 1.87 billion years ago, and then collided (with the North Atlantic Craton attached) with the Superior Craton between about 1.80 billion years ago. This more recent collision initially occurred head on, but became oblique as the North Atlantic Craton rotated. The rotation caused Core Zone rocks to move down the side of the Superior Craton, and the dragging of layered rock alongside the solid craton gave rise to the folded patterns.

“These types of folds are not rare,” Corrigan said. “But in this case, they are made spectacular by the nature of the rocks they fold. With a bit of erosion, they become stair-shaped. If they are folded a bit, the stairs, or steps, stand out.”

But the story does not end there. Sometime after the folds formed, the rock became brittle and the continued motion began to produce linear breaks. The offsets on either side of the cracks indicate movement along the faults. In some places you can see where layers were dragged along the plane of the fault, with the friction causing the folds to curve back toward the fault—an effect called “drag folding.”

Satellite images and field work have given scientists a good sense of the region’s geology, but there are still plenty of questions to be investigated. “The basic geology is well-mapped,” Van Rooyen said, “but there has been a lot of new work in the area in the past decade by the Geological Survey of Canada as part of their Geomapping for Energy and Minerals (GEM) program, the Newfoundland and Labrador Geological Survey, the Quebec Ministry of Energy and Natural Resources, and many university geologists like me.”

For example, the flood basalts provide a hint of what the chemical composition of the underlying mantle may have been 2.17 billion years ago, providing key information on Earth’s evolution. Scientists also want to know more about the timing of the evolution of the New Quebec Orogen, such as when the different phases of collision happened. There are also questions about the pressures and temperatures when the rocks formed, as well as questions about the economic potential for the rocks to host gold, platinum, or other important metals.