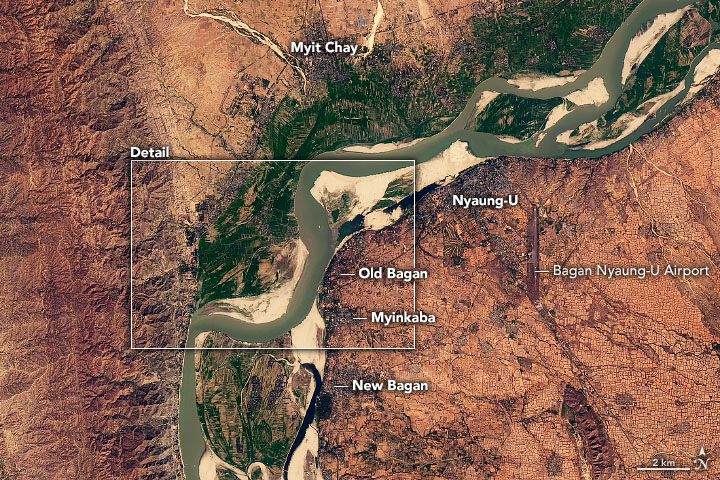 The Land of Ten Thousand Temples 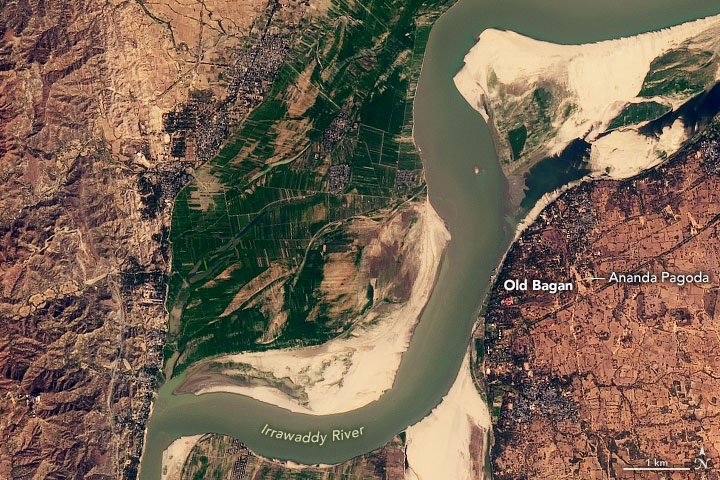 When explorer Marco Polo passed through modern-day Myanmar (Burma) about 700 years ago, one city caught his attention: Bagan. Known as Pagan at the time, it was the capital of the Pagan Kingdom. This first Burmese empire lasted from the 9th to 13th centuries and had heavy Buddhist influences. Around 10,000 temples and religious structures were built in the capital in that era, and Polo was captivated by the numerous spires that dotted the landscape, saying the towers made the city “one of the finest sights in the world.”

In the middle of the 13th century, the Pagan Kingdom collapsed due to invasions by the Mongols. Many of the city’s temples and pagodas crumbled from the repeated attacks as well as natural disasters (mostly earthquakes). Yet more than 3,000 historic buildings and ruins still stand today, making Bagan one of the most impressive archeological sites in Asia.

The satellite images above show the Bagan Archeological Zone on February 6, 2020. The zone includes four main settlements: Old Bagan, New Bagan, Myinkaba, and Nyaung U. The ancient temples, pagodas, and other religious structures are mainly located within 26 square kilometers (16 square miles) of Old Bagan. The natural-color images were acquired by the Operational Land Imager (OLI) on the Landsat 8 satellite. The photograph below shows temples rising above the landscape in Old Bagan. 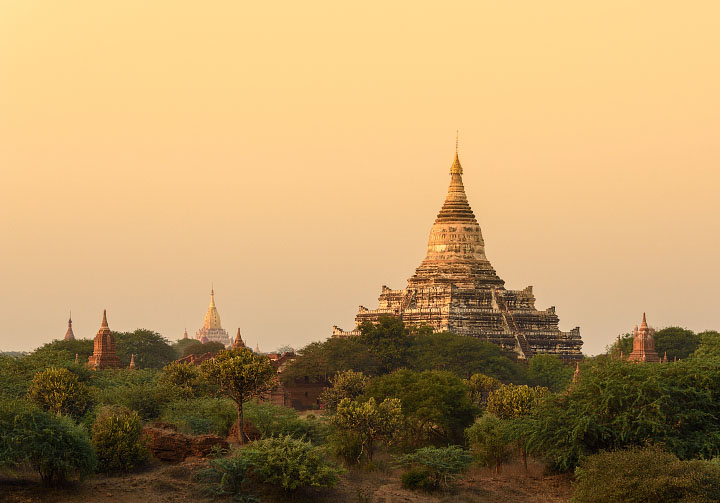 One of the most well-known and beautiful structures is the Ananda Pagoda, sometimes referred to as the “Westminster Abbey of Burma.” Built around 1105, it is one of the largest and best preserved of the Bagan temples. Ananda Pagoda is the centerpiece of one of the city’s biggest festivals, which celebrates the traditional lives of farmers with decorated bullock carts.

The Bagan Archeological Zone lies next to the Irrawaddy River (also known as the Ayeyarwady), the main waterway running through Myanmar (Burma). In the 13th century, the Pagan Kingdom gained control of the river and transportation on it, which helped them rule over lands farther away. Today, the river is an important avenue for commercial transportation and helps provide fertile area for farming. The river is also home to the endangered Irrawaddy dolphins.

Today more than 500,000 people visit Bagan each year. In 2019, the region was named a UNESCO World Heritage Site in order to promote preservation of the historic Buddhist temples and ruins.