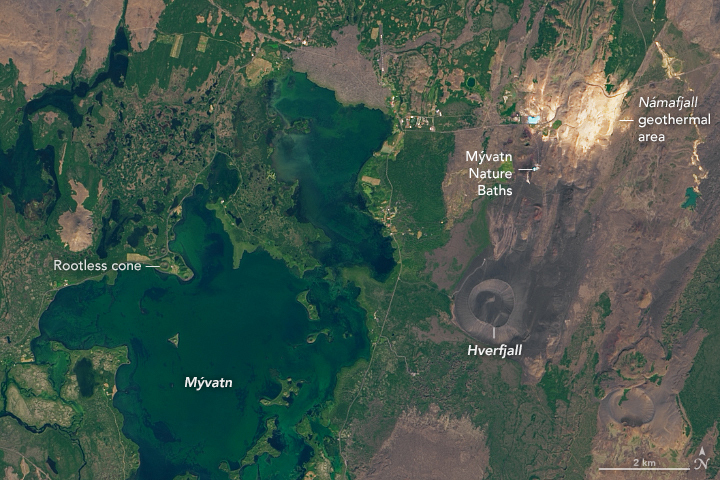 Water covers most of the Mid-Atlantic Ridge, the fiery seam of mountains where tectonic and volcanic forces forge new oceanic crust and push the Eurasian and North American plates apart. But there are a few places where you can explore the ridge and the rift valley at its crest on dry land.

Several small islands, including the Azores, Ascension Island, and Bouvet Island stand along the Mid-Atlantic Ridge and above the water line. But it is in Iceland where the longest stretches of the ridge and its rift can be explored.

This image, acquired by the Operational Land Imager (OLI) on Landsat 8 on July 26, 2017, shows a part of Iceland’s Northern Volcanic Zone near Mývatn. The lake is known both as a breeding ground for enormous numbers of tiny insects called midges, and for marimo, a rare algae that forms spherical balls. It also hosts several other types of bacteria and algae.

The Northern Volcanic Zone has a remarkable potpourri of volcanic features, some of which are visible here. One of the most prominent is Hverfjall, a tephra cone volcano that erupted explosively about 2,500 years ago. The crater has steep walls and a distinctive circular crater partly because the volcano erupted near a shallow lake. (Explosive eruptions without much water generally form tuff rings, similar features that have lower, broader rims.)

West of Hverfjall, the edges of Mývatn are dotted with smaller, circular features known as rootless cones. Though they look like craters, rootless cones have no connection to magma chambers underground. Instead, they formed when lava flows crossed wet land surfaces, like swamps or ponds, and caused powerful steam explosions.

North of Hverfjall lies the Námafjall geothermal area, an otherworldly place pockmarked with pools of bubbling mud (mudpots) and fumaroles hissing with noxious fumes. Little vegetation grows in this geothermal area because of the soil’s sustained exposure to volcanic gases and acidic waters. The photograph below shows a mudpot in Námafjall. 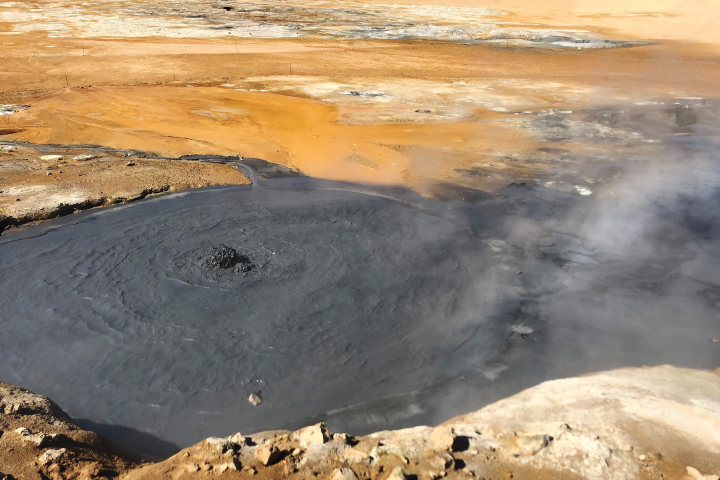 Some elements of the landscape are more welcoming. The bright blue waters of Myvatn Nature Baths stand out against a backdrop of dark basaltic lava flows. The popular tourist attraction draws waters from a borehole that is part of a nearby geothermal power plant.