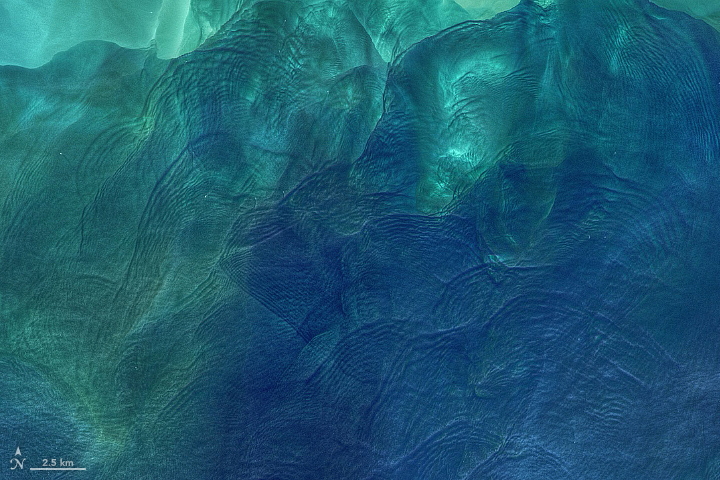 Making Waves in the Andaman Sea

This Image of the Day is the answer to the February 2020 puzzler.

“The ripplings are seen in calm weather approaching from a distance, and in the night their noise is heard a considerable time before they come near. They beat against the sides of a ship with great violence, and pass on, the spray sometimes coming on deck; and by carrying out oceanographic measurements from a ship, a small boat could not always resist the turbulence of these remarkable ripplings.”

So wrote oceanographer Matthew Fontaine Maury in a 19th Century description of a passage through the Andaman Sea, a section of the eastern Indian Ocean near Thailand and Burma (Myanmar). The strange phenomena he described as ripplings are now known to scientists as internal waves, or solitons. Oceanographers began studying them from ships in the 1960s, and the modern era of satellites has made it possible to see them on a grand scale.

Internal waves form because the ocean is layered. Deep water tends to be colder, denser, and saltier, while shallower water is often warmer, lighter, and fresher. The differences in density and salinity cause layers of the ocean to behave like different fluids. When tides, currents, gravity, and Earth’s rotation move these different water masses over seafloor formations (such as ridges or canyons), they create waves within the sea.

As internal waves move through the deep ocean, the lighter water above flows up and down the crests and troughs. Surface water bunches up over the troughs and stretches over the crests, creating alternating lines of calm water at the crests and rough water at the troughs. If you were on a boat, you would not necessarily see or feel internal waves because they are not always expressed at the surface in different wave heights—though clearly they were on Maury’s expedition. Mostly they show up as smoother and rougher water surfaces when viewed from above, with smooth water reflecting more light (appearing brighter) and rougher waters scattering more of it. 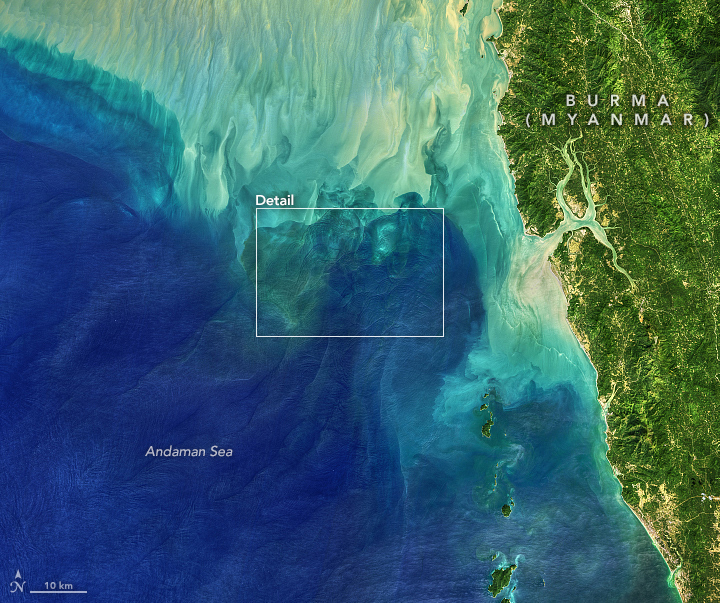 The Operational Land Imager (OLI) on Landsat 8 captured these images of the Andaman Sea on November 29, 2019. The reflection of the Sun on the ocean—sunglint—helps make the internal waves visible. The colors also have been slightly enhanced. The detailed swirls, fronts, and patterns are all quite real, but certain shades and tones in the data have been separated and filtered to make water features more visible. In some places, the lighter and darker tones reflect the depth of the water (darker is deeper); in other places close to the coast, there is likely suspended sediment from the muddy rivers in the region.

The Andaman Sea is known to sailors and scientists for its large internal waves, mostly because it has a diverse array of seafloor features. The Indian Ocean seafloor rises quickly from 3000 meters to 200 meters around the Andaman and Nicobar Islands, then drops again in the Andaman Sea. Within and around the sea, there are shallow ridges, reefs, and submarine banks. The area is also volcanically and tectonically active, so there are mountains on the seafloor. All of this rugged but out-of-sight topography alters the flow of water as it sloshes into and out of the basin.