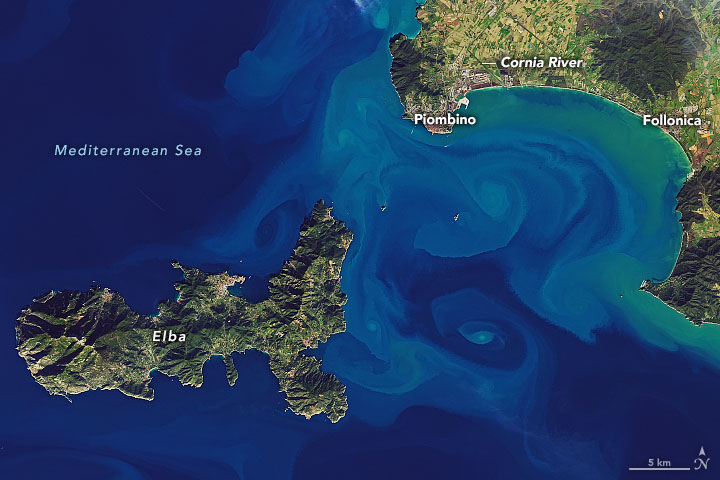 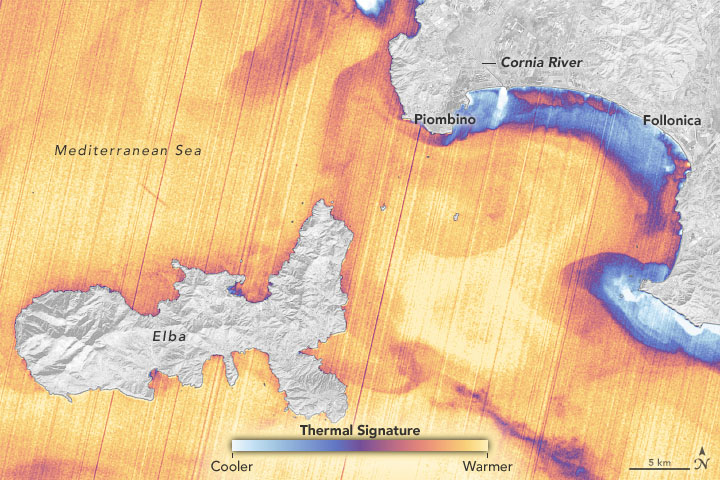 Eddy Extravaganza off the Italian Coast

Natural-color satellite images can capture art-like beauty when sediments trace water currents and eddies. Other kinds of data can make that art intersect with scientific understanding.

See, for example, the colorful details in the Mediterranean Sea (top image). When paired with a false-color observation of temperature, scientists can say more about the likely source of the color.

Aida Alvera-Azcárate, an ocean scientist at University of Liège, noticed colorful swirls off the coast of western Italy starting in late December 2019, as observed by the European Space Agency’s Sentinel-3 and Sentinel-2 satellites. The Operational Land Imager (OLI) on Landsat 8 acquired a similar scene on December 26 (top) showing colorful waters between the island of Elba and the Italian mainland.

The colors are primarily the result of suspended sediments that were carried by several rivers into the sea. (There might be some phytoplankton contributing as well). Water with more sediment appears green-brown, and water with less sediment is light blue.

When there is ample sediment in a body of water, it becomes easy to see otherwise invisible motions. Along the west coast of Italy, a strong current flows south. As the water is channeled between the island and mainland, the current encounters a shallow bay where it becomes unstable. It starts to swirl and produce numerous small-scale eddies.

Small features like these—less than 10 kilometers in diameter—are common in the oceans. According to Alvera-Azcárate, they can contribute to the total movement of water, nutrients, and heat around the planet. “But their precise role in this is very difficult to assess because they are not easy to model or measure,” she said.

Sediments and phytoplankton are not always present to act as tracers, and the features can be short-lived, quickly erased by stronger currents. Still, satellites are helping scientists compile the observations needed to better understand how the role of small-scale eddies compares to larger and more long-lived flows.

False-color images offer a different but equally compelling view. The Thermal Infrared Sensor (TIRS) on Landsat 8 acquired the second image at the same time that the natural-color image was acquired. TIRS measures the water’s relative warmth (yellows and oranges) and coolness (blues and white). The spatial resolution is lower, but you can still see some of the same swirling patterns.

Temperature is useful for revealing the origin of the waters. River water is cooler than the seawater here, so the white plume —where water from the Cornia River enters the bay—stands out. Interestingly, that same plume is not apparent in the natural-color image, which means the river might not be contributing much sediment. Alvera-Azcárate thinks the main sources of sediment come from larger rivers to the north along the Italian coast. She notes: “Having the two variables—color and temperature—helps to better understand what is going on.”