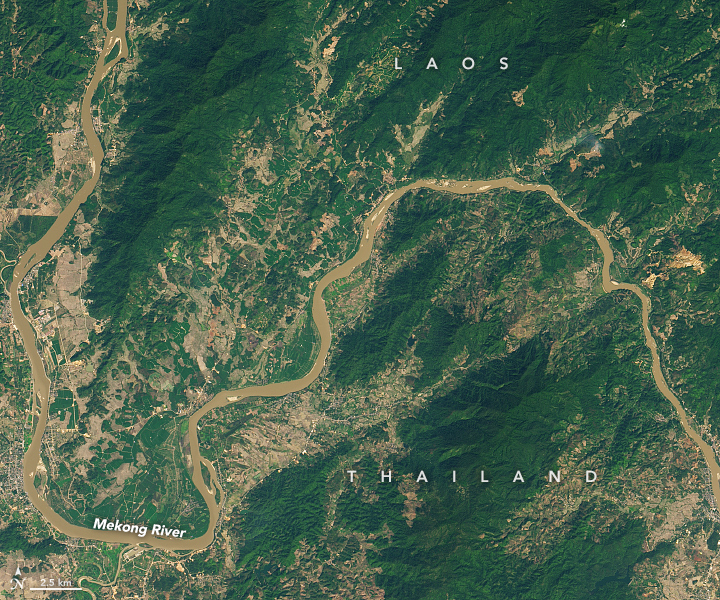 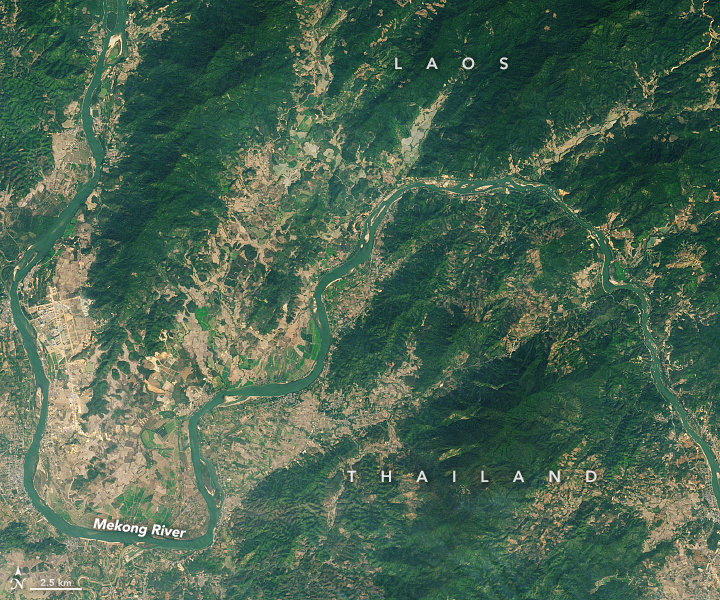 Mekong Turns from Brown to Blue-Green

Spanning six countries, the Mekong River is an important lifeline to nearly 60 million people across Southeast Asia. The fast-flowing river is a source of fish and helps transport sediments across the region, improving soil fertility for farmers. The sediments also give the river its signature muddy brown appearance. But for the past few months, the sediment loads have dropped and the Lower Mekong River has turned an unusual aquamarine color.

The color change was first reported in northern Thailand in November 2019, and has since spread along the Lower Mekong. The images above show the river near the town of Huay Xai in Laos. The left image shows the river under normal, sediment-laden conditions on January 27, 2015, compared to conditions on January 25, 2020. Both images were acquired by the Operational Land Imager (OLI) on Landsat 8.

The Mekong River Commission (MRC) stated that the water change is due to extremely shallow and slow-moving river flows. In turn, fine sediments have dropped out and created clearer water conditions.

The clearer water has promoted the growth of algae, which are usually carried away by river currents. Lower flows mean less disturbance of the sediments and the algae. It also means more sunlight can penetrate the water, allowing microscopic algae to grow on the sandy bottom. According to news reports, the high concentration of algae has been clogging fishing nets and making it difficult to fish.

The shallow water levels have likely been caused by a combination of drought and dams in the region. For the past few months, the Lower Mekong River has received little to no rain, about 20 to 30 percent below normal conditions from December to February. Additionally, new dams are also diverting and reducing the river’s natural flow—and it could persist. (The MRC reported that up to 97 percent of sediment flow to the river’s mouth could be blocked by 2040, if all future dam construction projects are completed.) The commission predicts that the blue-green color of 2020 may remain until river flow increases in the upcoming flood season, which starts in late May and contributes 80 to 90 percent of the river’s annual flow.