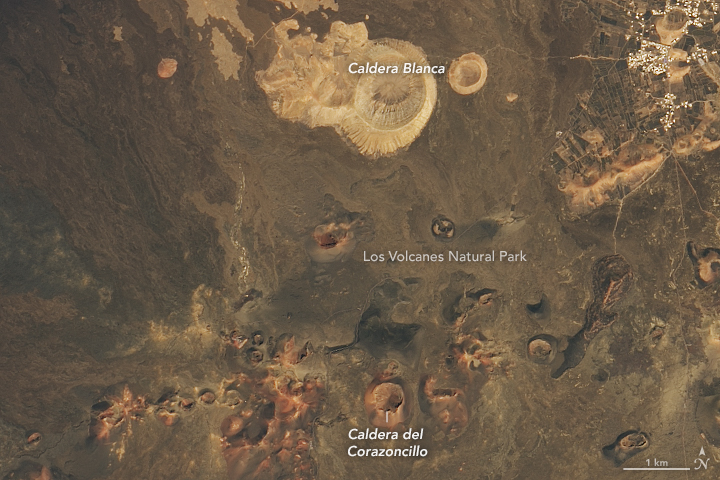 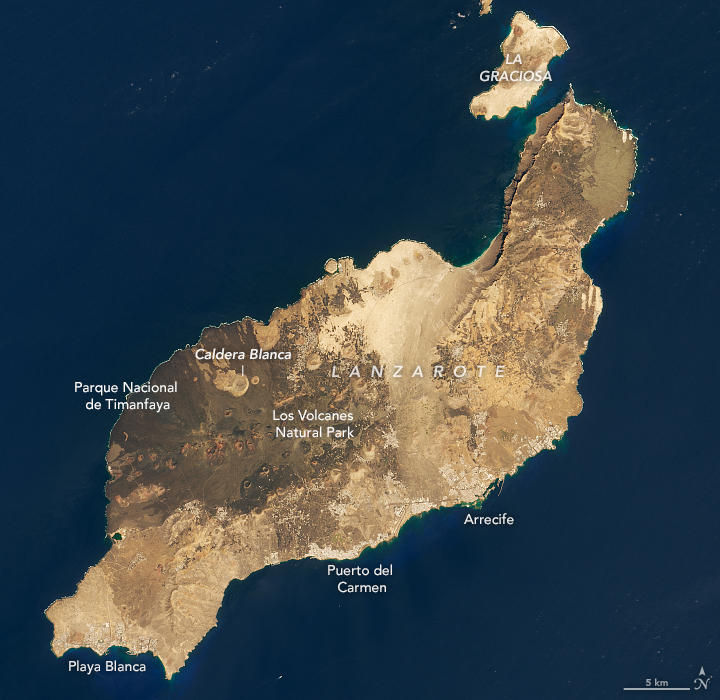 Off the northwestern coast of Africa, small clusters of land dot the Atlantic Ocean. The archipelagos include the Canary Islands, a Spanish-colonized island chain located just over 100 kilometers (60 miles) west of Morocco. Of the chain’s main islands and numerous islets, Lanzarote is one of the closest to the African mainland. It is also one of the driest and most barren, with rugged terrain that has compelled space agencies to train there.

The Operational Land Imager (OLI) on Landsat 8 acquired these images of the island on October 2, 2019. They show a landscape that is the result of an active volcanic history.

One notable eruption event started in 1730 and spanned six years, during which lava erupted from a 14-kilometer (8 mile) long fissure. Lava ultimately spread across 225 square kilometers, or one-third of the island. Another, shorter eruption in 1824 lasted 86 days, but still altered the landscape with new lava flows.

At times, the eruptions on the island have turned explosive when magma came into contact with cold groundwater. These explosive “phreatomagmatic” eruptions can produce small volcanic cones. One of these more prominent “tuff cones,” Caldera Blanca, measures 1140 meters (3740 feet) across and 450 meters (1500 feet) high. Its name is derived from its white color, a consequence of a colony of lichens that have taken up residence on its slopes.

Caldera Blanca and other volcanic structures are the centerpieces of Los Volcanes Natural Park. With a surface similar to that of the Moon and Mars, the park has been used to train astronauts and to test Mars rovers. It’s an outdoor classroom where astronauts and engineers can learn the techniques of field geology and geo-microbiology.

The island’s unique landscape has also been shaped by its desert-like climate with sparse rainfall. Because Lanzarote is flatter than the central and western islands in the archipelago, the cool, moist trade winds blowing pass right over it. In contrast, high mountain systems elsewhere in the Canary Islands trap moisture, producing rainfall on their northern coasts and a rain shadow on the leeward side.

Despite the dry climate and rocky landscape, some areas can support vegetation—mostly with human help. Since the eruption in the 1700s destroyed most of the fertile farmland, people have adapted by digging shallow basins and bordering them with half-circles of stacked lava rock. The figs, grapes, almonds, and other crops planted in the center of these basins receive some protection from the wind and harsh sunlight, and they stay hydrated with the help of mulch—in this case, a moisture-absorbing ash.