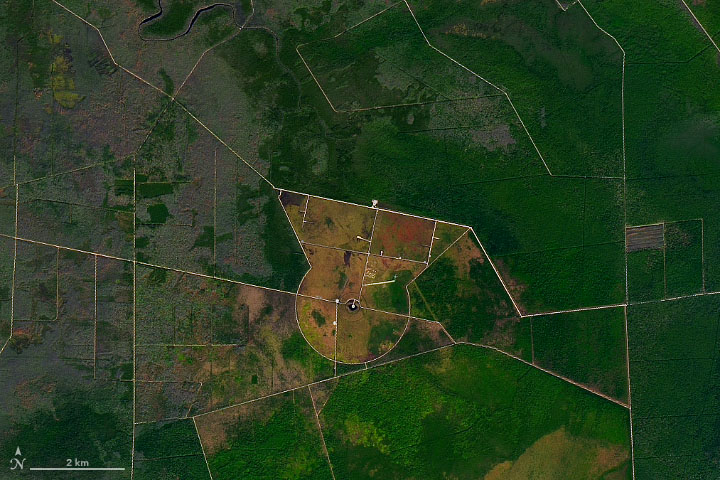 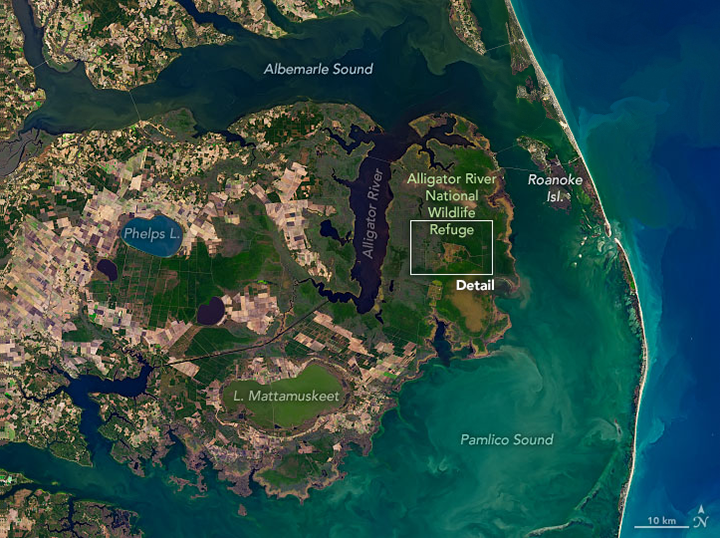 A Peninsula of Pocosin

Editor’s Note: This Image of the Day is the answer to the December Puzzler.

The Operational Land Imager (OLI) on Landsat 8 acquired this natural-color image of the refuge on November 25, 2019. The geometric patterns in the middle of the image are caused by the layout of roads, drainage canals, and targets within Dare County Bombing Range, a military site managed by the U.S. Navy and U.S. Air Force.

The bombing range and surrounding wildlife refuge protect an unusual freshwater shrub bog habitat called pocosin. The name is derived from an Algonquian word meaning “swamp on a hill.” Pocosin vegetation grows on slightly elevated patches of peat, a carbon-rich type of soil that sops up rain water and slowly releases it over time.

The refuge is home to the world’s only population of red wolves. Though the species was declared extinct in the wild in 1980, biologists began to transfer red wolves bred in captivity to the refuge in 1987 in an attempt to reestablish a wild population. About 40 wolves survive in the refuge today, along with one of the most concentrated populations of black bears in the southeastern United States. Both of these species—and many others—make use of the pocosin forests and shrubs that thrive on the peninsula. Common plants in pocosin bogs include pond pines, bitter gallberry, and fetterbush.

Pocosin ecosystems in this area were disappearing quickly in the 1980s because of logging and the spread of drainage canals for farms. Now that the wildlife refuge prevents new development, rising seas and saltwater intrusion are the biggest threat to the health of the peninsula’s pocosin. With some of the fastest rates of sea level rise in the eastern United States and the regular passage of hurricanes, researchers have found that salt water is getting pushed up networks of drainage canals on the peninsula at an increasing frequency and harming vegetation.

Some parts of the refuge have lost 70 percent of their trees since the 1980s, leaving growing swaths of “ghost forests.” An interdisciplinary team of scientists from North Carolina State University and Duke University has been mining decades of satellite data and conducting experiments in the field to better understand the processes that are killing so many trees. Their research shows that forest loss has been particularly pronounced after droughts and hurricanes. On the ground, the changes are “dramatic,” the refuge’s manager, Scott Lanier, told Coastal Review Online.