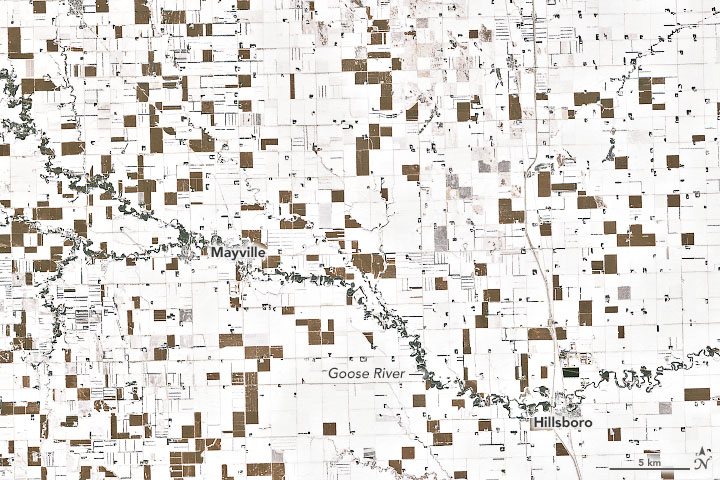 Patchwork of Corn in the Snow

In the wake of a potent winter storm in late November in the U.S. Midwest, an unusual pattern turned up in satellite imagery. A network of brown squares contrasts starkly with the otherwise snow-white landscape of eastern North Dakota.

Daryl Ritchison, director of the North Dakota Agricultural Weather Network, noticed the phenomenon and posted an image on Twitter. He noted the brown squares have a simple explanation. “I’m 100 percent sure it is all corn,” Ritchison said. His certainty is based on estimates of yet-to-be harvested corn from the U.S. Department of Agriculture, combined with local knowledge of where corn is planted and comments from farmers.

A detailed view of the corn and snow patchwork is shown above, as observed on December 3, 2019, with the Enhanced Thematic Mapper Plus (ETM+) on the Landsat 7 satellite.

The brown color of some patches doesn’t mean a lack of snow; about 6-10 inches of the white stuff is simply hidden from view. “The corn is planted at what is referenced as ‘row closure,’” Ritchison said. “Corn is touching corn, so the snow on the ground wouldn’t be visible from the air or satellite.”

Snowfall is common at this time of year in North Dakota. What makes the scene uncommon is that nearly all of the corn is usually harvested by this time of year. Not so in 2019. According to news reports, the amount of unharvested corn in late November 2019 was the largest since 2009.

Ritchison noted that a wet fall, combined with corn plants that contained too much moisture, provoked famers to leave the corn in the fields this year. Snow on corn stocks can clog harvesting equipment. But the bigger concern is the moisture content. It is more economically prudent for a farmer to wait and let the corn dry on the stalks—harvesting it in February or early March—than it is to harvest it now and have to dry it in storage facilities.