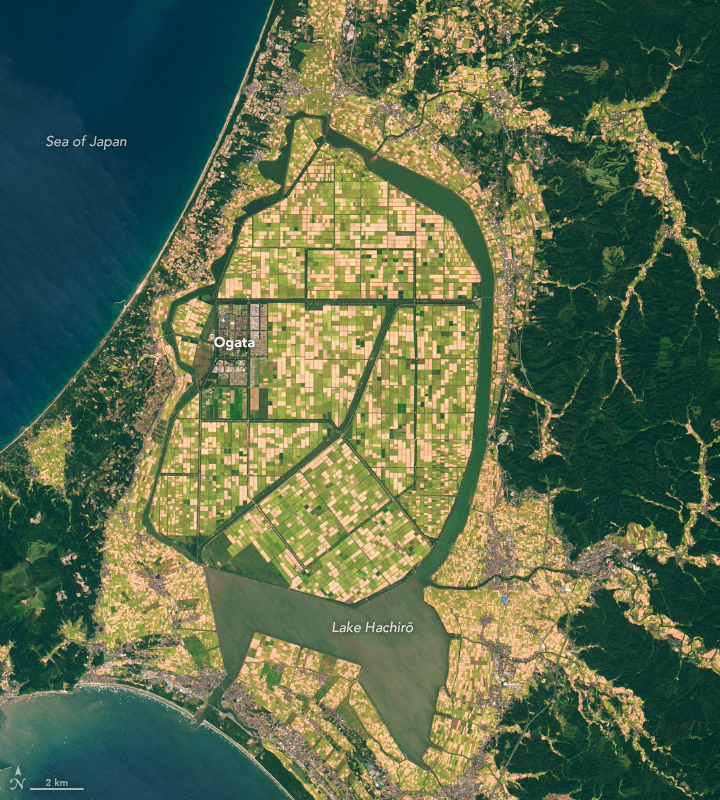 Rice Bowl from a Reclaimed Lake

In the 1950s, Lake Hachirō was the second largest lake by area in Japan. That began to change in 1957, the year when government authorities launched a major land reclamation project to boost rice production in northern Honshu and prevent food shortages.

Over two decades, the engineers converted most of the shallow lake—the lowest natural point in Japan—into rice paddies by pumping water away and dredging up mud from the bottom to create new land.

On September 27, 2014, the Operational Land Imager (OLI) on Landsat 8 captured this image of the remaining lake, the reclaimed farmland, and the village of Ogata. The lake is now the 18th largest in Japan.

Engineers also built an oval dike around the perimeter of the new land to protect it from flooding. And they installed a tidal gate in the southwestern part of the lake that prevents salt water from the Sea of Japan from entering, which caused the brackish water to transition to fresh water. In addition to the tidal gate, hydrologists use a series of drainage channels and pumping stations to regulate the lake’s water level and salinity. The lake, fed by several fresh water streams, is now used for irrigation, drinking water, and fishing.

The village was settled in the 1960s by 500 farming families hand-picked from all over Japan. Each family was given parcels ten times larger than the national average. “The idea was to show that by farming on a large scale, Japan could cut costs enough to make its agriculture world-competitive,” noted the Los Angeles Times in a story about Ogata.

Indeed, the town’s rice farms have become some of the most productive in Japan. However, runoff of excess nutrients into Lake Hachiro has made harmful algal blooms a regular occurrence as well.