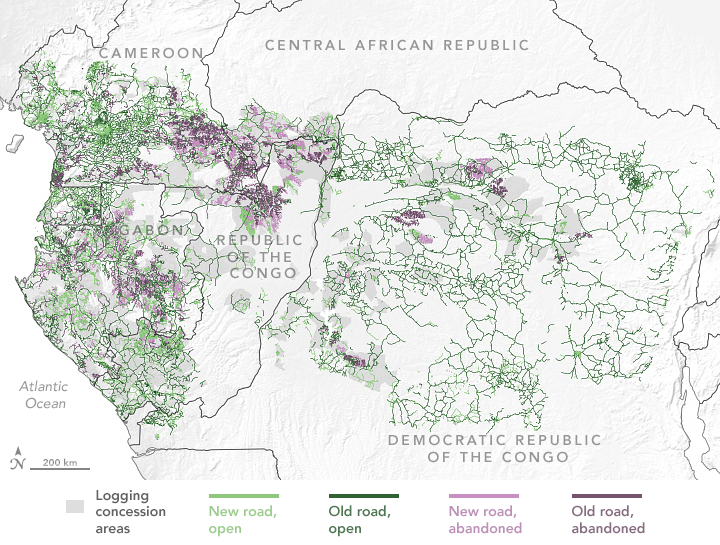 When a Road Leads to Deforestation

After driving through the Congo rainforest for half a day, researcher Fritz Kleinschroth hopped out of the pick-up truck to find more than a dozen butterflies caught in the front radiator grille. The butterflies varied in orange, red, white, and blue, representing just a sliver of the diversity of insects and wildlife living in the Congo Basin. The driver of the logging truck was less focused on the butterflies and more enthusiastic about the drive through the rainforest. On this new dirt road, drivers could roll along at 120 kilometers (75 miles) per hour and reach previously remote areas.

To Kleinschroth, the memory from his 2017 visit to the Republic of Congo symbolizes the struggle in the rainforests of central Africa: how can people boost the local economy but minimize their footprint on the ecosystem? How can people build roads that bring in lucrative business without permanently destroying the habitats of the butterflies, chimpanzees, and elephants?

Finding this balance has become more urgent in recent decades, as more roads have been cutting across the Congo Basin, which spans six countries and contains the world’s second largest tropical forest. Roads often lead to more human activity and to unregulated or destructive events in the rainforest. They make it easier for people to move deeper into the rainforest for poaching, mining, or illegal logging.

In a new study, Kleinschroth and colleagues examined how road networks in the Congo Basin have changed over the past 15 years and how they have affected deforestation rates. The scientists showed that the total length of roads in the Congo Basin increased by 60 percent between 2003 and 2018. The rate of forest destruction caused by new roads has quadrupled since 2000.

However, the study also brought some positive news. The team found that not all roads lead to long-term deforestation. By closing logging roads when they are no longer in use, people can help avoid permanent damage to the forest—suggesting economic development and environmental conservation can co-exist.

“Road networks have grown a lot, but not every road is the same,” said Kleinschroth, lead author of the study and ecologist at the Swiss Federal Institute of Technology (ETH Zürich). “We can ensure that a road, if properly managed, does not necessarily need to lead to long-term deforestation.” 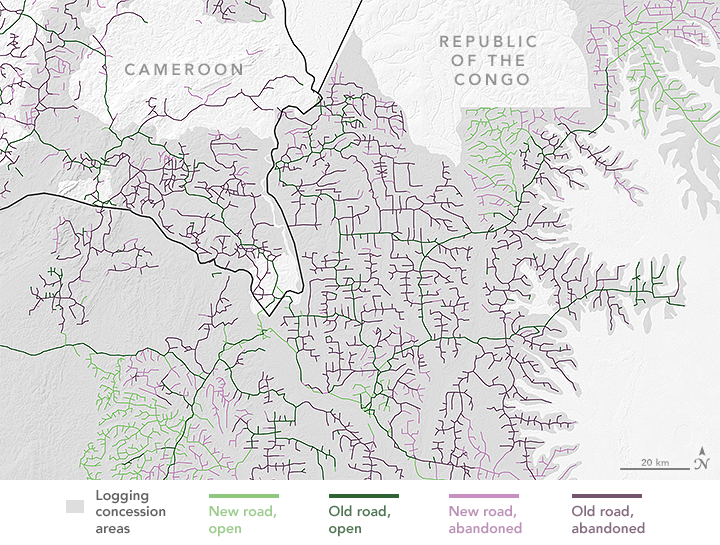 The maps on this page, based on data from Kleinschroth and colleagues, show the extensive road network across central African rainforests. Analyzing thousands of scenes from Landsat satellites, the team documented the three-decade evolution of roads across nearly two million square kilometers (1.2 million square miles). They classified the roads built before 2003 as “old” and those built after 2003 are labeled as “new.” Roads no longer in use are considered “abandoned,” and those still in use are “open.”

Some of the roads are tied to commercial logging, which has long been a main economic activity in the rainforest. Under long-term lease agreements (concessions) with local governments, private companies can move into a designated area of publicly-owned forest and harvest timber for a period usually lasting a few years. In this area, companies practice selective logging where only the most valuable tree species are cut, which usually results in cutting one tree per hectare on average. In order to harvest this timber though, the companies must build roads, usually unpaved, that allow the trucks to drive deep into the forest.

Other roads—usually outside of the logging concession areas—are aimed to improve public transportation networks. For instance, many roads are being built to complete the Trans-African Highway network, which aims to connect several countries with a paved highway. One of the last missing connectors in the network is a road that will connect the Republic of the Congo and the Central African Republic. This requires a new road, currently being built, that will be the first to directly cut through the Congo rainforest from north to south.

The researchers found that deforestation rates were highest within one kilometer of open old roads and outside of regulated logging concessions. Rates were higher, explained co-author and research professor at Northern Arizona University Nadine Laporte, because open roads help farmers establish small-scale agricultural plots, which are much more destructive to the land than selective logging activities. The Democratic Republic of Congo, where new logging concessions have been banned since 2002, has experienced the highest rates of deforestation due to agriculture and a high population density.

“I was surprised at how many roads were abandoned and didn’t lead to additional deforestation,” said Scott Goetz, a co-author and professor at Northern Arizona University. “This is a positive result in the sense that our results show properly managed forest concessions can lead to less deforestation.”

The images above show a logging concession in a wetlands area of northern Congo. Both images were acquired by the Operational Land Imager on the Landsat 8 satellite on April 24, 2019; the natural color view (green background) uses bands 4-3-2, while the false-color (blue background) uses bands 7-6-5. False-color makes it easier for researchers to distinguish between vegetation and bare soil—and therefore easier to spot open, bare soil roads versus abandoned roads with vegetation growing over them.

“Building a new road into an intact forest is very problematic from a conservation point of view,” said Kleinschroth. “But for those roads that are closed after use, the impacts on the forest are much lower.”

Kleinschroth hopes that logging-concession holders—along with governments, local communities, and international funders—will more actively manage road projects. After all, he knows that certain roads are necessary for economic development. Like the driver of the pick-up truck from Kleinschroth’s field trip, many locals see new roads as business opportunities. But if local leaders promote closing temporary logging roads and lean into more sustainable activities, some of the Congo rainforest may remain intact for future generations.