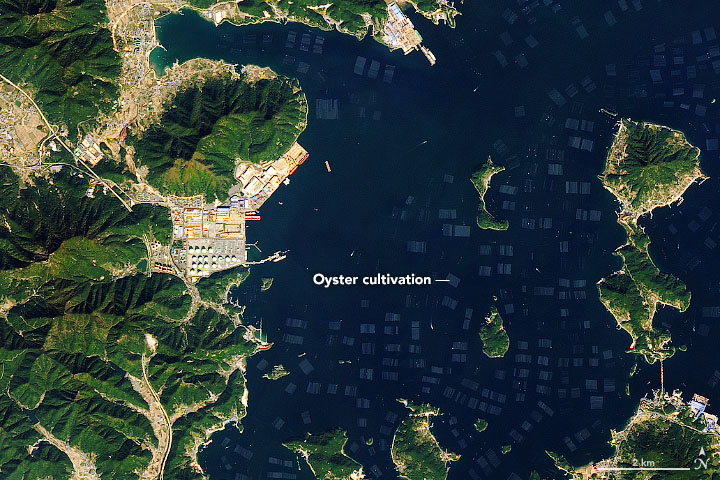 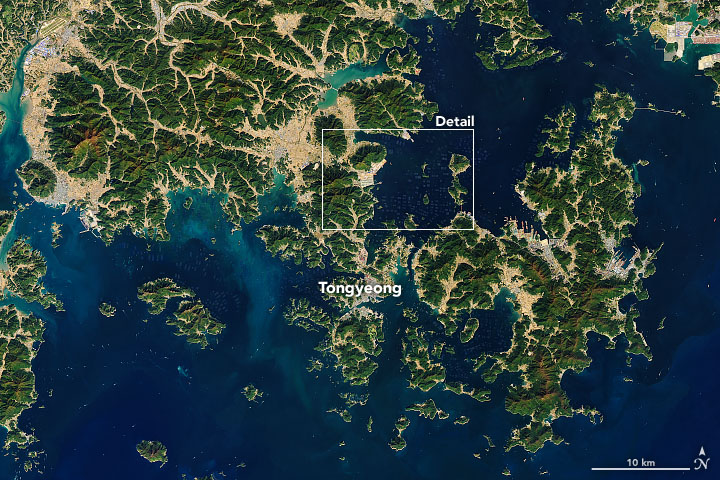 The Oysters of Tongyeong

Many islands dot the bays of the ria coastline of South Gyeongsang Province in South Korea. But around Tongyeong, a city of 140,000 people, satellites observe something else of note in the water—a series of structures that look a bit like the squares of a chess board. In most cases, the squares are areas where oysters are being farmed.

On November 6, 2019, the Operational Land Imager (OLI) on Landsat 8 acquired this natural-color image of long-line oyster cultivation near an industrial facility. In this area, oysters are often grown by suspending them from ropes or wires, which are held near the surface with buoys. The technique encourages oysters to grow quickly and develop strong shells.

After China, South Korea is the second-largest oyster producer in the world. Roughly 80 percent of this production comes from Tongyeong, which exports oysters to the United States, Japan, Canada, Hong Kong, and the European Union. Around Tongyeong, the oyster harvesting season begins in the fall, and this year’s haul appears to be unusually large. Downpours in the summer added extra nutrients to water and promoted growth, according to Arirang News.

While oyster farming has been a boost for the Tongyeong economy, the concentrated production has had noticeable effects on the environment. Notably, beaches in the area have unusually high concentrations of sytrofoam debris and microplastics because of the many buoys in the area, one study found.

Other types of mariculture are common in South Gyeongsang, including seaweed, mussel, halibut, and rockfish farming.