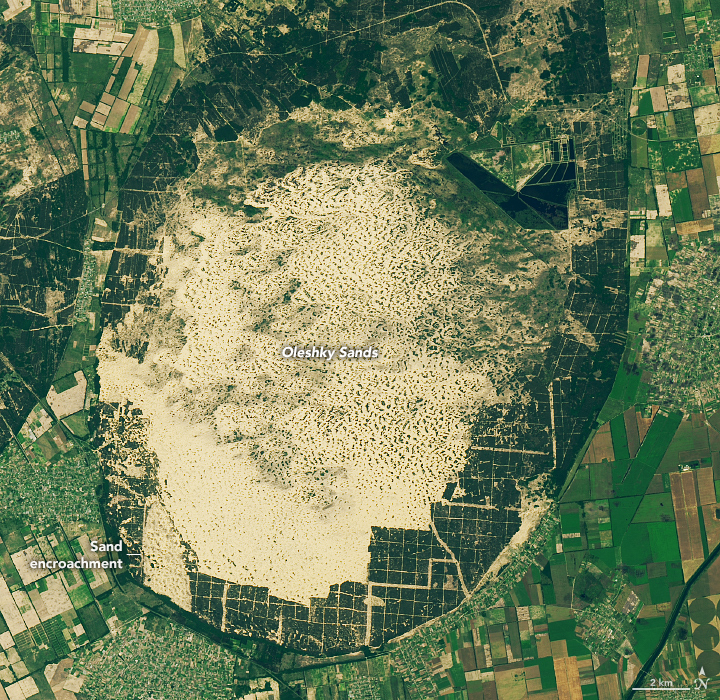 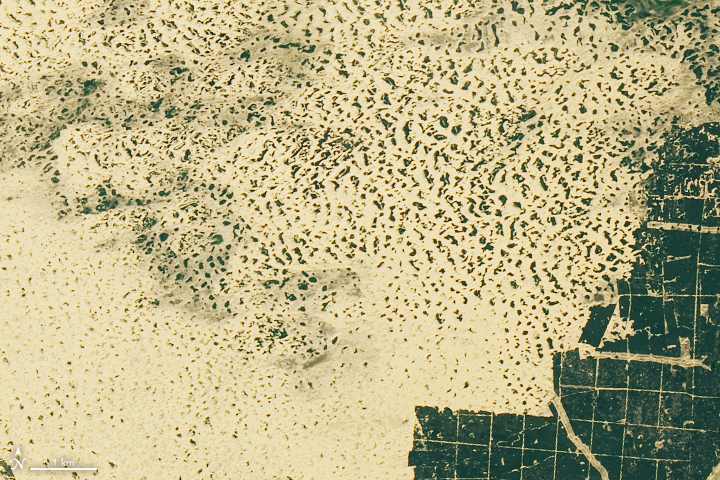 North of the Black Sea, the landscape of southern Ukraine is awash with eye-catching landforms that beg the question: what is that? About 65 kilometers (40 miles) northwest of the colorful Sivash lagoons, the land abruptly turns from forest to sand. This oval-shaped region, known as Oleshky Sands, is the largest expanse of sand in Ukraine and the second-largest in Europe.

The 161 square-kilometer expanse of semi-arid desert is visible in these images acquired on June 15, 2019, by the Operational Land Imager (OLI) on Landsat 8. At its widest, Oleshky Sands measures about 15 kilometers across.

Dunes rise up to 5 meters above the surrounding sand and punctuate the landscape. To try and prevent the dunes from encroaching on populated and agricultural areas, dense stands of pine trees were planted around the sandy expanse. Still, an analysis of 30 years of Landsat imagery (1987 to 2017) showed areas where sand had migrated into the forested areas, particularly on the northeastern and southwestern sides.

Researchers are uncertain what made the area turn to desert. One theory is that the land is a dried riverbed of the Dnieper River (the modern-day course runs north of this image). A common explanation, however, is that millions of sheep that were pastured here in the 18th and 19th centuries initiated the desertification, which has since been sustained by wildfire and wind erosion.

Episodes of fire continue to arise in the forested area around Oleshky. A notable case occurred in May 2018 when 25 hectares of forest were burned. Smoke from the fire was visible in images from the Moderate Resolution Imaging Spectroradiometer (MODIS) on NASA’s Terra and Aqua satellites.