On October 23, 2019, a blaze erupted in Sonoma County, California, near the small town of Geyserville. In six days, flames from the Kincade fire spread across more than 75,000 acres (303 square kilometers), becoming the largest wildfire by acreage in California in 2019. As of October 29, the fire had destroyed more than 120 structures and caused at least 2,000 people to evacuate.

Fierce winds in northern California—known colloquially as Diablo winds—played a large role in quickly spreading the fire. On October 27, wind gusts reached 96 miles (150 kilometers) per hour, which made the fire very difficult to stop. From October 26 to October 28, the fire grew by nearly 48,000 acres.

Forecasters expect another strong wind event on the night of October 29, which may again fan the flames. Firefighters are working on the ground and from the air to build containment lines around the wildfire. As of October 29, the fire was 15 percent contained.

This animation above shows winds over the western United States between October 20 and October 28, 2019. The strongest gusts appear bright yellow; weaker winds are purple. The wind data comes from the Goddard Earth Observing System Model 5 (GEOS-5), an experimental weather model that scientists at NASA use to analyze global weather phenomena. The GEOS model ingests wind data from more than 30 sources, including ships, buoys, radiosondes, dropsondes, aircraft, and satellites.

The Diablo winds tend to originate in the Great Basin region of Nevada and Utah. The winds are fueled by high-pressure air moving toward lower-pressure areas and lower elevations near the coast. On the way, the air masses pass over California’s mountain ranges and down through valleys, which causes the air to compress, heat up, and dry out. These hot, dry, gusty winds can exacerbate fire conditions and carry embers to the next patch of land. Similar winds—the Santa Anas—occur in southern California and are currently fanning the flames of the Tick Fire. 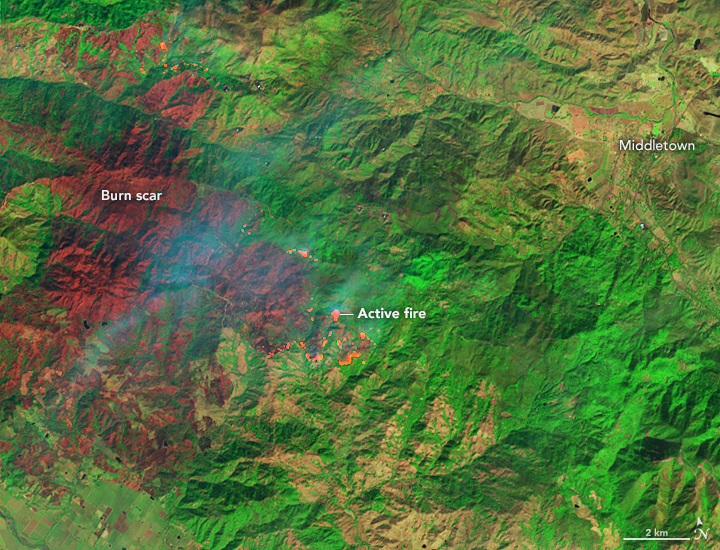 The image above shows a false-color view of the burn scar from the Kincade Fire as it appeared on October 26, 2019. The image combines shortwave-infrared, near-infrared, and red light from Landsat 8 (OLI bands 7-5-4) to better distinguish between burned vegetation (brown) and unburned vegetation (green). The brightest reds are active fire fronts.

The Kincade fire fits with an trend of larger, more destructive fires in California in autumn; fires in this season are strongly influenced by winds and dry weather. In addition to the impending wind storm, dry weather is expected continue in Northern California for the remainder of the week.