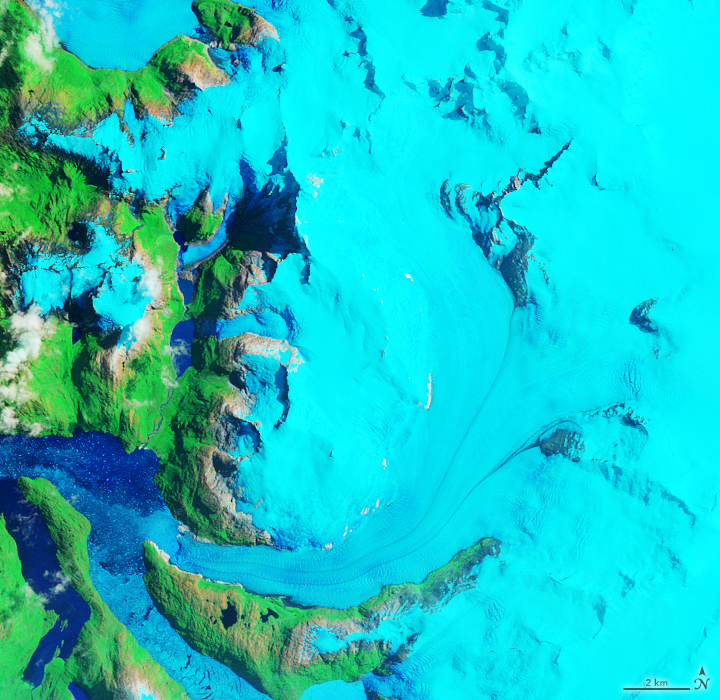 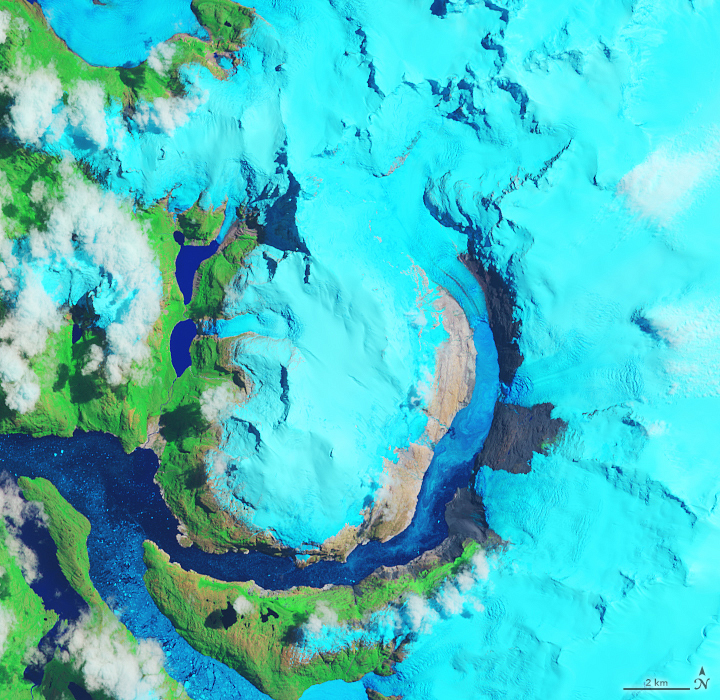 Is HPS-12 the Fastest Thinning Glacier?

A glacier in Patagonia with a forgettable name is becoming memorable for the speed at which it is losing ice. Some scientists think Hielo Patagónico Sur 12 (HPS-12) could be the fastest-thinning glacier in the world.

Satellites offer regular views of HPS-12, which is located in a remote part of the Chilean Andes about 430 kilometers (270 miles) northwest of Punta Arenas and 1,800 kilometers (1,100 miles) south of Santiago. The glacier is visible about one-third of the way down the western side of the Southern Patagonia Icefield, where the brown rocky edges of the glacier’s fishhook-shaped fjord contrast starkly with surrounding snow and ice. The fjord has become exposed as the glacier has retreated about half its length in three decades.

The false-color images above show a recent look at the changes. The left image was acquired on January 27, 1985, by the Thematic Mapper on Landsat 5 (bands 7-4-2). The right image was acquired on January 9, 2019, by the Operational Land Imager (OLI) on Landsat 8 (bands 7-5-3). Visible, near infrared, and infrared wavelengths were combined to better differentiate the types of land cover. Snow and ice are light blue, and water is dark blue. Rocks are brown, and vegetation is green.

In addition to retreating, HPS-12 has been dramatically thinning. Recent research published in Nature Geoscience offered new satellite-derived estimates of ice loss across glaciers in the Andes. Between 2000 and 2018, HPS-12 thinned by more than 30 meters per year along a 4-kilometer-section near the glacier’s tongue. The emergence of large rock outcrops (brown) along the fjord in recent imagery indicate how much ice is now gone due to the thinning and retreat of the glacier.

According to Etienne Berthier, a glaciologist at the University of Toulouse, thinning on HPS-12 reached as much as 44 meters per year. That was the maximum thinning observed at any point on the glacier—an area that by 2018 had disintegrated.

“To our knowledge, this is indeed the fastest observed rate of loss for a glacier,” said Berthier, co-author on the Nature Geoscience paper. “But we may find a faster one elsewhere on Earth. There is still a lot to learn about patterns of glacier mass loss in remote regions.”

Melting is a common occurrence across the Patagonian icefields, where ice has been disappearing at some of the highest rates on the planet. Many of the region’s glaciers melt not only from the top due to warm air, but also from below, where they come into contact with ocean and lake water. The fjord in front of HPS-12 contains seawater mixed with meltwater and sediment coming from the glacier.