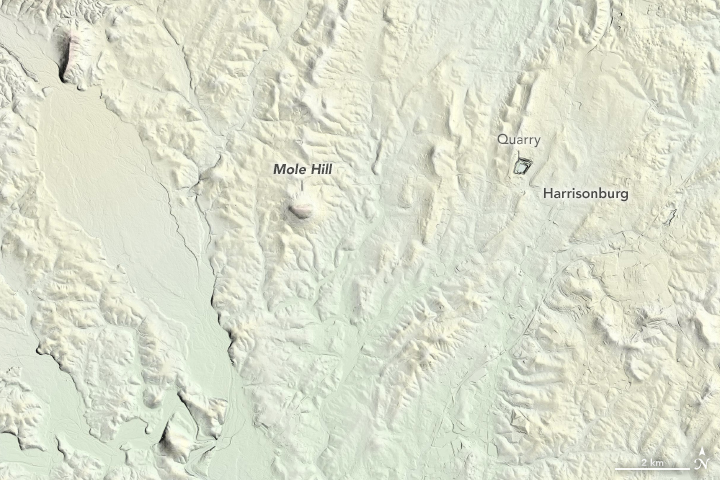 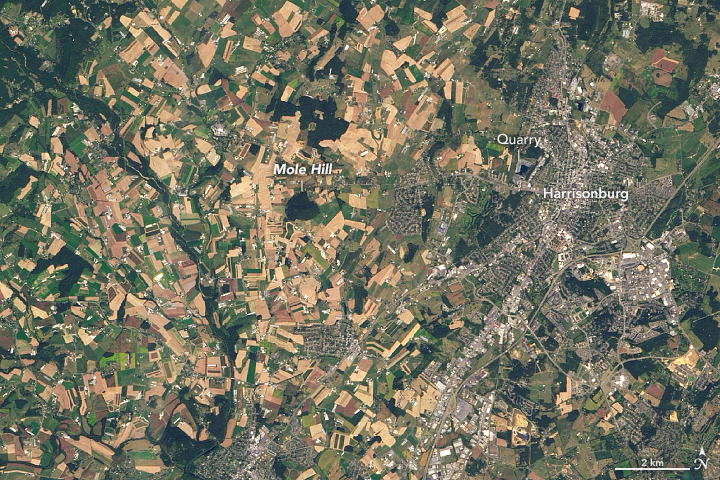 Today’s Image of the Day is the answer to the October 2019 puzzler.

Geologists generally describe eastern North America as being along a passive margin: a geologically quiet area where land transitions to sea, volcanic eruptions and earthquakes are rare or absent, and sedimentary layers build up slowly in shallow seas.

“But the joke among geologists is that passive-aggressive would be a better way to describe some parts of it,” said Elizabeth Johnson, a geologist at James Madison University. “There is actually quite a bit going on in the East, especially in Virginia.”

Since 2010, Johnson and colleagues have been studying dozens of small volcanic features spread across Virginia and West Virginia. Some of the features are 48 million years old, which makes them the youngest-known volcanic features in the eastern United States.

About 48 million years ago, Mole Hill was an erupting cinder cone that added a bit of basalt to the limestone landscape. After millions of years of erosion chipping away at the feature, what remains is the cone-shaped magma conduit that served as the volcano’s plumbing.

“The basalt that makes up Mole Hill is quite different from the sedimentary rocks you’ll find elsewhere in the Shenandoah Valley,” explained Johnson. “Basalt is a dense, dark rock that erodes more slowly than limestone.” Though it is among the tallest of nearly 100 young volcanic features the researchers have identified in Virginia and West Virginia, Mole Hill is not a particularly imposing feature. In the topographic map above, which is based on data from the U.S. Geologic Survey’s National Elevation Database, it does not stand out much from the other non-volcanic hills in the area.

But its mere presence is intriguing to geologists. There are plenty of volcanic rocks to be found in Virginia. Not far away, in other parts of western Virginia, you can hike past big patches of basalt that formed 560 million years and 200 million years ago, when ancient supercontinents were breaking apart. “But an eruption in the Shenandoah Valley just 48 million years ago?” said Johnson. “Nobody was expecting that.”

At first, scientists thought there might have been a hotspot plume that delivered magma to the surface and fueled these young volcanoes, but that did not match other clues they found in the field. “We think these eruptions were fueled by the bottom part of a tectonic plate breaking off and sliding back into the mantle, a process called delamination,” said Johnson. “That part of the plate had temperatures high enough for it to drip into the mantle.”

What are the chances that Mole Hill or volcanic features in neighboring counties will erupt any time soon? “Pretty much zero,” said Johnson. “They may be geologically young for the region, but these are extinct volcanoes.”