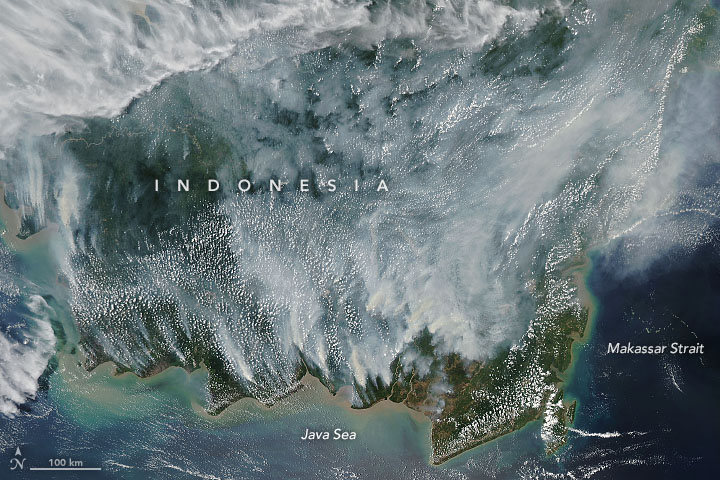 After several relatively quiet fire seasons in Indonesia, an abundance of blazes in Kalimantan (part of Borneo) and Sumatra in September 2019 has blanketed the region in a pall of thick, noxious smoke. According to news reports, many schools have closed and several airports have canceled, diverted, or delayed flights as smoke lingered over the two islands.

The Moderate Resolution Imaging Spectroradiometer (MODIS) on NASA’s Aqua satellite captured this image of Borneo on September 15, 2019. Smoke hovered over the islands and triggered air quality alerts and health warnings in the region. Many of the fires were burning in Kalimantan, which is known to have extensive peat deposits, which are made up of a mixture of partly decayed plant materials formed in wetlands. Satellites have detected evidence of fires in this region throughout August, but the number and intensity increased in the first week of September.

Fires are common in Kalimantan in September and October because farmers burn agricultural and logging debris to clear the way for crops and livestock. In Kalimantan, the intent is often to prepare the land for new plantings of oil palm and acacia pulp. The Operational Land Imager (OLI) on Landsat 8 acquired the image below, which shows fires burning in several oil palm areas in southern Borneo. Shortwave-infrared observations (bands 7-6-2) have been overlain on a natural-color image (bands 4-3-2) to highlight the locations of active fires. 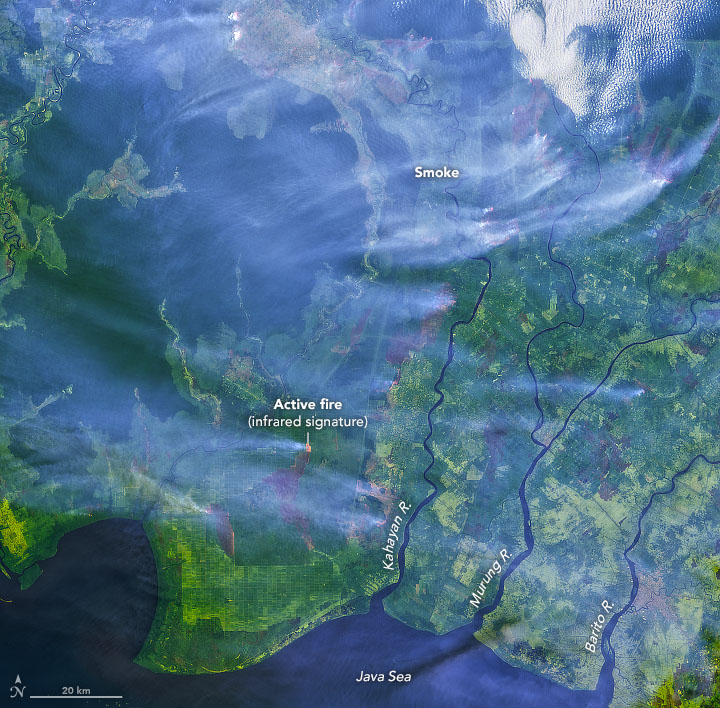 The map below shows organic carbon data from September 17, 2019, from the GEOS forward processing (GEOS-FP) model, which assimilates information from satellite, aircraft, and ground-based observing systems. To simulate organic carbon, modelers make use of satellite observations of aerosols and fires. GEOS-FP also ingests meteorological data like air temperature, moisture, and winds to project the plume’s behavior. In this case, smoke has stayed relatively close to the source of the fires because winds have generally been gentle.

GEOS FP, like other weather and climate models, uses mathematical equations that represent physical processes to calculate what is happening in the atmosphere. The model calculates the position and concentration of organic carbon plumes every five minutes. The model ingests new aerosol data at three hour intervals, new meteorological data at six hour intervals, and new fire data on a daily basis.

Peat maps available through the Center for International Forestry Research’s Borneo Atlas indicate that many of the fires were burning in or near areas with underlain with peat. Peat fires tend to be difficult to extinguish, often smoldering under the surface for months until wet season rains arrive. 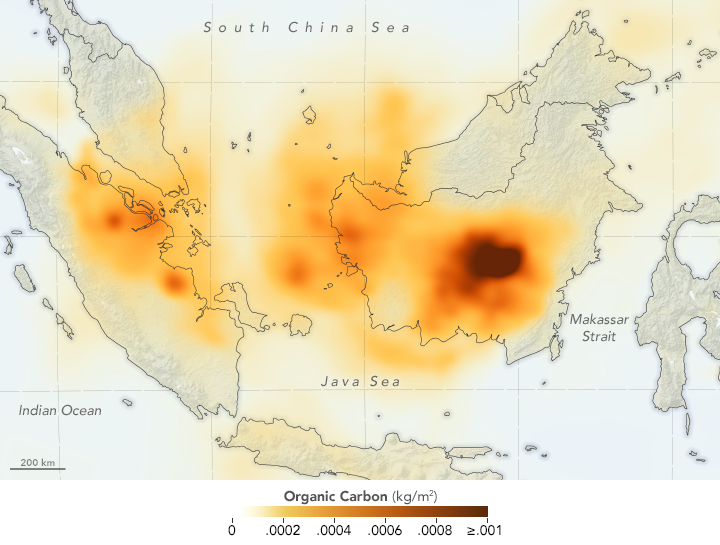 Peat fires release large amounts of gases and particles, including carbon dioxide, methane, and fine particulate matter (PM2.5). Carbon dioxide and methane are potent greenhouse gases that warm the climate. PM2.5 is a mix of fine particulates known for having negative health effects.

PM2.5—including types of aerosols called organic carbon and black carbon—are thought to be especially harmful because the particles are small enough to enter the lungs and bloodstream. Health research links exposure to black carbon to respiratory diseases, heart problems, and premature deaths. Evidence points to the possible toxicity of organic carbon aerosols as well, though the health effects are less studied than some other particle types.

As he has done in past fire seasons, NASA Goddard Institute for Space Studies scientist Robert Field has been tracking the progression of the fire season in Indonesia. “They are really in the thick of another major event now. It is reminiscent of 2015, though the buildup of smoke started a few weeks later this year because of rains in mid-August,” said Field, who is working on a project to better understand how various meteorological variables affect the likelihood that of vegetation burning. As part of that effort, he is also working on a NASA applied sciences project to integrate more satellite-based precipitation measurements into a fire danger monitoring system used by the Indonesian Meteorological, Climatological and Geophysical Agency.

“The fire counts from MODIS and VIIRS satellites have not been quite as high as they were in 2015 because of the late start, but the day-to-day increases in activity are now comparable to 2015,” said Field. “However, it is worth keeping in mind that many of these fires are burning underground or in areas with such thick smoke that satellites can’t detect them.”

During two past big fires years in Indonesia—1997 and 2015—El Nino conditions caused droughts that were major factors in exacerbating the fires. In 2019, El Nino conditions were neutral, but an oscillation of sea surface temperatures called the Indian Ocean Dipole appears to be responsible for the dry conditions this year, explained Field.