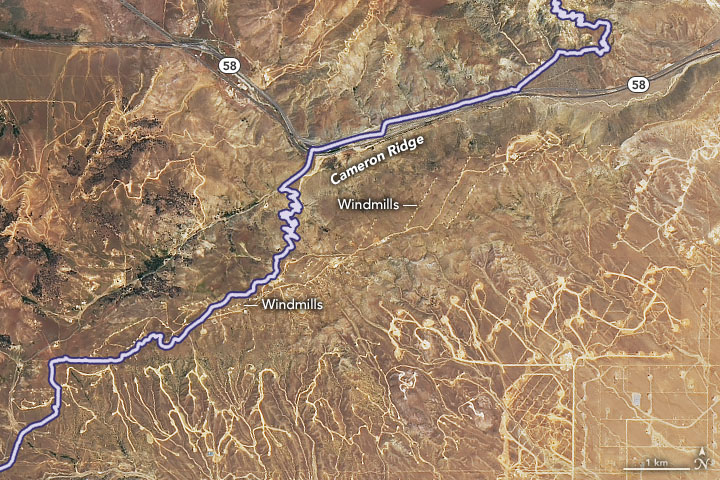 Today’s Image of the Day is from our feature story: Trailing the Pacific Crest from Space.

From a distance, the rows of windmills lined up in the desert seem to be silently performing their wind-to-energy duties. Encounter them up-close, however, and you can hear their striking ‘whoosh-whoosh’ sound. Hikers can have such a close encounter along a 6.5-mile (10-kilometer) section of the Pacific Crest Trail (PCT) in Southern California’s Kern County.

This segment across Cameron Ridge is just a short stretch of the 2,650-mile (4,265-kilometer) trail across the western United States from Mexico to Canada. But you still need to hike smart and be prepared. The weather can be extreme and, as the wind turbines indicate, typically very windy.

On July 1, 2019, the Operational Land Imager (OLI) on Landsat 8 acquired this image of Cameron Ridge where the PCT (purple) crosses Tehachapi Pass. The pass divides the Tehachapi Mountains (south) and the Sierra Nevada (north), and forms a narrow connection between the San Joaquin Valley and the Mojave Desert.

Note the abundance of wind turbines, connected by both straight and sinuous access roads. The turbine sites were not selected haphazardly; they are positioned to take advantage of the reliable winds, which come off the Pacific Ocean and ultimately get funneled at high speed through a mountain pass toward the southeast. According to a report for the California Energy Commission, the wind speeds through the pass are among the highest in the country, with an annual average of 20 miles (32 kilometers) per hour.

In 2018, news reports noted that Kern County had the largest concentration of wind capacity in the country, with the potential to generate more than 4,000 megawatts. The numbers come from a U.S. wind turbine database released by the U.S. Geological Survey and partners. (The database has a web-based tool to let users read up on more than 57,000 wind turbines across the country.)

The Cameron Ridge area also makes sense for building turbines because Tehachapi Pass is relatively close to energy-hungry cities such as Los Angeles (about 75 miles/120 kilometers away). The proximity also means the hiking trail is a manageable drive and a popular destination for day hikers.