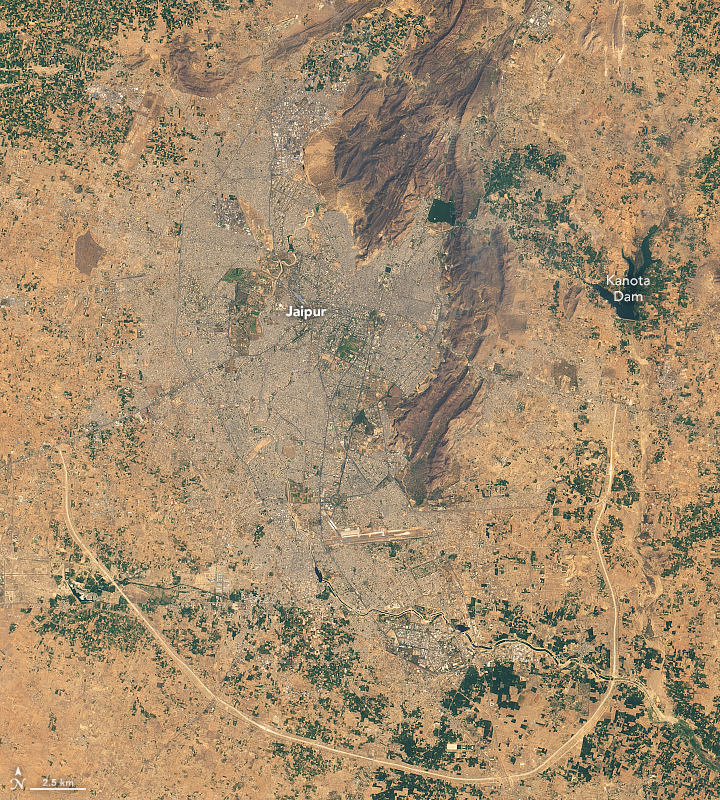 The First “Planned” City in India

There were few Indian rulers as passionate about architecture and astronomy as Maharaja Sawai Jai Singh, the founder of Jaipur, his namesake city. Establishing city grid structures and astronomy observatories, Singh left these gems (as well as literal gem markets) for the entire world to visit in Jaipur.

The images on this page show the city of Jaipur on March 18, 2019, as observed by the Operational Land Imager on Landsat 8.

Created in 1726, Jaipur is considered India’s first “planned” city in the Common Era. Unlike other medieval cities where the settlements grew organically over time, Jaipur was conceived and constructed in a single phase.

Singh founded Jaipur as a new location for his capital, moving it 11 kilometers from Amber due to congestion. Singh envisioned Jaipur as a trade and commerce city, attracting business from far away. Unlike the previous capital, which was located on hilly terrain, Jaipur was built in a flat valley. The city was protected by surrounding hills, which contained defense posts and forts. However, the hills inhibited Singh’s ability to expand outward, so he had to strategically plan the city before starting construction. 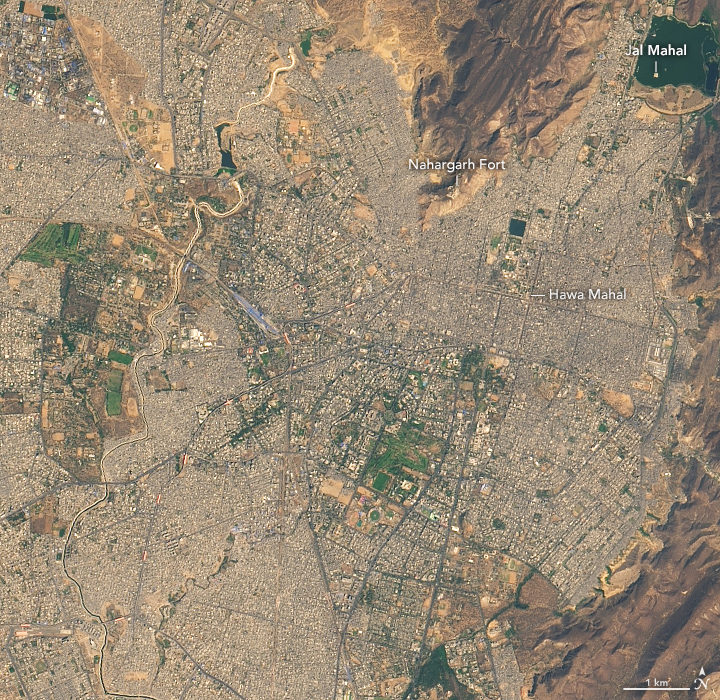 With help from Indian architect Vidyadhar Bhattacharya, Singh created a blueprint for the city based on an ancient Hindu doctrine called “Vastu shastra,” literally meaning the “science of architecture.” The doctrine describes designs and layouts of houses, cities, and gardens that bests blend architecture with nature.

Using principles of Vastu shastra, Singh designed Jaipur with a grid-like system, dividing the city into squares and with broad streets crisscrossing at right angles. Passionate about astronomy, he divided the city into nine squares—each square symbolizing one of the planetary bodies from Vedic astrology. He also built a large wall around the city to protect against invaders. The wall has entry gates, some of which were named after celestial bodies. The “Sun” gate was directed towards the east, while one of the west-facing gates is labeled “Moon.” Before Jaipur, only one ancient Indus Valley Civilization (2600 BCE) is known to show evidence of grid-planning.

Enclosed within Jaipur’s six-meter high wall lie several impressive monuments. Singh created the Jantar Mantar observatory, which includes around 20 astronomical instruments and the world’s largest stone sundial. Poet king Sawai Pratap Singh built a five-storied palace—called Hawa Mahal, or “the Palace of Winds”— for the royal ladies to enjoy the procession and day-to-day activities. When the Prince of Wales visited in 1853, the king ordered all the buildings to be painted pink, which historically represents welcoming and hospitality—giving Jaipur the nickname “Pink City.” The buildings in the historic center remain pink today.

Jaipur is one of the few places where the city walls, gates, and major monuments remain in their original condition today. Metro rail lines were built underground so the system would not disrupt the historical architecture. The city was listed as a UNESCO World Heritage Site in July 2019.