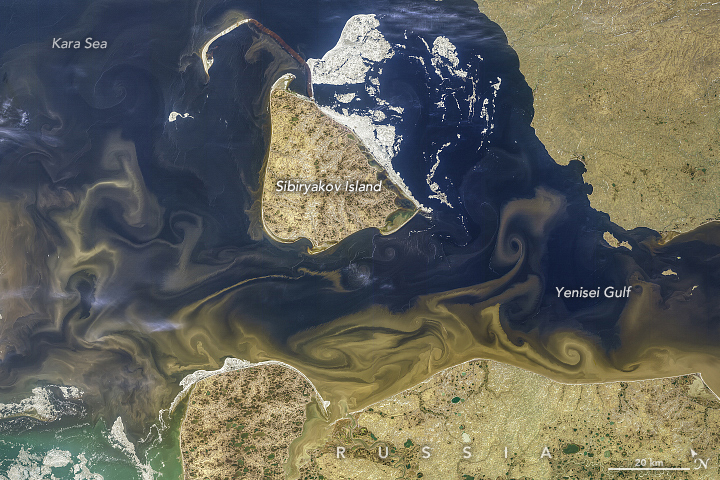 Tawny Swirls in the Kara Sea

Five major river systems move tremendous amounts of freshwater from North America and Eurasia and deliver it to the Arctic Ocean. Of these rivers, the Yenisei in the Russian Arctic drains the largest land area—more than 2.5 million square kilometers.

During its journey to the sea, the Yenisei and its tributaries can pick up sediment and organic material that make the water appear brown. This image, acquired on July 17, 2019, by the Operational Land Imager (OLI) on Landsat 8, shows the mixing of freshwater and seawater where the Yenisei flows into the Kara Sea.

In the image, traces of sea ice still cling to Sibiryakov Island, a reminder that just a few months earlier, snow and ice blanketed the region. In wintertime, the frozen landscape keeps the movement of sediments and organic carbon minimal.

Starting in springtime, snowmelt and thawing soils lead to a surge of meltwater, or “freshet.” About 60 percent of the sediments and organic materials that reach the Arctic Ocean do so in the months immediately following the freshet. Summer rainfall can also sweep materials out to sea.

The largest Arctic rivers, including the Yenisei, carry relatively little sediment. But as the planet warms, increasing erosion, thaw slumps, and other processes are expected to increase the amount of sediment flowing to the polar seas.

Most of the organic materials reaching the ocean currently come from permafrost-free soils. As permafrost thaws, more of the ancient carbon stored in the soil will be loose enough to flow into the rivers and seas. Scientists are seeking better ways to quantify the amount of sediment and carbon transported by Arctic rivers and to better understand how increasing amounts will affect the coastal ecosystem.

The land around Yenisei estuary, including Sibiryakov Island, are part of the Great Arctic State Nature Reserve, one of the largest reserves in the world.