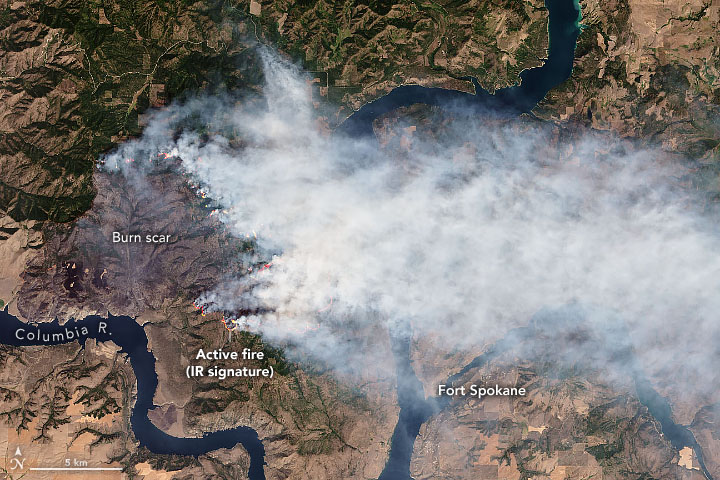 Flying through a Fire Cloud

On August 8, 2019, a team of atmospheric scientists got an exceedingly rare look at these clouds as they were forming. NASA’s DC-8 flying laboratory passed directly through a large pyrocumulonimbus that day as it was rising from a fire in eastern Washington. The flight was part of a joint NOAA and NASA field campaign called FIREX-AQ. Scientists are studying the composition and chemistry of smoke to better understand its impact on air quality and climate. 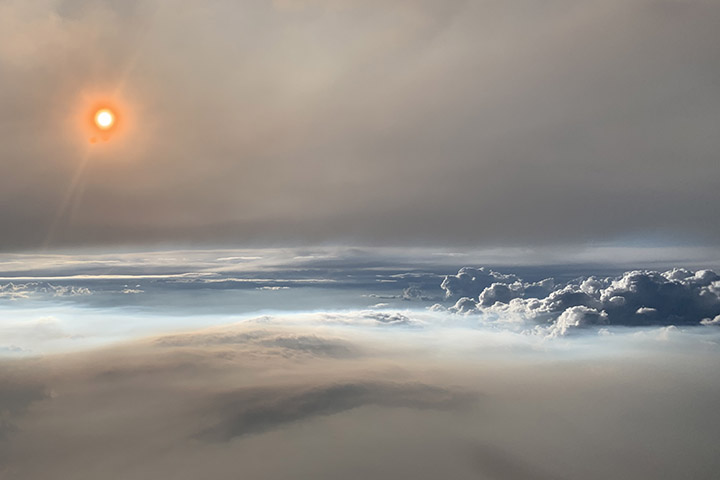 David Peterson, lead forecaster for FIREX-AQ, was in the cockpit of NASA’s DC-8. “The views were absolutely stunning,” said Peterson. “Very few photographs of large pyroCbs are available, especially from the air.”

The photograph above, shot from roughly 30,000 feet (9 kilometers), shows the setting Sun shining through thick smoke at 8 p.m. Mountain Time. Particles in the smoke reflect light in ways that make the Sun appear orange. The photograph below shows the smoke plume (gray) that fed the pyrocumulonimbus cloud (white).

The flight was the most detailed sampling of a pyrocumulonimbus in history, explained Peterson. A second research aircraft flew over the plume a few hours earlier in the day, and mobile labs on the ground also made detailed measurements. 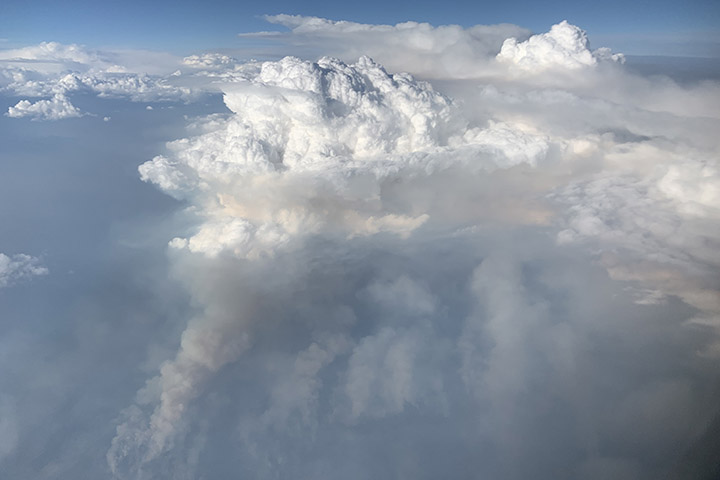 “PyroCb are like large chimneys, transporting a large quantity of smoke into the lower stratosphere,” explained Peterson.

When smoke does reach the stratosphere, it tends to spread globally and remain high in the atmosphere for longer periods—months or even years—than smoke that stays in the lower troposphere. One recent study concluded that the largest fire clouds can even lift quantities of smoke aerosols into the lower stratosphere that are comparable to a moderate-sized volcanic eruption.

An early morning thunderstorm ignited the Williams Flats fire on August 2, 2019. The Operational Land Imager (OLI) on Landsat 8 acquired a natural-color image of the blaze (at the top of the page) as it approached the north bank of the Columbia River on August 7, 2019. The image is natural color (OLI bands 4-3-2), overlaid with the infrared and shortwave infrared signature of actively burning fires.