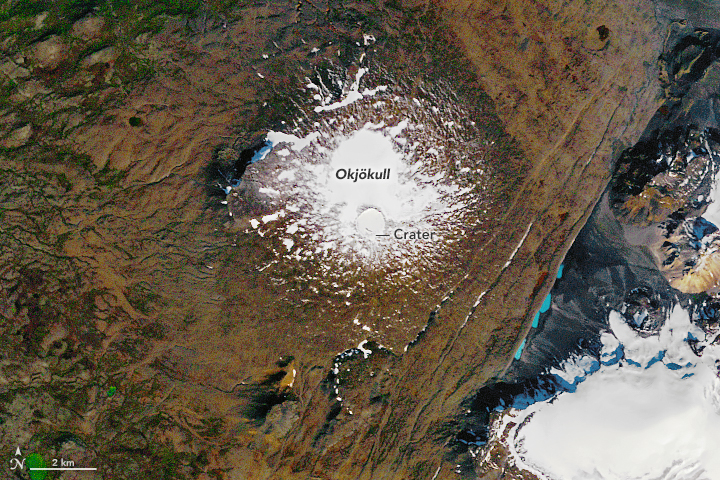 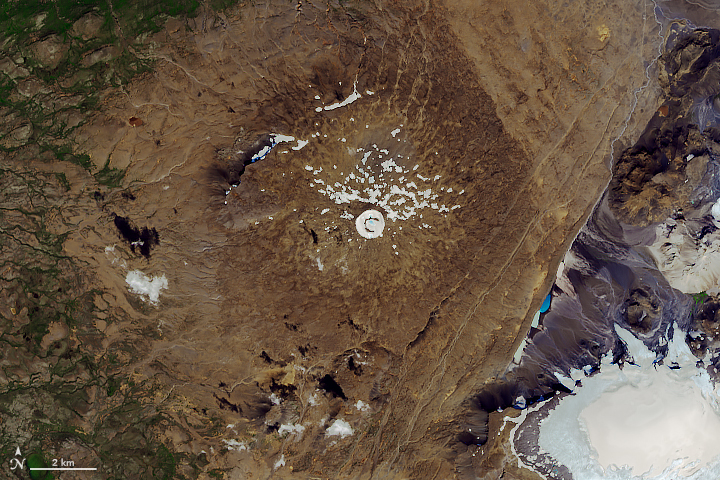 On August 18, 2019, scientists will be among those who gather for a memorial atop Ok volcano in west-central Iceland. The deceased being remembered is Okjökull—a once-iconic glacier that has melted away throughout the 20th century and was declared dead in 2014.

A geological map from 1901 estimated Okjökull spanned an area of about 38 square kilometers (15 square miles). In 1978, aerial photography showed the glacier was 3 square kilometers. Today, less than 1 square kilometer remains. The satellite images above show the glacier during the latter part of its decline, on September 14, 1986, (top) and August 1, 2019 (bottom). The images were acquired with the Thematic Mapper (TM) on Landsat 5, and the Operational Land Imager (OLI) on Landsat 8, respectively.

The dome-shaped glacier appears in the 1986 image as a solid-white patch, just north of the snow-filled crater. Snow is also visible around the glacier’s edges. In the August 2019 image, only a spattering of thin ice patches remain. Notice the areas of blue meltwater, which are likely associated with the mass of warm air that hit Iceland as it moved from mainland Europe to Greenland in late July.

The glacier’s demise is not just a matter of shrinking area. Glaciers form from snow that becomes compacted into ice over time. The ice then creeps downslope under its own weight, helped along by gravity. Okjökull has thinned so much, however, that it no longer has enough mass to flow. According to some definitions, a stagnant glacier is a dead glacier.

Okjökull, also called Ok (jökull is Icelandic for “glacier”), was part of the Langjökull group—one of Iceland’s eight regional groupings of glaciers. Ice covers about 10 percent of the island, making it an integral part of the landscape. Loss of glacial ice has wide-ranging effects, with the potential to impact water resources, infrastructure, and even the rising of the land as it rebounds under a lighter load of ice.

Scientists have noted that glaciers have disappeared from Iceland before, although perhaps none as ceremoniously as Okjökull. Anthropologists from Rice University produced a film about the glacier’s demise, and a plaque is set to be installed on the site of the former glacier.