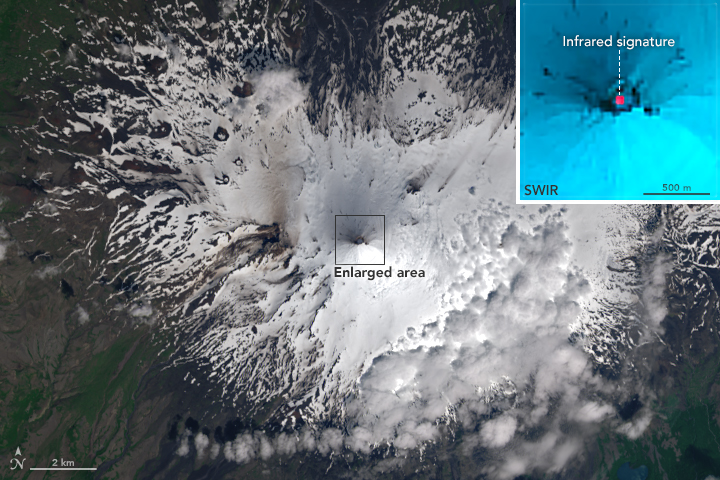 Unimak Island in Alaska is the largest and easternmost of the Aleutian Islands, and it is home to three glacier-covered stratovolcanoes. Two are dormant, but the third, cone-shaped Mount Shishaldin, emits a steady plume of steam from its summit crater. Occasionally minor blasts—volocanologists call them Strombolian eruptions—fling chunks of pasty lava into the air and unleash surface lava flows within the crater.

That is the type of activity that Alaska Volcano Observatory (AVO) scientists observed during a helicopter overflight of Shishaldin on July 23, 2019. The heightened activity in the summit crater prompted the U.S. Geological Survey to elevate its aviation alert from yellow to orange. The photograph below, taken by University of Alaska Fairbanks volcanologist David Fee, shows lava flows deep within the summit crater. 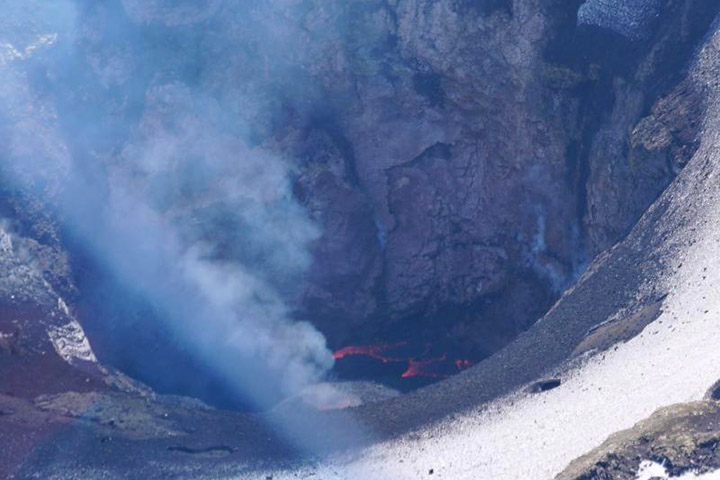 Signs of activity on the summit have been visible from space in recent weeks. On July 6, 2019, the Operational Land Imager (OLI) on Landsat 8 acquired the image at the top of the page. While nothing unusual is visible in the summit crater in the natural-color image (bands 4-3-2), observations from the shortwave infrared (bands 6-5-4) reveal elevated temperatures within the crater.

“While Shishaldin often produces a small steam plume and seismic unrest, there have not been any persistent strong thermal signals of this magnitude since 2015, when there was similar low-level eruptive activity,” said Hannah Dietterich, a volcanologist with the Alaska Volcano Observatory.

“This type of activity is fairly typical for Shishaldin. It does not necessarily mean that larger eruptions are likely, but they are indeed possible and have occurred in the past,” said Fee. Shishaldin has had significant eruptions a few times per decade. The most recent five eruptions occurred in 2014, 2004, 1999, 1997, and 1995.