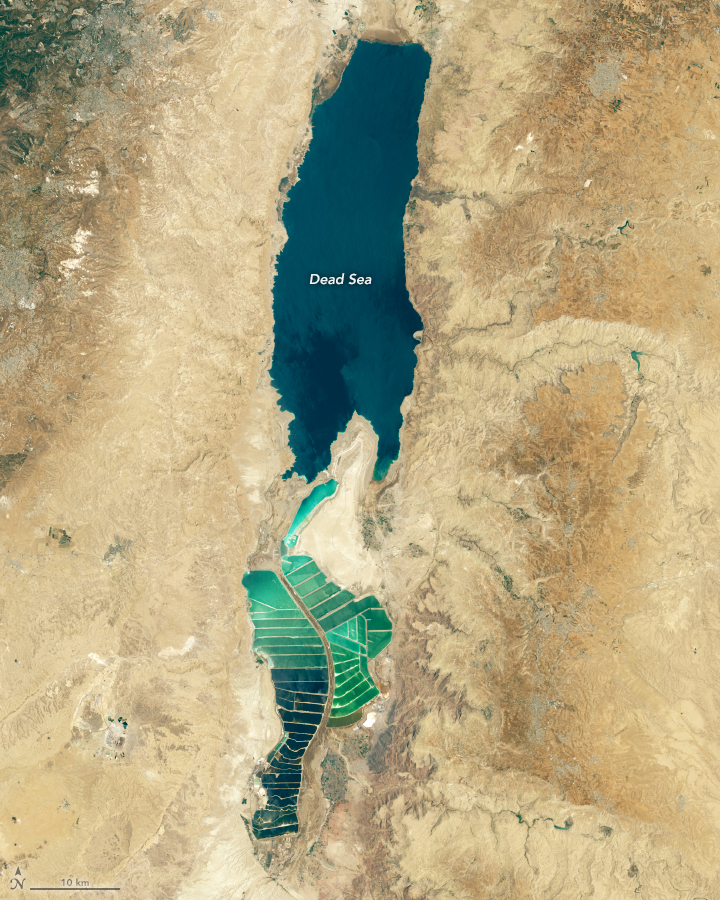 To say the Dead Sea is merely a salt lake is like calling the Great Wall of China a pile of bricks—it does not quite capture how unique it is.

The Dead Sea is the second-saltiest lake in the world. Its surface and shores stand at the lowest elevation (around 435 meters or 1,430 feet) of any land mass not under water or ice. With a salt concentration above 30 percent, the lake water is nearly ten times saltier than the oceans. Feeling like olive oil mixed with sand, the water is so dense that humans float without effort. The salinity makes it difficult for any plant or animal to survive—hence its name.

The top image shows the Dead Sea and the Jordan Rift Valley on July 21 2019, as observed by the Operational Land Imager on the Landsat 8 satellite. The green rectangles on the south end of the lake are salt evaporation ponds, which are used to extract sodium chloride and potassium salts for the manufacturing of polyvinyl chloride (PVC) and other chemicals.

For the past two to three decades, water levels on the Dead Sea have been dropping at about 1.2 meters per year—an increase from 0.7 meters per year in the 1970s and 1980s. Levels have primarily dropped as water has been diverted from its only tributary, the Jordan River, to serve surrounding communities with water. Lake water also has been pumped to the evaporation ponds.

As the water level drops, the lake becomes saltier, particularly near the surface. Scientists from the Dead Sea Observatory have discovered that salt has been precipitating out of the water and coating the bottom of the lake. They found the amount of salt on the lakebed (photograph below) depended on the season and the various salt densities throughout the layers of the lake. The salt layer has been growing about 10 centimeters (4 inches) thicker every year for the past four decades, showing seasonal alternations of the lake’s properties. 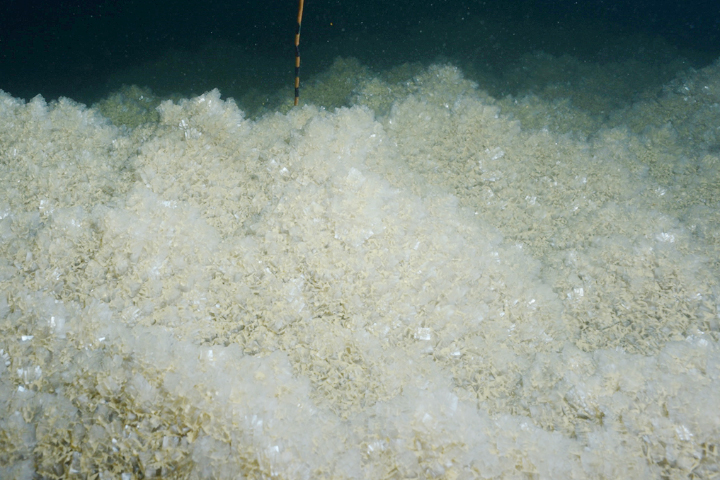 For instance, during the summertime, the lake forms a warm, less dense top layer and a colder, denser bottom layer. When the top of the lake is disturbed by a wave or motion, tiny parcels of warm water—called “salt fingers”—travel down to the colder water. As the warm salt fingers cool on the journey down, the water mass can hold less salt. The salt precipitates out and forms crystals on the lakebed through this process known as double-diffusive convection.

“In the ocean, the salt fingers might exist, but you’re not going to see them with the naked eye,” said Raphael Ouillon, a fluid dynamics expert at the University of California, Santa Barbara. “What is specific to the Dead Sea is that it’s almost at full saturation of how much salt can be dissolved, so salt precipitates out easily.”

The Dead Sea is the only salt lake where this “salt fingering” process is known to occur. Scientists think it may be a clue to how salt deposits formed millions of years ago on other ancient sea beds, and specifically, how salt layers are thicker in the central parts of the basins and thin or absent from the shallow parts of these basins. For instance, more than five million years ago, the Mediterranean Sea’s dried out and left thick deposits of salt. Although the sea has since refilled, this salt buildup could have formed through a similar mechanism as currently observed in the Dead Sea.