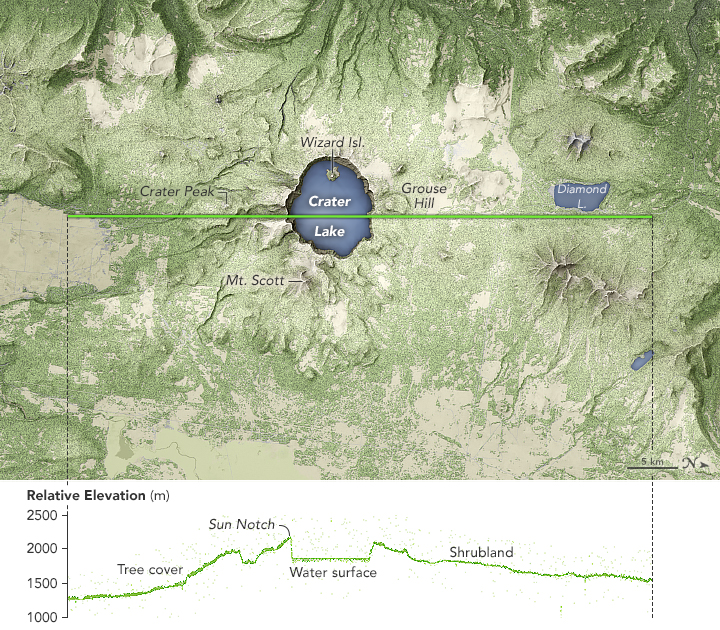 The Ups and Downs of Crater Lake

Today’s Image of the Day is the answer to the July 2019 puzzler.

Not every satellite produces the splashy photo-like pictures of Earth. Each instrument in orbit is designed for a specific purpose, such as measurements of surface elevation like the one shown here. The data are no less remarkable than images; in fact, they are a crucial component for filling out Earth’s whole picture.

For nearly a year, the Advanced Topographic Laser Altimeter System (ATLAS) on NASA’s Ice, Cloud and land Elevation Satellite-2 (ICESat-2) has been measuring the height of Earth’s surfaces in remarkable detail—down to about 10 vertical centimeters. The elevation measurement above from Crater Lake in south-central Oregon was acquired by ATLAS on June 24, 2019, and shows what is possibly the instrument’s first overflight of a volcano.

The elevation data show the distinct topography of Mount Mazama and the crater lake that fills its caldera. For reference, the elevation track has been laid over a map of the lake and surrounding terrain. The map shows land cover, derived from a Landsat-based dataset, overlaid on a map of the topography as observed by NASA’s Shuttle Radar Topography Mission (SRTM).

Moving from left to right (south to north), you can see the elevation increase gently and then more steeply up the flank of the volcano. The smaller-scale bumps are mostly tree tops. Where most satellite images offer a two-dimensional view of land cover, ICESat-2 provides a third dimension: tree height.

The track next crosses Sun Notch—a classic u-shaped valley that was carved by glaciers during the formation of the mountain. Some valleys were filled with lava during periods of eruptions. Others, including Sun Notch, escaped that fate. Hikers today can walk through this valley to the Sun Notch overlook on the crater’s southern rim.

The elevation then plummets hundreds of meters from the rim to the surface of Crater Lake. The 8- to 10-kilometer-wide caldera is the result of an enormous eruption and mountain collapse about 7,700 years ago. The lake that now fills the caldera is more than 580 meters (1,900 feet) deep, filling about half of the caldera’s depth. Crater Lake is the deepest lake in the United States, and the ninth deepest on Earth. The lake is too deep to see the bathymetry (ICESat-2 can measure bathymetry to a depth of 10 meters or more), but measurements of its surface elevation could be of interest to hydrologists.

“This transect highlights how ICESat-2 elevation measurements provide interesting observations to a diverse number of scientists,” said Lori Magruder, a scientist at the University of Texas and the ICESat-2 science team lead. “Terrestrial ecologists would be interested in looking at the terrain around the lake as an indication of habitat quality. Others might investigate the vegetation to link the canopy heights to biomass estimates. Finally, the hydrologist would be interested in the lake level as an indicator of rainfall, groundwater flow, or evaporation.”

Since ICESat-2 data were made available to the public in May 2019, scientists have started applying it to the mission objectives of measuring ice sheet elevation change, sea ice freeboard, and vegetation canopy height. Within the first six weeks of the the data release, more than 350 users made about 500,000 data downloads, and those data are already starting to show up in the scientific literature.