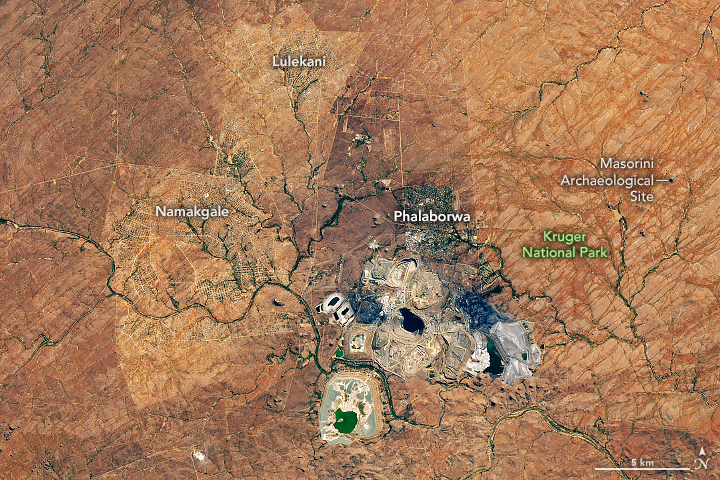 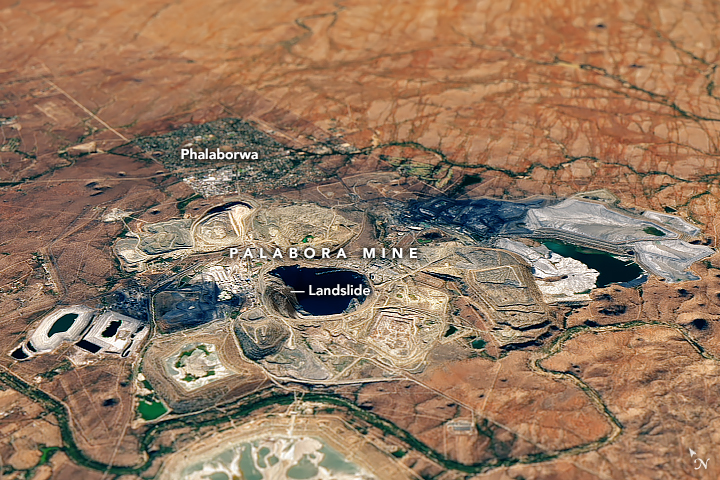 Plunging deep into the ground, the gaping hole of an open-pit mine is unmistakable from space. People have excavated such pits on every continent except Antarctica.

The mine pictured here has been growing vertically and horizontally near Phalaborwa, South Africa, for more than 50 years. The Operational Land Imager (OLI) on Landsat 8 acquired this image of the Palabora mine on July 2, 2019. It is South Africa’s largest open-pit mine, measuring almost 2 kilometers wide. It is about half the width of the world’s largest open-pit mine, which is at Bingham Canyon in Utah.

Copper mining began at Palabora in 1965, and by 1967 the open-pit mine was fully operational. The hole reached 800 meters down into the Earth before the depletion of resources made it uneconomical to continue mining in the pit. Operations moved underground (below the pit) and mostly out of sight in the early 2000s. The new mining method, known as block caving, involves extracting rock below an ore body, letting the ore break under its own weight, and then hauling the ore back to the surface.

Three years after the start of underground mining at Palabora, cracks grew in the wall of the pit until the northwest wall collapsed. The second image shows a detailed view of that landslide, which is still visible in 2019. The collapse damaged some infrastructure—roads, power and water lines, and a railway line—but critical mine infrastructure stayed intact and underground mining continues there today.

The site has become a case study in the challenges in transitioning from surface to underground mining. For example, researchers started using satellite data to improve the models that predict how mining underground will deform the surface.

People were mining South Africa’s copper and iron resources long before the advent of open pit mines. Some archaeological estimates date mining artifacts back to at least 800 CE. In neighboring Kruger National Park, more than 250 archaeological sites show signs of human occupation back about 1 million years ago.