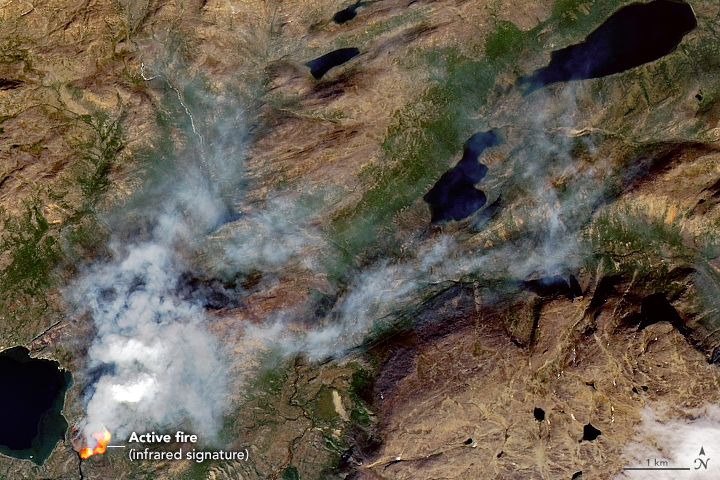 Another Fire in Greenland

Remote sensing scientists were surprised to observe a large wildfire in August 2017 in western Greenland near Sisimiut. Two years later, another sizable fire burned in the same region.

Satellites first detected evidence of the fire on the morning of July 10, 2019. The Operational Land Imager (OLI) on Landsat 8 captured an image of it in the afternoon that day. The image above is natural color (OLI bands 4-3-2), overlaid with the infrared signature of actively burning fires. At the time, southwesterly breezes blew smoke away from the fire.

The fire burned in Queqqata Kommunia, about 18 kilometers (11 miles) northwest of Sarfannguit and just east of Sisimiut. It occurred near a hut on the Arctic Circle Trail and was likely started accidentally by a hiker, noted University of Miami scientist Jessica McCarty. The fire appeared to be burning in an area with mossy wetlands (called fen) and heath shrublands.

Warm, dry weather helped set the stage for the fire. Meteorological data shows the region has been unusually hot and dry in recent months. And it was particularly warm the day that the fire burned. 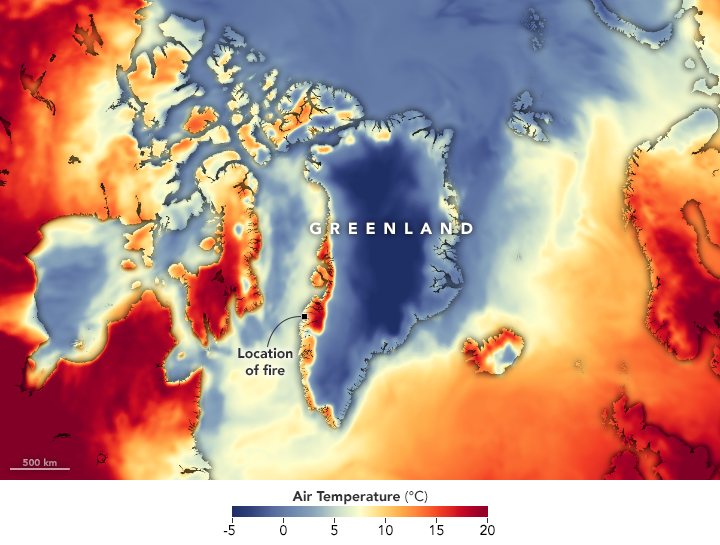 The map above shows air temperatures at 2 meters (about 6.5 feet) above the ground on July 10, 2019. The near real-time temperature data come from the GEOS forward processing (GEOS-FP) model, which assimilates observations of air temperature, moisture, pressure, and wind speeds from satellites, aircraft, and ground-based observing systems. The darkest red areas in western Greenland had temperatures approaching 20°C (68°F). The normal daily high in Sarfannguit in July is 10°C (50°F).

This fire was short-lived in comparison to the 2017 blaze, which persisted for two weeks. In this case, firefighters extinguished the blaze by July 11, the day after it began.