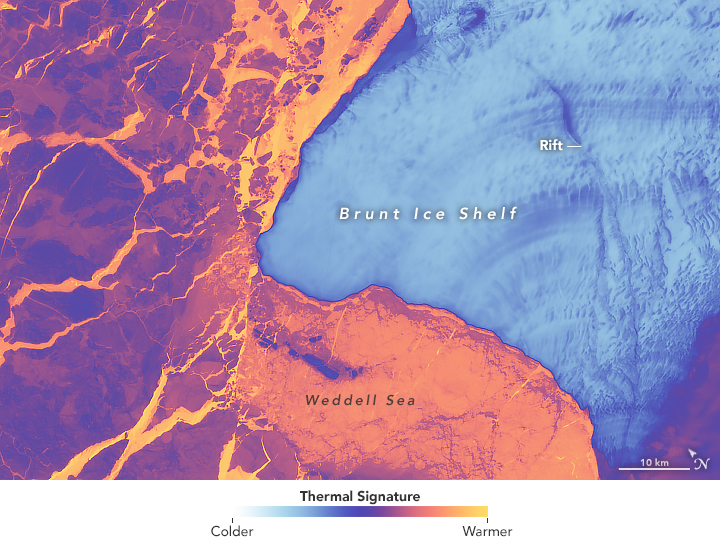 In Antarctica, the winter solstice has come and gone. It is now the dead of winter, which means no sunlight is hitting the enormous slab of ice poised to break away from the Brunt Ice Shelf. And without sunlight, scientists cannot acquire natural-color satellite imagery like we showed on January 2019 (during austral summer).

What has the Brunt Ice Shelf been up to in the dark? A specially acquired thermal image shows that, for now, it is still hanging on. The pending iceberg, about twice the size of New York City, has not yet broken off into the Weddell Sea.

The Thermal Infrared Sensor (TIRS) on Landsat 8 acquired this false-color image of the ice shelf on June 25, 2019. The data show the relative warmth or coolness of the landscape. Orange depicts where the surface is the warmest, most notably the ocean areas where the sea ice is thin or newly fractured. Light blues are the coldest areas of the ice shelf. Dark blue and purple areas are in a middle temperature range.

Much of the variation in temperature on the ice shelf and adjacent ice sheet is due to differences in topography. Darker blue areas are generally where the air has encountered an uneven landscape, causing warmer air to be mixed in from above.

Perhaps the most notable feature on the shelf, however, is the long rift that has been propagating northward. It still has a few kilometers to go before it cuts all the way across the shelf, at which point Brunt will likely lose at least 1700 square kilometers (660 square miles) of ice. As we noted in our story about the January 2019 image, that’s not a terribly large iceberg by Antarctic standards, but it may be the largest berg to break from the Brunt Ice Shelf since observations began in 1915.

The break is bound to occur; it’s just a question of when. The winter sea ice cover is extremely fractured and not likely to buffer the ice shelf from breaking free. There is a possibility that the break won’t happen before sunlight returns to this part of the continent in late August.