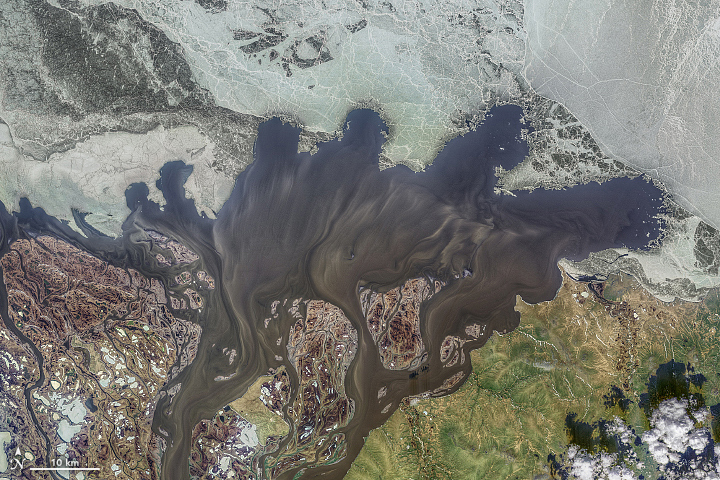 For about eight months of the year, the Kolyma River is frozen to depths of several meters. But every June, the river thaws and carries vast amounts of suspended sediment and organic material into the Arctic Ocean. That surge of fresh, soil-ridden waters colors the Kolyma Gulf (Kolymskiy Zaliv) dark brown and black.

This image from the Operational Land Imager on the Landsat 8 satellite shows the “blackwater” stream on June 16, 2019. Note that the East Siberian Sea remains covered with ice.

The Kolyma is the largest river system underlain with continuous permafrost. It is primarily fed by spring snowmelt and summer rainfall. The largest discharges usually occur in June, after the snow and ice start to thaw. The river has a mean annual discharge of about 136 cubic kilometers of water per year—making it one of the six largest rivers to drain into the Arctic Ocean.

Discharge levels and streamflow can be influenced by variations in climate but also human impacts. After the addition of a dam in 1986, researchers noted fluctuations in discharge in different sections of the river, which can affect vegetation patterns, ocean salinity, and Arctic sea ice formation.

Researchers have also examined the concentration and composition of dissolved organic matter in the Kolyma River and found humic substances—organic compounds that make up the major organic component of soil—during the spring thaw.

The Kolyma region has a long history of human activity. Under Joseph Stalin’s rule in the mid-1900s, Kolyma was a notorious Gulag labor camp for gold mining, road building, lumbering, and construction. In the much deeper past, more than 10,000 years ago, the land was occupied by ancestors of Native Americans, according to geneticists and archaeologists.