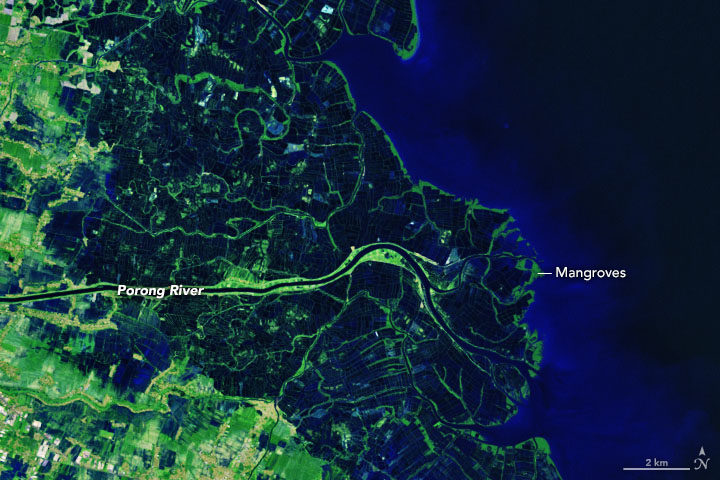 Lusi in the Sea with Deltas

While geologists continue to probe and debate the inner workings of the Lusi mud flow, the effects of the eruption continue to reverberate through the surrounding communities and ecosystems. Hot mud first began gushing from a rice field in East Java, in 2006. More than 13 years later, it has displaced more than 40,000 Indonesians, and the mud continues to flow.

Some of the most visible changes have played out at the Porong River Delta, about 20 kilometers (12 miles) to the east of the main Lusi vent. For more than a decade, authorities have been diverting excess mud and water into retention ponds and then the Porong River. Over time, the increased load of sediment has expanded the delta on the Java Sea coast and created new space for mangrove forests.

This pair of false-color Landsat satellite images show the estuary and delta in 2003 and 2019. The images were made using a combination of shortwave infrared, near infrared, and visible light (bands 6-5-4). This band combination makes it easier to distinguish between dry and wet areas. It also accentuates vegetation.

With so much sediment flowing down the river, the shoreline has thickened and moved east by a few kilometers. In the 2019 image, mangrove forests (green) are clustered along the eastern edge of the delta. Farther inland, shallow aquaculture ponds for raising shrimp and milkfish dominate the landscape.

In some areas, the mangroves had help in spreading. In 2009, the Indonesian government began constructing an artificial island—Lusi Island—with the excess sediment that was piling up at the mouth of the river. Within a few years, land managers had established mangrove plantations to transformed a muddy, brown island into a lush, green habitat. The island is currently being used as a fishery, but there are plans to turn it into a tourist destination eventually. 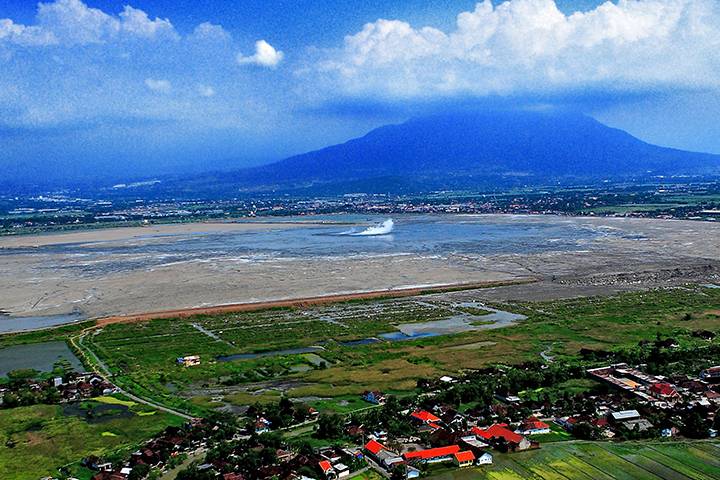 While people have adapted to the ongoing mud flow, it has not always been easy. Indonesians who lost their homes have been engaged in lengthy battles for compensation. People living near the earthen barriers that contain the mud now worry that the next rainstorm could be the one that breaches those levees and floods their homes.

Fish and shrimp farmers operating in the Porong River’s flood-prone estuary have had to adapt to the increased load of sediment. Many have struggled to stay in business as the mud makes it harder to raise shrimp and milkfish.

Meanwhile, fish that can tolerate mud now dominate the river downstream of the disaster area. “The rest die,” Dewi Hidayati, a biologist at the Tenth of September Technological Institute, told Foreign Policy. Her research shows that Lusi’s mud, as well as the fish in the area, have unusually high concentrations of aluminum. Since the water has a normal pH, the metal is not thought to be harmful to people, but it could become a hazard if the water becomes too acidic.

For Mark Tingay, a University of Adelaide scientist who has studied the eruption, Lusi offers a potent reminder of how little is known about mud volcanoes in comparison to their magma-filled cousins. Even more important, he said, is to appreciate how devastating the event has been to people who lived through it.

“This is totally unlike most disasters,” he said. “Think about an earthquake or a volcanic eruption. They cause terrible damage and devastation, but they end. Afterwards, people can go back to their land. They can return home and rebuild. Not so with Lusi. Tens of thousands of people have lost their homes and can never return.”