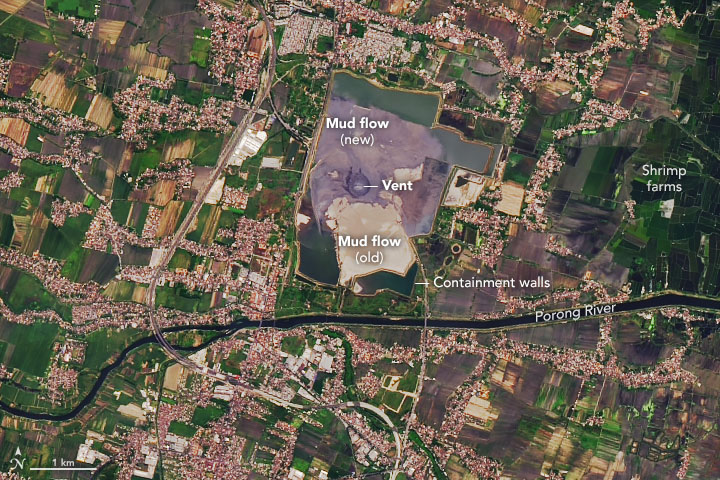 A Muddy Mess in Indonesia

On May 29, 2006, hot mud and gas began gushing from a rice field near a gas exploration well in East Java. More than a decade later, the Lusi mud flow continues on the Indonesian island. (The name is a combination of lumpur, the Indonesian word for mud, and Sidoarjo, the location of the flow).

Over the years, flows of boiling mud from Lusi have displaced more than 40,000 people, destroyed 15 villages, and caused nearly $3 billion in damage. It has become one of the most dramatic and damaging eruptions of its type. Some villages have been buried by layers of mud 40 meters (130 feet) thick. The mud, which has a consistency similar to porridge, pours constantly from Lusi’s main vent. Every thirty minutes or so, surges in the flow send plumes of water vapor, carbon dioxide, and methane shooting tens of meters into the air.

The Operational Land Imager (OLI) on Landsat 8 acquired an image (above) of the mud flow on June 11, 2019. The dark brown areas have fresh, liquid mud on the surface; the lighter areas have dried into a hard surface that is strong enough to walk on. In the early years of the eruption, mud oozed over homes, factories, highways, and farmland. Now it spreads within a network of earthen levees, retention ponds, and distribution channels that form a rectangular grid around the main eruptive vents. Channels direct the mud into holding ponds to the north and south. Large volumes of mud get flushed into the Porong River, which flows east toward the Bali Sea. 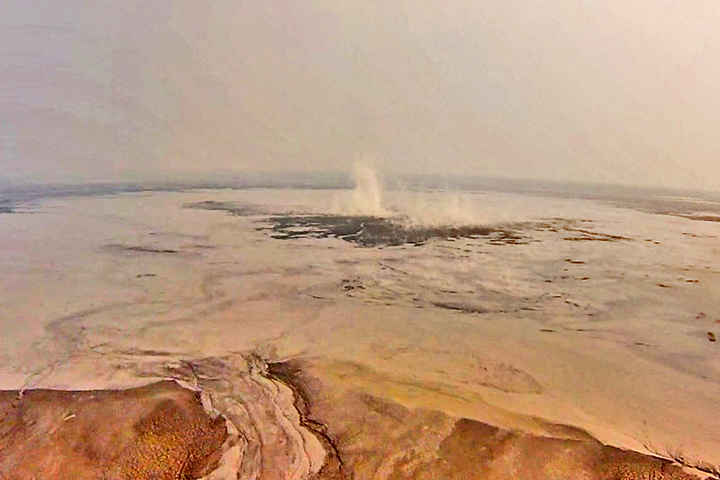 Much about Lusi remains the subject of scientific research and vigorous debate. Many scientists who have studied Lusi think exploratory drilling for natural gas triggered the eruption. Others argue that an earthquake that occurred two days before the eruption played a more important role.

In the immediate aftermath, there were several attempts to staunch the flow of mud. The gas company pumped mud and cement down the exploratory well. Experts dropped chains of thousands of small, cement spheres into the vent to try to choke it off. And engineers built earthen levees in attempts to redirect the mud.

Yet the mud kept flowing. More than 13 years after the eruption began, about 80,000 cubic meters (3 million cubic feet) of mud still ooze from Lusi each day—enough to fill 32 Olympic-sized pools. That is down from 180,000 cubic meters during Lusi’s peak flows, but it is still quite high, explained University of Oslo geologist Adriano Mazzini.

Scientists also disagree about what makes the Lusi eruption so long-lived. Mark Tingay, a geologist at the University of Adelaide, thinks tectonic processes just happened to set up a situation in which Lusi is able to draw from an unusually large and warm reservoir of water that is under very high pressure. “This vast amount of highly pressured fluid was sitting trapped—until the seal holding these fluids down was breached,” he said. “What we are seeing is that highly pressured water being released over time.”

Mazzini argues that Lusi is connected to a neighboring volcano that provides it with a steady energy source. “Several of our studies, including gas and water geochemical surveys and ambient noise tomography, clearly show that a nearby volcanic complex and the Lusi plumbing system are connected through a fault system at a depth of about four kilometers,” he said.

Despite the disagreements about what triggered the eruption and what sustains it, many scientists expect Lusi to spew mud for a long time. “I wouldn’t be surprised to see it continue for decades,” said Michael Manga, a geologist at the University of California, Berkeley.

Editor’s Note: Read a second story about the downstream effects of the Lusi mud flow here.