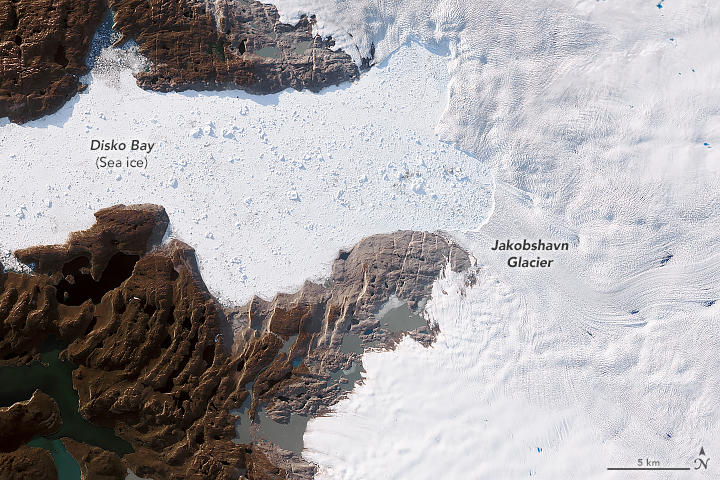 Jakobshavn Glacier in western Greenland is notorious for being the world’s fastest-moving glacier. It is also one of the most active, discharging a tremendous amount of ice from the Greenland Ice Sheet into Ilulissat Icefjord and adjacent Disko Bay—with implications for sea level rise. The image above, acquired on June 6, 2019, by the Operational Land Imager (OLI) on Landsat 8, shows a natural-color view of the glacier.

Jakobshavn has spent decades in retreat—that is, until scientists observed an unexpected advance between 2016 and 2017. In addition to growing toward the ocean, the glacier was found to be slowing and thickening. New data collected in March 2019 confirm that the glacier has grown for the third year in a row, and scientists attribute the change to cool ocean waters.

“The third straight year of thickening of Greenland’s biggest glacier supports our conclusion that the ocean is the culprit,” said Josh Willis, an ocean scientist at NASA’s Jet Propulsion Laboratory and principal investigator of the Oceans Melting Greenland (OMG) mission. 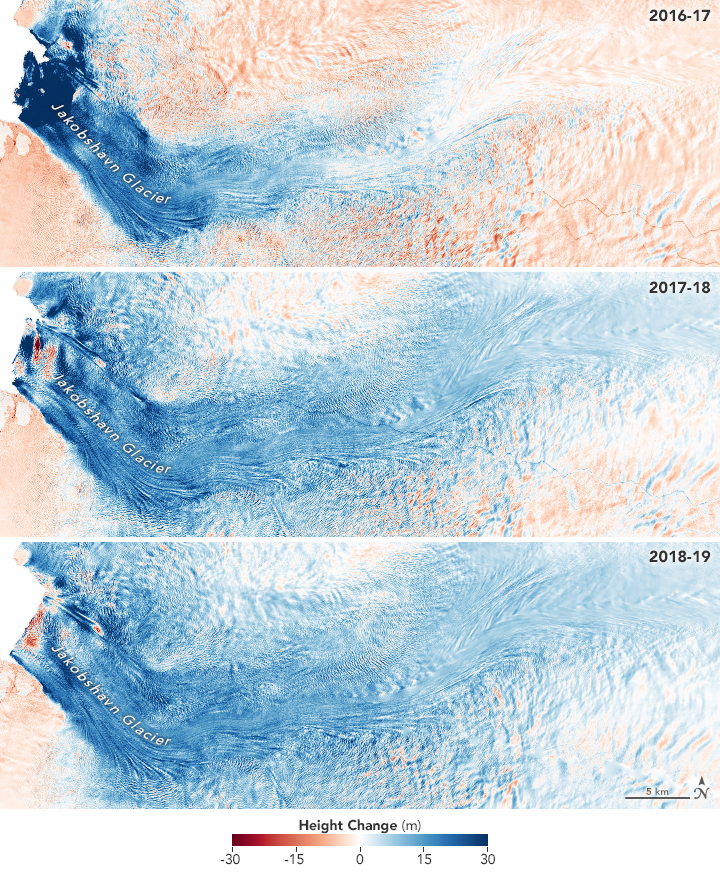 The maps above show how the glacier’s height changed between March 2016 and 2017 (top); March 2017 and 2018 (middle); and March 2018 and 2019 (bottom). The elevation data come from a radar altimeter that has been flown on research airplanes each spring as part of OMG. Blue areas represent where the glacier’s height has increased, in some areas by as much as 30 meters per year.

The change is particularly striking at the glacier’s front (solid blue area on the left) between 2016 and 2017. That’s when the glacier advanced the most, replacing open water and sea ice with towering glacial ice. The glacier has not advanced as much since then, but it continues to slow and thicken.

Willis compared the glacier’s behavior to silly putty. “Pull it from one end and it stretches and gets thinner, or squash it together and it gets thicker,” he said. The latter scenario is what is happening now as the glacier slows down: Notice that by the third year, thickening is occurring across an increasingly wide area.

Willis and colleagues think the glacier is reacting to a shift in a climate pattern called the North Atlantic Oscillation, which has brought cold water northward along Greenland’s west coast. Measurements of the temperatures collected by the OMG team show that the cold water has persisted.

“Even three years after the cold water arrived, the glacier is still reacting,” Willis said. “I’m really excited to go back this August and measure the temperature again. Is it still cold? Or has it warmed back up?”